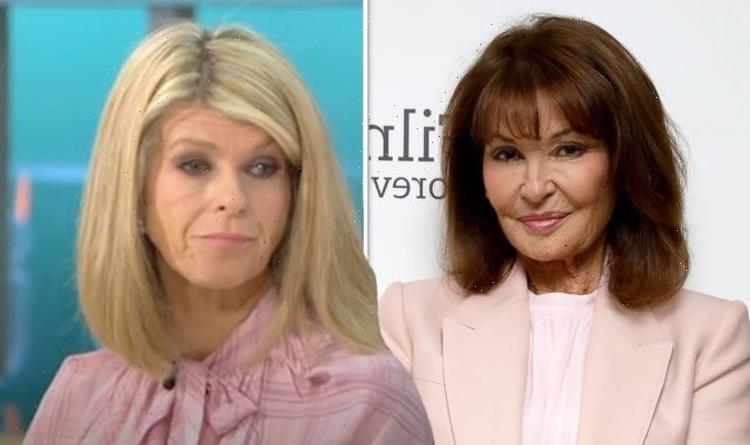 Kate Garraway’s husband Derek Draper, 54, was in hospital for over a year after he was struck down with coronavirus. He is now home, but under around-the-clock care with the help of health professionals and family.

Speaking to Express.co.uk, Stephanie Beacham, 74, has praised the 54-year-old presenter for her courage and why she chose not to contact Kate too much during the ordeal.

“I admire her so much the way she has kept everything going.

“Hats off to Kate and much love to the whole family.”

On whether she reached out to the Good Morning Britain presenter, she added: “I thought everybody would be doing that.

“I think I sent my wishes through some form or another.

“As much as that was very public, it was a close family situation.”

Back in March, Kate showed fans just how hard her husband’s health battle was in an intimate documentary titled Finding Derek.

At one point, the former lobbyist was seen in hospital receiving physiotherapy to help him regain some movement.

Derek managed to get out his first word in months, which was “pain”.

Kate also informed viewers how she was told he may not ever fully recover from his health ordeal.

Coronavirus wreaked havoc on his body and caused further health complications such as pneumonia and holes in his heart and lungs.

On Good Morning Britain today, Kate was congratulated by her co-stars after it was revealed her documentary had been shortlisted for a National Television Award.

Charlotte Hawkins said to her: “We must mention, you have obviously got first-hand experience of dealing with the aftermath of coronavirus and what that can mean for someone, with Derek and the family.

“And congratulations to you, your authored documentary, Kate Garraway: Finding Derek has been shortlisted for a National Television Award and very well deserved.”

The mother-of-two said it was “wonderful” news and she hoped her spouse could attend the ceremony next month.

She said: “I was just thinking, I was just looking, the ceremony is on the 9th of September it says there and wouldn’t it be wonderful if Derek was well enough to come.

“Wouldn’t it be wonderful. I was trying to work out the dates and see the logistics of how that might work.”

She went on to say she “didn’t think for a moment” they’d win due to the other brilliant work in the category, but would love to have Derek by her side.

“I’ll start planning how that might work,” she added.