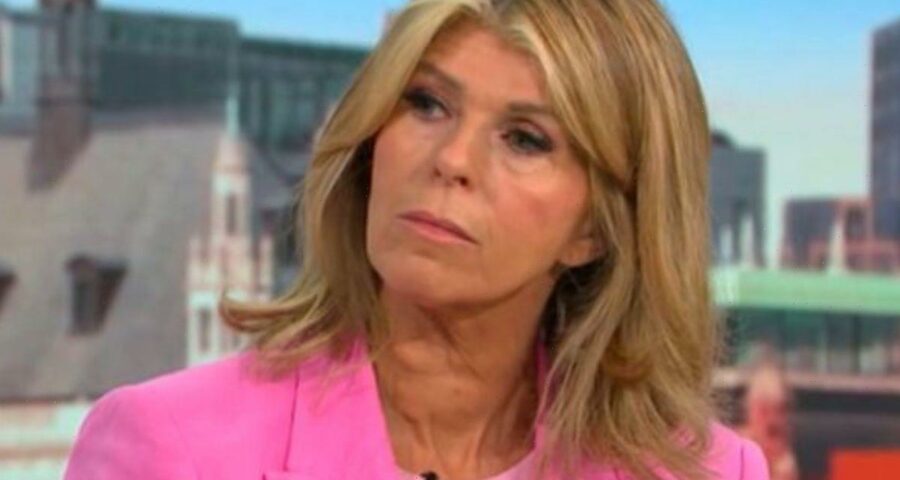 Kate Garraway, 55, revealed in a special hospital broadcast that husband Derek Draper has been offered follow-up appointments which will be dated “four years from the impact” of his initial diagnosis. The Good Morning Britain star was putting on a brave face yesterday as she revealed to her fans that she has just purchased a six-foot tall Christmas tree.

Kate shared a photo of herself grappling with the giant tree with a huge grin on her face after bringing it home.

She joked to her 1.1 million followers: “So they say it takes a village to raise a child .. but how many does it take to ‘raise’ a Christmas tree?

“Well in my case (altogether now sing along) … ‘5 exasperated shop workers, 4 helpful neighbours, 3 frazzled parents, 2 over excited kids & NOT a partridge in a pear tree, but a #peugeot308sw with a surprisingly large boot!”

The TV host, who was wrapped up warmly in a festive looking red velvet blazer, quipped: “Even my own mother didn’t believe I could get a 6 foot tree in but I knew my Percy Peugeot wouldn’t let me down!!”

She added that it “really is starting to look a lot like Christmas”, as she admitted that the giant tree had been a treat for her children, Darcey and William.

“So worth it to see the kids so happy – at last ready for #christmas – well “ish,” she wrote.

The news comes after she issued a health update revealing that Derek had finally received appointments for 2023 and 24.

Talking from Whiston Hospital in Merseyside, during a special broadcast of GMB, she explained: “Finally got into the Long Covid clinic after a year-and-a-half to an amazing group of people that are working on the impact of Covid damage.

“The appointments have now come through for 2023 and 2024, so you’re talking about four years from the impact!”

She has been caring for Derek ever since his initial diagnosis of Covid in early 2020.

His health has continued to cause concern ever since he first fell into a coma, with him recently recovering from a severe bout of sepsis which had left Kate frantic.

It has now been reported that the GMB star has hired a special chef to make Christmas extra special for the family as they await Derek’s recovery.

Fans flooded her latest Instagram post with “support, admiration and love”, which has been coming regularly ever since she documented her battle with her husband’s health publicly in the documentary Caring for Derek.

As fans saw scenes of her interacting with him as he sat in a wheelchair in the garden and laying in bed, she admitted that life with him was a “constant struggle”.

She won a National Television Award for the documentary in 2021, but admitted in her follow-up speech that she wished the painful TV show had never had to be made.

Kate was also awarded an MBE in the 2022 honours list, but admitted that it was “bittersweet” as her situation with Derek had been so “grim”.

She lamented in one interview, for You magazine, “How many nights did I pray: ‘Please let him live’? And he did live, and he is home, so from there on anything else is a bonus.”

Kate also admitted that the devotion between the pair is as strong as ever, despite the fact that at times he can communicate no more than a couple of words in a whispered tone.

“I’m not sure that we’ve ever fallen out of love, but I think a new path is emerging, a new way to be in love,” she marvelled.