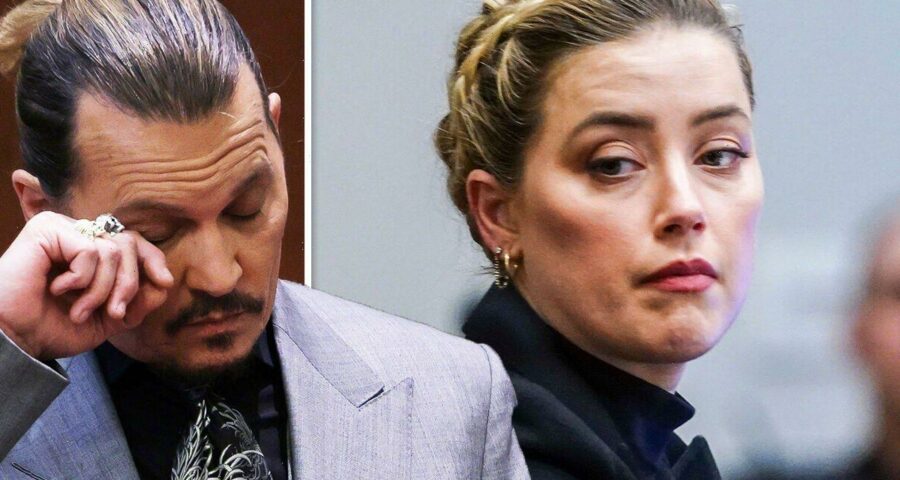 Johnny Depp has gone into detail about rows with his ex-wife Amber Heard as pictures of his severed finger and bruised face were shown in court yesterday. After two days on the stand in the £50 million court case, the Pirates of the Caribbean actor, 58, claimed to the court how his ex-wife had thrown a bottle of vodka at him which had severed his finger while a picture of Depp’s bruised face was also shown to the court as he told them it was caused by a “roundhouse punch” from his ex-wife, two weeks after the injury to his finger.

Blood was pouring out

A graphic snap of Depp’s bloody finger was shown to the court as he relayed a row he had with Heard during 2015 shortly after they were married.

The court heard that the couple rowed during a trip to Australia seven years ago while Depp was filming Pirates of the Caribbean: Salazar’s Revenge.

Aquaman star Heard had previously described the trip as a “three-day hostage situation” and claimed that her ex-husband had been abusive to her during their time in Australia.

Depp claimed in court that his ex-wife had been upset about conversations about pre and post-nuptial agreements.

The Fantastic Beasts star said that he locked himself in one of the rented home’s many bedrooms and bathrooms while Heard was “banging on the doors, screaming obscenities”.

He added that she eventually walked away and he left one of the rooms to go to a bar in the house, describing himself as a “wreck” and a “mess”.

He told the court how he had “stiff” shots of vodka before claiming that Heard “started screaming” at him again after having found him.

Depp went on to claim that his ex-wife “hurled” the bottle at him, and it smashed behind his head.

The Dark Shadows actor told the court how he had another shot from a larger bottle while Heard was “flinging insults” at him, before she also threw the second bottle at him.

Depp claimed it shattered and some of it hit his finger, adding that he initially felt “no pain” but when he looked at his finger but saw it had been severed.

He told the court: “Blood was pouring out.

“I think I went into some sort of … I don’t know what a nervous breakdown feels like, but that’s probably the closest that I’ve ever been.

“Nothing made sense,” he said, adding that his finger looked like “Vesuvius” following the incident.

Following the incident, Depp was taken to a hospital where he said to doctors that his finger had been caught in accordion doors.

He told the court he lied because he “didn’t want to get [Heard] in trouble”.

Heard has not yet taken the stand and denies causing the wound.

During court, he held up his right hand and said that it was “the funny looking [finger]” which had been injured.

Depp also told the court that his ex-wife had injured him with a “roundhouse punch”, claiming that at times she had “pure hatred” for him during arguments.

The court also saw a photo of Depp’s face with a bruise on his cheekbone.

The star claimed to the court that he sustained it through a “kind of a roundhouse punch from Ms Heard”, adding that it was taken two weeks after his finger was severed.