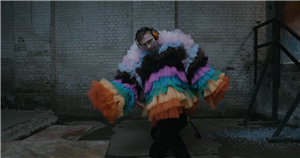 Comedian Joe Lycett recently made headlines over his criticism of David Beckham's multi-million partnership with the World Cup in Qatar.

Joe, 34, said that if Becks, 47, had put an end to his controversial ambassadorship he would donate £10k to LGBT charities, but if not he would shred the money.

He appeared to make good on his promise, and tweeted a video of himself shredding a huge a mount of cash, before later revealing that he had not shredded any money, but had already donated it.

In a video explaining the stunt, he said: "I never expected to hear from you. It was an empty threat designed to get people talking. In many ways, it was like your deal with Qatar, David – total b******t from the start."

However, despite his criticism of the former England Capitan, Joe has previously performed gigs in Qatar and written about this in his memoir Parsnips, Buttered, reports The Sun.

Poking fun at the country's anti-gay laws, he wrote: "I was performing stand-up in Dubai, Abu Dhabi and Qatar.

"Friends of mine had warned me about travelling to these countries, claiming that ‘they don’t like’, as one friend put it, ‘your lot’.

"The punishment for homosexuality in these countries is oft jail, the logic of which I’ve never understood. Oh, you like men? We’ll put you in a box with some’. Not exactly a punishment, lads!"

Taking to Twitter both fans and critics of the comedian shared their disappointment, with one writing: "I don’t understand #JoeLycett – he mercilessly called out #DavidBeckham and then we find out that he himself has done gigs in Qatar and UAE. Why be such a hypocrite?"

Another wrote: "So disappointed to wake up to the news that @joelycett himself sold his soul to Qatar for the dollar. Another self righteous hypocrite. Where have all the good men gone?"

While a third added: "Joe has also done shows in Qatar/UAE and taken their money. David beckham just followed in his footsteps. Hypocrite."

Since the story broke, Joe has released a statement on his Twitter account, which reads: "I did two gigs in Doha in 2015 and kept it entirely secret by writing about it in my book and mentioning it in multiple interviews including with the NY Times!

"If you're interested I was paid a few hundred quid (not by Qatar but by UK comedy promoters) but it was 2015 and that went a lot further back then.

"I reckon that if a popular comedian from those days (e.g. Shane Ritchie) had shredded a few hundred quid to persuade me not to go, it would have made a difference."

OK! have contacted reps for Joe Lycett for further comment.