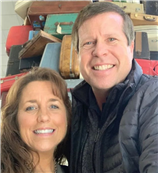 Over the course of the past five months, we’ve heard all kinds of reports about how various members of the Duggar family are coping in the aftermath of Josh Duggar’s arrest on child pornography charges.

While Jinger Duggar hopes justice is served, and Jill wants the world to know she’s living her best life, for the most part, the family has been steering clear of social media, which probably means they’re having a difficult time.

That might not be out of sympathy for Josh, by the way.

The arrest has created professional crises for several Duggars, some of whom are without any means of support following the cancelation of Counting On.

And among those who might be feeling deeply concerned about their future earning potential is the patriarch himself, Jim Bob Duggar.

Not only has Jim Bob’s primary source of income been stripped away, he has the added financial burden of shelling out for Josh’s legal defense.

All of this while JB and wife Michelle still bear at least some responsibility for 18 other children, several of whom still live at home.

And there’s also a good chance that the damage to the family’s reputation will have a profound effect on Jim Bob’s other businesses, such as his used car dealership and his real estate company.

Not surprisingly, it seems that all of this has been putting quite a strain on Jim Bob and Michelle’s marriage.

“They aren’t as close as they once were because of all of Josh’s legal drama,” a source close to the situation tells People magazine.

“It’s creating a lot of stress on them — although the majority of the family is acting like nothing has happened.”

“Jim Bob always wants to sweep things under the rug,” the insider said.

“He’s never going to talk about the scandal because it’s bad for business.”

And if Jim Bob is having trouble coping already, then he’s really gonna have a tough time in the months ahead.

Josh’s lawyers have had his trial pushed back from July to November, and insiders have claimed that Jim Bob is not happy about the postponement.

Apparently, he feels the extra months will give the scandal more time to build, and that the extra prep time won’t do much for Josh’s chances of beating the case.

For once, Jim Bob might actually be right on both counts.

There have been rumors that Jim Bob has encouraged Josh to accept a plea deal, but that seems unlikely at this point.

And so, come November, Josh will enter an Arkansas courtroom facing 20 years behind bars.

If his parents’ marriage is strained already, then the trial — and the seemingly inevitable guilty verdict — will surely put their bonds to the test.

Divorce is strictly forbidden in the Duggars’ world, of course — but when they took their vows, we doubt Jim Bob and Michelle expected that they would ever face a challenge like this.