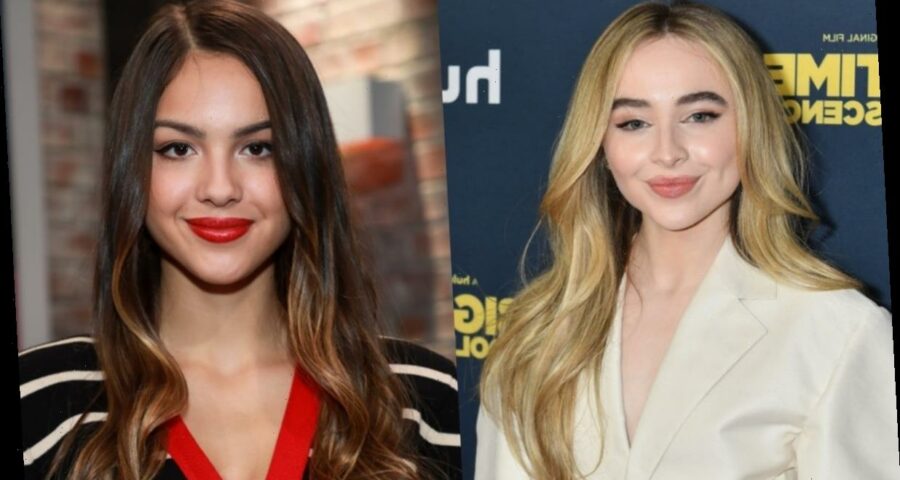 If you’ve been anywhere online these past few weeks, you’ve probably seen the theory Olivia Rodrigo’s "Driver’s License" is about her rumored ex Joshua Bassett. The lyrics hint the person who inspired the song is another celebrity, so naturally, fans assumed she was talking about her High School Musical: The Musical: The Series co-star, who is supposedly dating Sabrina Carpenter now (presumably the blonde Rodrigo sings about on the track). On Friday, Jan. 22, the Disney Channel alum dropped an emotional new single, and fans are convinced it’s her response to "Driver’s License." So, is Sabrina Carpenter’s "Skin" about Olivia Rodrigo? Let’s unpack the lyrics and see.

Rumors began swirling Bassett and Carpenter were an item after they were seen getting cozy together in public in July 2020. Although Bassett and Rodrigo never confirmed they dated, fans had a feeling "Driver’s License" was about him and his rumored new girlfriend thanks to a few details in her lyrics. The line, "Guess you didn’t mean what you wrote in that song about me," seemed to allude Bassett’s love songs like "Common Sense" and "Anybody Else," while the older "blonde girl" lyric seemed to be a reference to Carpenter herself. When asked if "Driver’s License" was about the pair, Rodrigo dodged the question, which only added to the speculation.

Days after "Driver’s License" debuted at No. 1 on the Billboard Hot 100 chart, Carpenter announced a new song, and fans wrote things like "THE TEA IS HOT," "THE DRAMA," and "An answer maybe," thinking it’s her response to Rodrigo. Now that Carpenter’s new song, "Skin," is here, fans are pretty certain it’s her response to "Driver’s License." The track isn’t so much a diss track or clapback as it Carpenter’s chance to tell her side of the story, which is seemingly that she feels like she was dragged into the spotlight over a situation she wasn’t necessarily at fault for.

Right from the start, the former Girl Meets World star sings, "Maybe we could have been friends if I met you in another life," suggesting she’s not out to start an all-out war. But things do get pointed when she sings, "Maybe you didn’t mean it / Maybe ‘blonde’ was the only rhyme."

In the second verse, Carpenter seems to suggest there’s more to the story, singing: "You’re tellin’ it how you see it / Like truth is whatever you decide / Some people will believe it / And some will read in between the lines."

If the song is about Rodrigo, the overall message seems to be that if she wrote "Drivers License" to get under Carpenter’s skin, it wouldn’t work because she’s spent her life in the spotlight with people speculating about her. "You’re putting me in the spotlight / But I’ve been under it all my life," she sings.

Carpenter seems to level with Rodrigo in the end, understanding that she needed to get whatever feelings she was feeling off her chest, but standing by her right to tell her side too, singing in the chorus, "And I’m not asking you to let it go / But you been tellin’ your side / So I’ll be telling mine." She even expresses hope that they can look back on this situation and laugh one day:

Whatever point of this messy love triangle resonates with you, everyone can agree these ladies are epic songwriters. Check out Carpenter’s song for yourself and you’ll see.