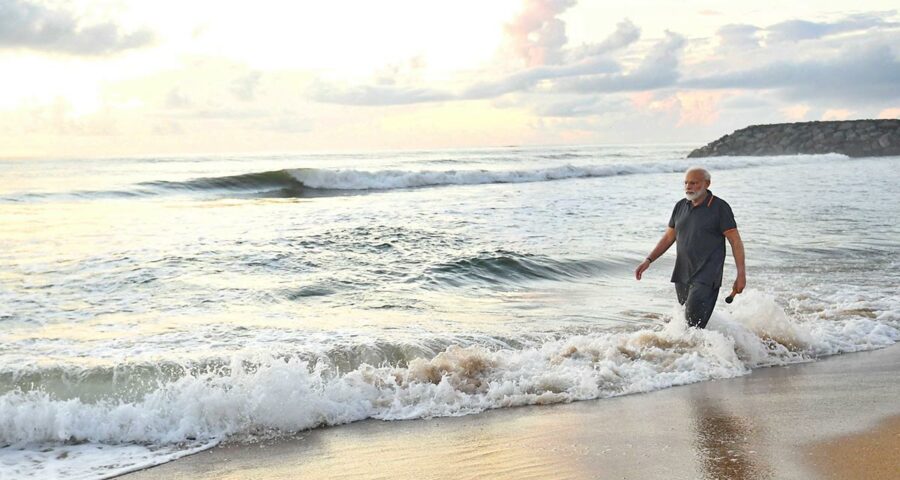 Until he read Indien: Der Süden (India: The South) in July this year, Andreas Stieger from Switzerland hadn’t even heard of Mamallapuram (or Mahabalipuram). For him, a trip to India as a tourist meant visiting the Taj Mahal.

The travel guide written in German, he says, opened his eyes to the other wonders of India. “Since I was on a solo trip, I decided to go to a lesser-known destination, and headed down South. The book marked it (Mamallapuram) as the most important destination in South India,” he says pointing to the guide that he is carrying with him on his excursion to the town’s famed Shore Temple. In 2021-2022, Mamallapuram emerged as India’s top destination for foreign tourists, according to the Indian Tourism Statistics 2022.

The temple town, some 57 km from Tamil Nadu’s capital, Chennai, pipped the Taj Mahal, which came in second.

Among ticketed monuments, Mamallapuram’s Group of Monuments — a collection of 7th- and 8th-century religious structures — attracted 46 per cent of the total foreign tourists who visited India compared to 12 per cent by the Taj.

An obvious reason was Covid and tighter travel restrictions that spoiled the show for India’s most recognisable monument, Agra’s ivory-white marble mausoleum, during the first half of 2021-2022.

In the pandemic year of 2020-2021, the excavated remains at Nalanda in Bihar had stolen the top spot, with Mamallapuram coming in fifth and the Taj Mahal a distant eighth. The mood in the town is, naturally, upbeat.

The locals say it was the historic meeting between Prime Minister Narendra Modi and Chinese President Xi Jinping in October 2019 that changed the fortunes of this UNESCO world heritage site.

The leaders had then visited the Shore Temple, the Pancha Rathas, which depict monolithic Indian rock-cut architecture, and Arjuna’s Penance, a giant open-air rock relief carved on two monolithic boulders.

The Chess Olympiad, hosted here in August, also added weight to the coastal town’s resume. This was the first time India had hosted the Olympiad.

“Since the Xi-Modi visit and the recent Chess Olympiad, we have got huge word-of-mouth publicity,” says P Ponnuchami, a tourist warden with the Tamil Nadu government.

The fact that the scenic and steeped-in-history Puducherry is only 95 km from Mamallapuram also works in its favour.

The foreign tourist inflow is largely from the United Kingdom, the United States and Germany, while Bengaluru, Mumbai, Kolkata and Delhi make up a chunk of domestic travellers.

Mamallapuram’s accessibility and affordability, say those in the tourism business, are the main reasons it is becoming a preferred destination.

“From Bengaluru, it is just a seven-hour drive, so travellers from there tend to club Mamallapuram and Pondicherry,” says Amit Kumar, general manager, Sheraton Grand Chennai Resort and Spa.

“In the last three months, we have seen both domestic and international travel opening up. If I were to compare with last year, I’d say there is a close to 70-75 per cent increase,” he adds.

Traders, too, say business has improved since last year. “Our revenue has increased by 37 per cent. Major industries like tourism, sculptures and food are picking up,” says A M Vikramaraja, president of Tamil Nadu Vanigar Sangankalin Peramaippu, a traders’ union.

Tourism and the marine industry are the major contributors to the region’s economy. Prasanth, an autorickshaw driver who gives only his first name, says he now makes more than Rs 1,500 per day compared to Rs 500 during the same time last year.

Some, however, say things could be better. “We are not seeing a major change in terms of sales. It is only 40 per cent of what it was before Covid,” says Jagdish K, owner of The Boutique, a handicraft shop in the Shore Temple premises.

Beach shacks that sell handicraft and food, too, say sales are low.

“We expect things to pick up after the festival season since Covid is almost over,” says Sugandhi P, who sells fried fish from one such shack. For the Chess Olympiad held in August, the Tamil Nadu government had invested around Rs 100 crore (Rs 1 billion) in developing roads, including the East Coast Road.

In addition to this, around Rs 15 crore (Rs 150 million) was spent on sprucing up the infrastructure.

During the Olympiad, over 3,000 delegates from 187 countries, including 200 mediapersons, visited Mamallapuram. The world’s eyes were on the town.

“The proximity to Pondicherry, presence of an international airport (at Chennai) and multiple tourist destinations at the same location have become an advantage for the town,” says Rahul Nath, the collector of Chengalpattu district, where Mamallapuram is located.

“We are now looking to improve the infrastructure. Around Rs 60 crore (Rs 600 million) will be invested on a new bus stand and we will soon also introduce adventure sports at Kovalam Blue beach.”