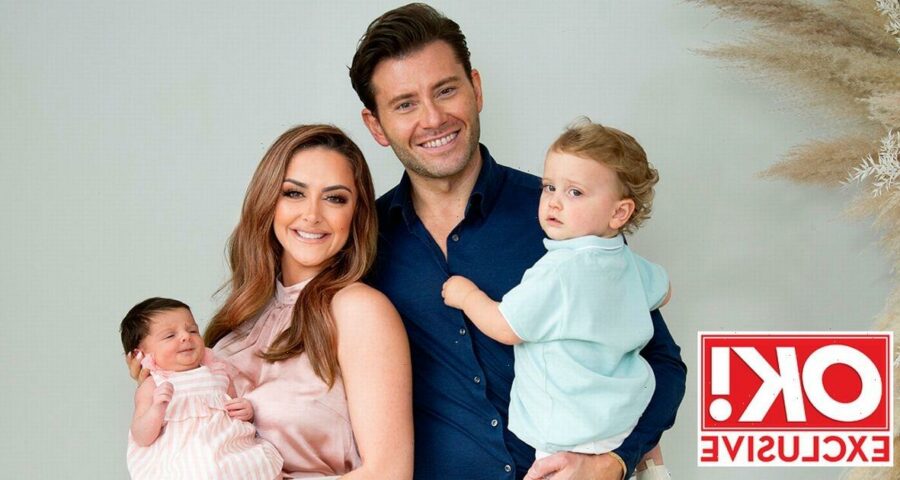 Real Housewives of Cheshire stars Hanna and Martin Kinsella have had a lot on their plate since welcoming newborn daughter Kimia to their brood – which already consists of 15-month-old son Maximus James – but it sounds as though the pair have taken it all in their stride.

Speaking exclusively to OK! during our shoot this week, Hanna, 34, and Martin, 32, let us in on somewhat unconventional aspects of their new-born daughter Kimia Rose's birth story including the son that was playing she was born and the reason behind Hanna's glamorous appearance!

Hanna said: “The night before the section, Martin and I actually went for a romantic meal. We went to a place in Manchester called Australasia. It’s one of our favourite restaurants. It was lovely to have that quality time together, because it’s tough now.

She added: “We also made a little playlist the night before, so we had that playing in the theatre and it was just so chilled. The surgeons were just chatting to us and it was so weird, as the last time was a blur.” So, can they remember what song was playing when Kimia was born?

“It was a bit of a blur but we think it was Westlife’s Flying Without Wings! We went for some relaxing love songs and power ballads, like Prince’s Most Beautiful Girl In The World and Elton John’s The Way You Look Tonight, which was the song for our first dance.”

And Hanna admits there were some watery eyes when little Kimia arrived, saying, “We both shed a little tear. We both got dead emotional.”

And we couldn’t help but notice how remarkably fresh-faced Hanna looked in the snap she and Martin shared of themselves with Kimia just moments after she was born.

“Well, it was a lot different this time,” adds Hanna. “I had a blow-dry the day before and I was feeling all good. I could put a bit of mascara on and feel a bit human!”

Hanna – who opted for a C-section with her second child after having complications with the birth of son Maximus – explained: "Last time, I had a non-progressive labour and my cervix didn’t open, and they said the same could happen this time.

"I was in labour for 18 hours and in a lot of pain with no progression. I didn’t want to go through that again. It felt like a very, very different experience this time. However, Martin adds, “But it was almost more nerve-wracking this time, in a way, as you had more time to think about it.”

And his wife of almost three years agrees, replying, “Yeah, I was anxious as I knew exactly when it was going to happen. You’re more aware, so it’s scarier.

“The first time, I don’t remember the pulling and tugging as much. This time it felt like they were doing the washing up in my stomach! It was horrible!”

Hanna also shared the news that their baby girl's name was inspired by Hanna’s Persian heritage.

“It’s an ancient Persian name,” she explains. “I’m Persian and my parents are both from an Iranian background. It means unique or rare, and it also means alchemy or the philosopher’s stone, so it has a lovely meaning behind it.”

The cosmetic dentist, who runs her own clinic, continues, “My mum was reading an ancient Persian poetry book and one of the characters was called Kimia, and I remember thinking, ‘That’s such a beautiful name and very unusual.’"

Cosmetic doctor Martin, who has clinics in the UK and Majorca, says, “Hanna was so happy we had a girl because she’s got to use that name. When we had Max, if he was a girl we were going to call him Kimia. Hanna really wanted a daughter.”

“And now I’ve got her I feel very lucky,” adds Hanna. “She’s a little dreamboat and we’re blessed to have one of each.” The couple’s 15-month old son Maximus James has been “so intrigued” by his little sister since her arrival.

“When we got home, Max came straight over to the car seat and just kept looking at her and stroking her,” gushes Hanna.

“He’s so gentle with her. He’s still so young but he understands that she’s a baby and she’s precious, and he can’t be rough with her,” adds Martin.

“The house has been absolute madness,” laughs Hanna. “It’s been full-on and we’re shattered but I’ve been feeling good and we’re just so in love with her.”

For more updates on Hanna and family, sign up to OK!'s daily celebrity newsletter.