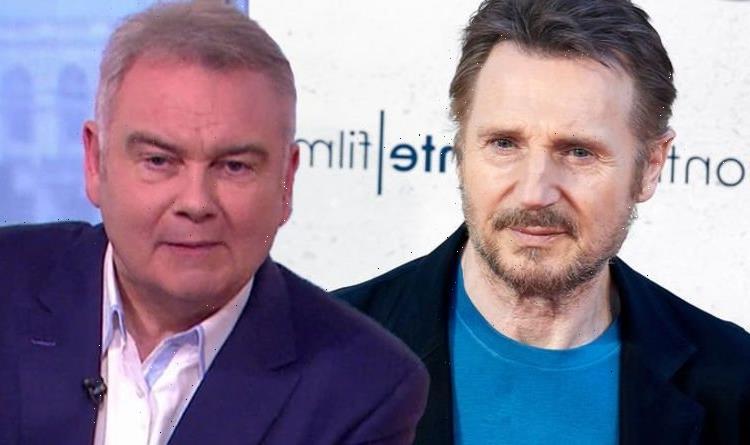 Eamonn Holmes, 51, has received help from none other than Liam Neeson, 69, who has encouraged the presenter to keep moving. The This Morning host has been dealing with chronic pain for many months and has now discussed the importance of keeping mobile to help alleviate the symptoms.

That’s why he keeps doing his action films

Discussing why people find chronic pain worsens in summer, due to dehydration and a lack of movement, Eamonn revealed that actor Liam gave him some great advice that “rest is rust and motion is lotion”.

He told wife Ruth Langsford on the show today: “I live by that motto, I do – don’t I always say that? Motion is your lotion.”

“I sat beside the actor Liam Neeson on a plane and he said to me, ‘Eamonn, remember this, motion is your lotion’.

“That’s what he said, he said to me that is why he keeps doing his action films.

“And Liam and I are like-minded on this sort of thing, that exercise is it all.”

Eamonn has been in agony for months and has documented his health online.

The star’s discs have “eroded” in his back and therefore it makes sitting down increasingly difficult.

On filming difficulties, Eamonn shared: “I’ve got some discs that have eroded in my back.

“Apparently sitting down is the back’s worst enemy.”

The presenter has been battling chronic pain for a long time, after dislocating his pelvis, but in recent months has been left unable to sleep.

He told the Irish Independent that the injury happened “mysteriously”, and his back is now “out of alignment” because of it.

“My back is now out of alignment as a result.

“Nobody knows what it’s like unless they live with someone who has it. I’m in huge pain and nobody knows how to stop it.”

He added that the pain “hurts like hell” and that he needs to find a way to overcome it.

“It has lasted a month and it feels like I can’t remember what life was like without it,” he said.

Meanwhile, the star recently appeared in Celebrity Gogglebox, despite being left “hurt beyond belief” after they replaced a moving story about his dad with a funny tale.

Eamonn was left upset after bosses made an “idiotic and cruel edit” following his appearance on the show.

He was seen on the Channel 4 offering alongside his wife and This Morning co-presenter, Ruth watching scenes from the BBC’s Ambulance programme.

The episode saw a boy save his father’s life by calling 999 and resuscitating him, following a suspected heart attack.

After the show, the broadcaster tweeted his anger that his own story about his father did not feature, and addressed some criticism for his response to the scene.

He said: “In reply to a number of complaints… I am hurt beyond belief that @C4Gogglebox chose not to use me talking about my father dying from a heart attack at the side of a road and replace it with a funny story following a young lad giving his father CPR.”