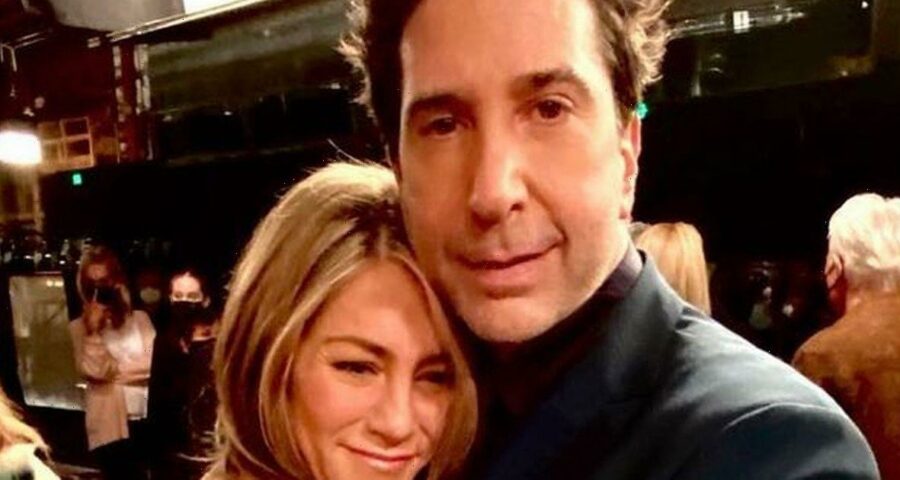 Friends actress Jennifer, 53, who plays Rachel Green on the hit show, shared the picture on Instagram earlier this week and captioned the steamy shot by saying: “Something’s coming 9.8.22”.

David, 55, famed for playing Jennifer’s onscreen boyfriend Ross Geller, then hilariously recreated the picture and in response to Jennifer, he penned: "@jenniferaniston – a towel I hope??"

His funny recreation was a hit with fans who were even more surprised when Jennifer commented on his animated version as she quipped: "Schwim!? Trying to steal my thunder!?"

The Hollywood star re-shared David's comical version on Instagram Stories with a laughing face emoji and a love heart.

Thrilled fans eagerly flocked to the comment section. One person gushed: “Marry him”, as another wrote: “I don’t even know what you’re referring to but is this REAL LIFE flirtation?” with a fingers crossed emoji.

“You guys are the perfect couple”, a third added, while a fourth jokingly chimed: “It's been more than a decade and you two still can't get along.”

The two played arguably the most iconic on-again-off-again pop culture couple as they starred as Ross and Rachel in hit 90s sitcom Friends from 1994 to 2004.

Last year, David and Jennifer revealed they had a "major crush" on each other during the Friends reunion special.

The duo reunited for the 25 year anniversary special episode to celebrate the huge success of the show.

During the special episode, fans went wild as David and Jennifer confessed they each had a "major crush" on one another when they were filming the series.

David told the special's host James Corden: "I had a major crush on Jen," to which she replied: "It was reciprocated."

David then added: "We were both crushing hard on each other, but it was like two ships passing. One of us was always in a relationship and we never crossed that boundary."

Since their confession, the rumour mill has gone into overdrive about sparks of a romance between the pair.

A source previously claimed to Closer magazine: "After the reunion, it became clear that reminiscing over the past had stirred up feelings for both of them and that chemistry they’d always had to bury was still there.

"They began texting immediately after filming and, just last month, David flew from his home in New York to see Jen in LA."

However, a representative for David told The Sun there was "no truth" to the claims of a romance between the pair.