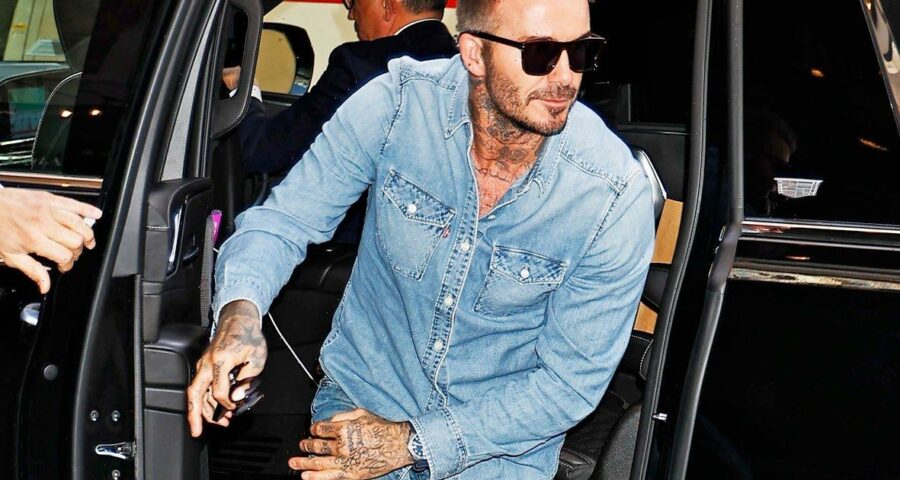 Victoria and David Beckham looked in sync this week as they stepped out in New York City in outfits reminiscent of Justin Timberlake and Britney Spears’ infamous 2000s double denim look.

Victoria stunned in a baby blue silk dress with an asymmetrical hemline and ruched detailing, pairing the outfit with chunky black sunglasses and open-toed boots that looked like chain mail.

Meanwhile, David, 47, looked as dashing as ever as he exited a black SUV in head-to-toe denim and light brown suede boots.

This week, Vogue magazine released an exclusive interview with Victoria, 48, who spoke on the relationship between fashion and her kids while also revealing her daughter Harper’s "finest fashion moment.”

She said: "I was looking at some pictures actually of the kids at the shows over the years and there is this one picture and it's Anna [Wintour] and Harper sitting on David's lap, and Harper has her entire finger up her nose.

“The entire finger, in fact, it may even be her fist up her nose. It was one of Harper's finest fashion moments that I might have to get framed for her, she'll be mortified!”

She added: "I love having the kids around the house because it's really inspiring to see what the kids like. With Brooklyn and his wife recently walked in [and sat front row] in the show which was fantastic to watch.”

The former Spice Girls singer continued to explain how each of her kids has a different relationship with fashion and creativity.

For instance, while Romeo has shot a couple of campaigns for Saint Laurent, he also enjoys football like his father.

Victoria continued: And then there's Cruz he wants to be a music artist, he writes his own music, he loves fashion, he's the one who tells me when Supreme are doing their latest drop.

Posting the clip to her own Instagram, she told her 30.3m followers: "Thank you @voguemagazine and Anna Wintour."

At the time, Victoria is said to have squashed the feud between herself and Nicola.