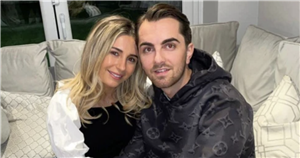 Dani Dyer didn't turn up to see her ex-boyfriend Sammy Kimmence in court after he was jailed for 42 months.

The 25 year old split from Sammy, also 25, after he was sent to prison for conning two pensioners out of thousands of pounds.

On Thursday, the father of Dani's son Santiago was back in court and ordered to sell £55,000 worth of his designer goods in order to pay back the money stolen, but the Love Island winner was not in attendance.

The Sun reports that Sammy only spoke to confirm his name during his appearance at Portsmouth Crown Court, standing "motionless" in the dock as he wore a navy blue jumper and tracksuit bottoms, with a mask covering his face.

Dani, who won the hit ITV2 dating show alongside Jack Fincham in 2018, initially stood by her man after he convinced her his crimes were "not that serious."

However, she left him after realising the severity of his actions as he was jailed for three and a half years.

It was said at the time that Dani was "distraught" by Sammy's sentencing after he "lied to her about his crimes" before being sent to prison.

On Thursday, a judge ordered the ex-stockbroker to hand over several luxury designer items worth £5,009.

These items include a £699 personal license plate, two Louis Vuitton bags, jewellery, designer clothing and three high-end trainers, which were said to make up a "vast sum" of the sum he owes back.

The rest of the amount he owes from conning the two men, which Portsmouth Crown Court heard was a total of £54,859.22, will be paid back as soon as he begins earning money following his release from prison.

The latest development means that Dani will not face a police visit to her home to confiscate Sammy's assets to pay for his crimes.

A previous report from The Sun claimed that financial forensics would visit Dani and her ex Sammy's home to make an inventory of his assets in order to raise the funds he conned out of his unassuming victims.

For the latest news on Dani Dyer, be sure to sign up to OK!'s daily celebrity newsletter.