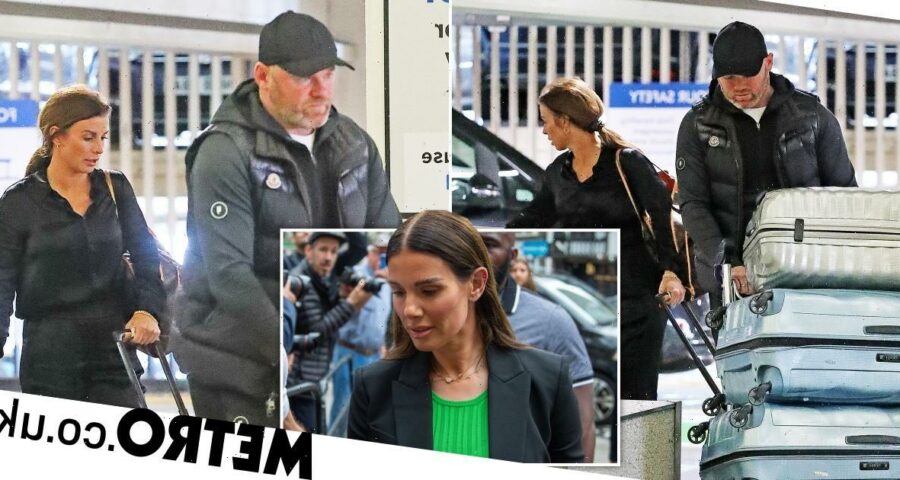 Coleen and Wayne Rooney are en route to Dubai to start their early summer holidays with the children, hours after the final day of the Wagatha Christie trial kicked off.

The married couple were noticeably absent at the High Court of Justice on Thursday morning, where the closing arguments were to be heard from Coleen and Rebekah Vardy’s respective barristers.

It turns out that the Rooneys decided to hop, skip it over to the United Arab Emirates, and were seen arriving at Manchester airport for their travels this afternoon.

Former England footballer Wayne, 36, took charge of lugging their hefty suitcases that were piled on top of each other on a trolley, while wife Coleen, also 36, managed to pull two other cases while navigating walking with her medical boot following a foot injury.

The couple have been joined by their four children, sons Kai, 12, Klay, eight, Kit, six, and Cass, four, and Coleen’s parents Colette and Tony McLoughlin.

It’s said that Coleen and Derby County manager Wayne had booked their holiday assuming the trial would conclude on Wednesday, as it was previously scheduled to. Coleen’s lawyer David Sherbourne told the High Court that the couple would not be in attendance on the final day due to a ‘long-standing travel arrangement’.

They reportedly received permission from judge Mrs Justice Steyn to be absent.

A source told the Mail Online that Coleen and Wayne ‘didn’t want to disappoint their children’ by cancelling the holiday.

The couple, who married in 2008, had attended the first six days of the trial and both appeared in the witness box to testify.

Rebekah, who is married to Leicester footballer Jamie Vardy, is suing Coleen for libel after Coleen accused her of leaking ‘false stories’ about her private life in October 2019 following a months-long ‘sting operation’ which saw Coleen dubbed ‘Wagatha Christie’.

The claims have been denied by Rebekah.

Thursday’s hearing got off to a heated start with Rekebah fleeing the courtroom early just 30 minutes after proceedings began. However, she returned after nearly an hour to sit in front of her lawyers.