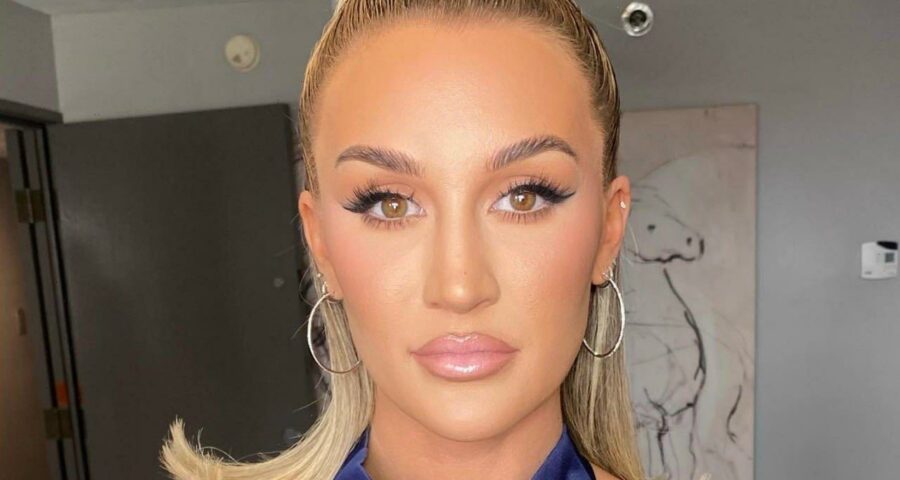 The wife of Jason Aldean appears to defend herself again in an Instagram post promoting her ‘Don’t Tread On Our Kids’ sweatshirts and tees after catching heat with her comments on transgender.

AceShowbiz -Brittany Aldean a.k.a. Brittany Kerr seemingly doesn’t feel a bit apologetic about her controversial remarks on transgender. The wife of singer Jason Aldean claims her words “were taken out of context” following backlash over her alleged transphobic joke.

Brittany appeared to defend herself again in a new Instagram post to promote her “Don’t Tread On Our Kids”. The post featured photos of her and her sister-in-law Kasi Rosa modeling the clothes inspired by Barbie.

In the caption, she addressed the controversy sparked by her previous social media post. “Per usual, my words have been taken out of context over the last week,” so she claimed. “Instead of getting twisted about the twisting of my words, I’ve chosen to bring some good out of it.”

The former “American Idol” contestant then announced, “Introducing our NEW Barbie inspired line LIVE NOW. Through this launch we will be giving back to and supporting @operationlightshine in effort to help fight child exploitation and human trafficking. THIS SALE ENDS FRIDAY NIGHT!!” She went on urging her followers to “click the link in the bio or head to www.brittanyandkasi.com to purchase yours.”

Brittany landed in hot water after she posted a video showing her before and after glam-up. In the accompanying message, she penned, “I’d really like to thank my parents for not changing my gender when I went through my tomboy phase. I love this girly life.”

She quickly received backlash, including from country music singers Maren Morris and Cassadee Pope. “It’s so easy to, like, not be a scumbag human? Sell your clip-ins and zip it, Insurrection Barbie,” Maren wrote, without naming Brittany.

Cassadee, meanwhile, slammed Jason’s wife as saying, “You’d think celebs with beauty brands would see the positives in including LGBTQ+ people in their messaging. But instead here we are, hearing someone compare their ‘tomboy phase’ to someone wanting to transition. Real nice.”

Brittany later accused Cassadee of “advocating for the genital mutilation of children.” She added, “Some parents want to be accepted by society so badly that they’re willing to make life-altering decisions for their children who aren’t old enough to fully comprehend the consequences of their actions.” Brittany also fired back at Maren by writing, “Karen Morris. Thanks for calling me Barbie.”

Brittany and Maren’s husbands later jumped in on the feud, with Jason and Ryan Hurd defending their respective wives.