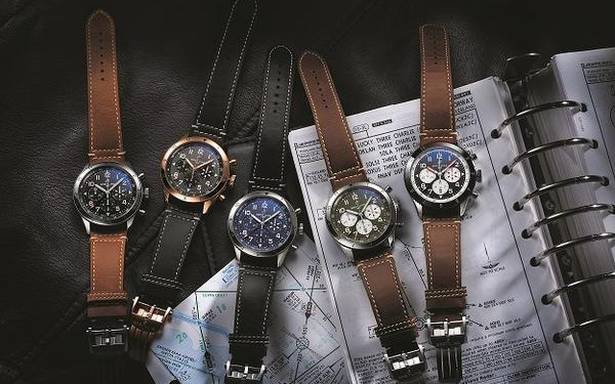 In time for Dubai Watch Week, the Swiss watch brand finds inspiration in legendary military aircraft with the Super AVI

Breitling boss Georges Kern is well aware of the importance of both ‘cool’ and storytelling when selling luxury watches. Earlier this year, he joined forces with the fashion gaming app, Drest, made strong brand connections with sports like surfing and cycling, and more recently, released a trio of Top Time watches based on cult American cars. Now, just in time for Dubai Watch Week, comes Super AVI, a new Breitling line for aviation enthusiasts. It comprises five watches inspired by four classic planes – the North American Aviation P-51 Mustang, the Vought F4U Corsair, the Curtiss P-40 Warhawk and the de Havilland Mosquito. “It is very important to attach a story to each of the lines we have in our collection, to create that emotion, in addition to the roots of the past,” Kern, CEO at the Swiss watchmaker since 2017, says at the media launch in Dallas.

The Super AVI Q&A presentation is preceded by a visually impressive marketing campaign with the legendary aircraft flying in formation into the National Aviation Education Centre. There’s a closing shot of Kern signing off from the cockpit.

Super AVI’s design was inspired by the original 1953 Co-Pilot Ref 765 Avi aviator’s watch, but the one British and three US military aircraft play leading roles. “We wanted to keep the stories of these legendary planes alive. These watches embody the sense of nostalgia for the early days of aviation when pilots relied on their watches as onboard tools,” Kern continues at the press meet. Getting the aircraft cleaned, oiled, fuelled and ready to fly six hours across the country for this campaign meant 100s of hours of maintenance and countless hours of training. Aviation specialist Taylor Stevenson marks it as a historic event – the planes, with slightly different speeds and different roles in their time, in the skies together.

“They are iconic,” Stevenson observes, adding, “Mosquito served not just with the US but many nations across the globe. There is nothing more glamorous than the blue of the Corsair. People know the camouflage of the Warhawk, the glare shield of the Mustang. There may be four Mosquito planes out there but when you wear that watch, you are part of that history.” While the legibility and visibility of the supersized watches (46mm case with a crown that can be easily manipulated with ‘flight gloves’) will make pilots and collectors happy, first-timers with much travel ahead will recognise the ease of tracking a second time zone using the 24-hour marking on the inner bezel and the red-tipped GMT hand.

While the Super AVI P-51 Mustang comes in a stainless-steel case with a black dial, and an 18 k red gold version, the Super AVI Tribute to Vought F4U Corsair’s blue dial and tone-on-tone chronograph counters reference the high-performance fighter aircraft that entered combat in 1943. The Super AVI Curtiss Warhawk’s military-green dial is distinctive, while the Super AVI Mosquito, the only one in this club with a ceramic bezel and red and orange elements is a fine tribute to the plane dubbed ‘the wooden wonder’.

Powered by the automatic in-house caliber B04 – COSC-certified – they have a 70-hour reserve and a top-stitched calfskin strap (steel bracelets coming soon). In an interview with Esquire, Kern laughingly admits to putting his money on the Mustang, adding that many at Breitling are betting on the Corsair. Back at the press, his answer to a journalist’s question is: “No, I am not a pilot, but I have flown in a lot of planes, like the Mustang… I am an earth guy, I like to be on my bicycle, but I am into aviation.” Meanwhile, with this strategy of building watches around heritage and stories working well for the brand, he says they will extend it to all their products. “People are not, by the way, walking into a store and asking for a Top Time. They say, ‘I want the Ford Mustang’. ‘I want the Corvette.’ And I am convinced that people will walk into the store and say I would like to have the Curtiss, I would like to have the Mosquito. This is how people react towards storytelling and I think it is great.”

Available in India from the first week of December at select watch retailers at ₹ 7,66,160 onwards.