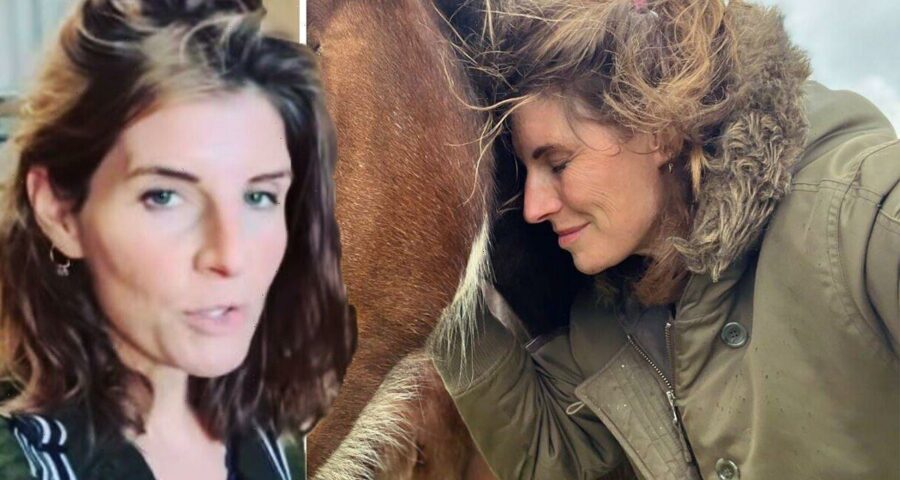 Our Yorkshire Farm’s Amanda Owen has taken to Twitter to address the “stressful time” she’s been having at Ravenseat Farm over the past couple of days. The mother of nine, 47, revealed that her Yorkshire farm has suffered a power cut for two days, at the same time her beloved horse Hazel gave birth to her first foal.

It could not have come at a more stressful time

In view of her 197,300 followers, the Yorkshire Shepherdess relayed the difficulties she’s been facing over the last few days.

“Two days without power so with regards to timing it could not have come at a more stressful time,” she penned alongside an upset face emoji.

She went on: “No phone signal & no WiFi.

“Couldn’t get in touch with the people that I had on standby.

“Not even a quick brew @YorkshireTea when sorted.

“Said a prayer,” she ended her post, alongside a praying hands emoji.

Amanda shared a couple of snaps of herself hugging her horse Hazel who had just given birth.

The TV star gently rested her head on the brown animal’s flank as she leaned into her neck.

The next snap featured the newborn foal as it stood behind its mother.

The Yorkshire Shepherdess had her eyes closed as the harsh winds blew her highlight hair around her face.

It comes after Amanda shared a video of her horse’s first foal just moment after it was born.

The brief clip captured Hazel tenderly licking the newborn as the young foal struggled to get to her feet.

However, after gentle nods of encouragement from her mum, she shakily stood up and had her first feed.

Twitter user @shand_alison replied to the video: “That’s good to see. Thanks for the update,” prompting Amanda to detail the “stressful time”.

“Ouch. Timing could definitely have been far better. Especially when it means no tea when the job is done.

“Good going to both you and Hazel,” they added.

@marjorie_wardle added: “You’re an amazing woman Amanda..you may have been stressed out but you certainly didn’t show it..there was a job to do & you just got on with it.”

Our Yorkshire Farm is available to watch on My5.