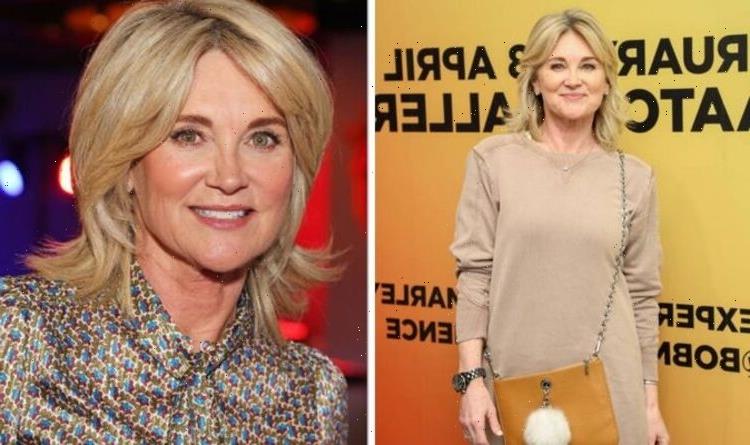 Anthea Turner, 61, spoke out about a moment in which she nearly went blind during an accident. The TV presenter said she was told that she was only moments away from losing sight forever due to damage done to her left retina.

The star explained that the incident which first caused her damage occurred when she was staying in an old hotel.

Anthea said that she pulled up some big blinds covering the windows, when she was hit with a shock.

She stated that while flipping up the blinds, a small toggle whipped her left eye as she let go of the cord too quickly.

The presenter said that there was pain and aching in her eyeball.

She said, speaking to The Mirror today: “I was away filming a TV show and staying in an old hotel where great big blinds covered enormous bedroom windows.

“On each pull cord was a plastic ping pong ball-shaped toggle and one morning, as I pulled up the blind, I let go of the cord too quickly.

“As the blind ricocheted up, the toggle hit me square in my left eye.

“I recoiled in pain for a moment. Instantly, there was a dull ache in my eyeball and because I was filming that day, my first thought was to check for visible damage to my face.

“My eyeball was aching, so when I looked in the mirror I was expecting to see it was bloodshot, or some redness but my eye looked totally fine.”

Anthea was settled for some time, not thinking much of the incident and not noticing any visible soreness in her eye.

However, she said the worry started when she saw red, flashing strobe lights, but nevertheless carried on with her day.

While driving home later, the star started seeing “red drops floating in her eye”, then decided the following day to get it checked.

While at OCL vision in London, it was revealed that Anthea had sustained a tear to her left retina.

She said: “I suddenly saw red, flashing strobe lighting in my left eye and it worried me, but when I checked in the mirror again I still couldn’t see any sign of damage.

“But later that evening, as I was being driven home, I began to see what looked like tiny little red drops floating in front of my eye.

“I started panicking that I’d botched the operation, that the impact of the toggle might have damaged the laser eye surgery,” she added.

This isn’t the first injury that Anthea has sustained.

Back in November, the host twisted her foot on a drop curb while shouting for a taxi to stop.

She told Express.co.uk at the time: “I’ve broken my fifth metatarsal and I just slipped off the pavement.

“I was getting a taxi, I hailed a cab, I had bags.

“I had just bought myself the most beautiful pair of black court shoes from Fenwick in Bond Street and I was getting into this cab and I just slipped.”

She concluded: “It was a drop pavement and I just went!”