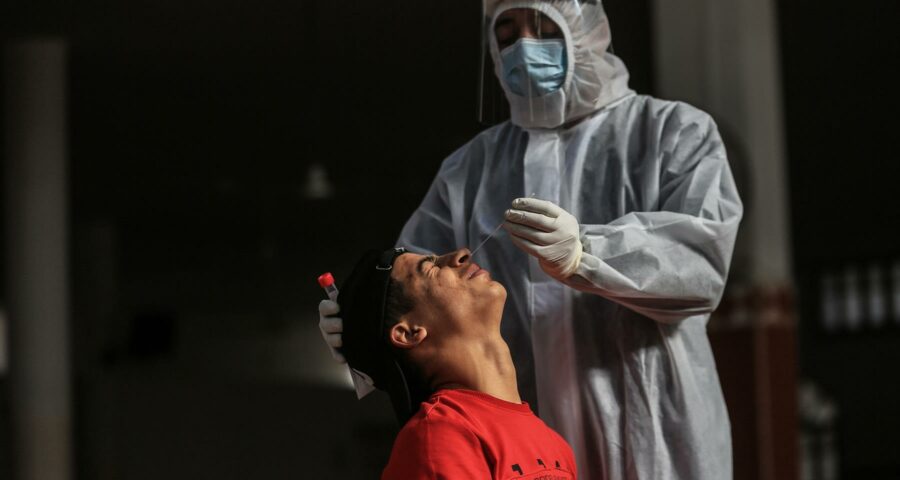 Omicron is blasting through New York. And while the Covid-19 variant appears to be less harmful than other strains — particularly in vaccinated people — its highly transmissible nature has resulted in a record-breaking amount of new cases across the metropolis. Citizens are clamoring to get tested around the holidays, and some have stumbled upon BeeperMD, which claims to send healthcare professionals on house calls. One problem: They don’t always deliver.

Last Friday, a TikTok influencer with more than 325,000 followers, named Paris Campbell, posted about her own experience with the company. Campbell starts her video by addressing “everyone in New York City who’s getting Covid, or thinks they have Covid, or is worried about Covid.” She seems to believe she’s discovered a great life hack for people who don’t want to wait in those “really long lines.”

Not So Down With Disease: Phish Postpone New Year's Concerts Over Omicron Concerns

The Private Lives of Liza Minnelli (The Rainbow Ends Here)

The United States of Weed

Campbell says her free appointment went as planned back in late November. It supposedly took mere minutes for her to learn that she was infected. (According to the BeeperMD website, the company offers five-minute antigen tests for free. They also do free PCR tests for people willing to wait 24-36 hours for results. If you only have six to 12 hours, PCR tests cost $149. For a 30-minute PCR turnaround, it’s $399. And there’s a $35 fee for same-day appointments.) Many viewers were inspired by her story and promptly made appointments, according to comments, but a swarm then followed up with some serious complaints.

“This is fake,” wrote one TikTok user. “I booked my test and no one came,” said another. “I filled that form for nothing and now they have my details.” Yet another lamented: “I booked this and no one came and now they have my personal information.” Others pointed out that they actually paid for same-day appointments that never happened. It’s an “insurance scam,” two more people theorized in the comments.

The comments kept coming, so Campbell made another video both apologizing to the people who felt misled and still insisting that the company is legitimate. “They are not a scam,” Campbell tells Rolling Stone over email. “I believe the issues people are having now are likely a result of the same surge we’re seeing with all testing around the city.” She thinks they’re “just overwhelmed.” While that’s certainly possible, it’s still problematic. (BeeperMD has not responded to Rolling Stone‘s requests for comment.)

Health care fraud related to Covid-19 has become a very real problem in 2021. Back in May, the Department of Justice announced that 14 defendants across the United States had been criminally charged for participating in schemes that had collectively generated $143 million, which was “allegedly laundered through shell corporations and used to purchase exotic automobiles and luxury real estate,” according to a press release. In one example, “multiple defendants offered Covid-19 tests to Medicare beneficiaries at senior living facilities, drive-through Covid-19 testing sites, and medical offices to induce the beneficiaries to provide their personal identifying information and a saliva or blood sample,” the statement says. These people then, allegedly, “misused the information and samples to submit claims to Medicare for unrelated, medically unnecessary, and far more expensive laboratory tests, including cancer genetic testing, allergy testing, and respiratory pathogen panel tests.”

In some of these cases, test results were not provided or delivered in an appropriate amount of time, and, as the DOJ points out, the defendants were “risking the further spread of the disease.”

After seeing Campbell’s first video, Lindsay Plesent booked an appointment for Saturday. She soon received confirmation texts. When no one showed up, she says she called their customer service line, which led only to a voicemail recording. “I left a message with my info and phone number but no one ever returned the call,” Plesent tells Rolling Stone. “I instead ended up spending $100 to get tested at a small pharmacy near me because I needed a negative test to be able to work.”

While Plesent tried the free option, a woman named Irene, who asked that her last name be kept private, paid the $35 for same-day services. When she called — forty five minutes past the end of her scheduled window — she says she was rerouted multiple times before entering a queue of about 40 people. “I did eventually get in touch with a human who informed me that no one had been assigned to me, and that, for same-day appointments, you’re supposed to call,” she tells Rolling Stone, adding that their website doesn’t specify that. “She put me on hold and then hung up.” Irene tried again, waited again, “begged,” and had another rep tell her the same thing.

This time, though, she says the person on the phone offered her a refund that would post in seven to 10 days. Irene is still waiting for that. “The rep said their system was basically accepting appointments that they couldn’t actually fulfill,” she says. Frustrated she took to Twitter, tagging the company and writing that the whole mess was “kind of terrible.”

Michael Braun saw Irene’s tweet and replied with sympathy. While his BeeperMD appointment actually happened, the tester seemed flustered and confused: “He wasn’t really trained, basically just brought us a rapid test, and took a picture of the result after about three to five minutes — well before the 15 that you’re supposed to wait,” Braun tells Rolling Stone. Braun also didn’t end up receiving the results for his PCR test, which were supposed to arrive within a 24-to-36-hour window that ended on Dec. 18. “Entirely symptomatic and need to know by tomorrow a.m.,” he commented on her thread at the time. “I could’ve gone somewhere else! I’m kinda devastated.” He still hasn’t seen his results.

On the same day that Braun’s appointment took place, his friend’s got cancelled. “She didn’t say she was symptomatic, and I was,” he says, figuring that maybe he was a priority. But Rolling Stone talked to four others who were symptomatic and confirmed for appointments, and have been left in the dark.

Gail Benenson’s daughter wasn’t feeling well when she paid for her no-show appointment, went somewhere else, tested positive, and has not yet been refunded. “They never responded after the initial signup,” Benenson says. “I think it’s either a scam or a startup that got overwhelmed.” A Brooklynite named Mallory — who says she had active Covid with symptoms when she booked an appointment to see if she was still contagious — thinks she fell for a “scam.” Her assessment is based largely on their Instagram comments being off and the hotline going to a waitlist and then voicemail.

According to Instagram, where BeeperMD has a bit more than one thousand followers, the company is based in South Florida. They didn’t post anything for four days following the TikTok video’s release — when complaints spiked — and there have been no social media announcements regarding delays or in-house problems of any kind. The same can be said for their Twitter page, which has less than 20 followers.

“The #Omicron surge is creating chaotic demand for #COVID19 tests,” BeeperMD tweeted on Tuesday, Dec. 21, linking to a SunSentinel article that called BeeperMD “fast” and “accurate.” “But don’t worry, when it comes to testing, there are options.” While BeeperMD apparently told the SunSentinel that it is “inundated and overwhelmed,” that information is not clear to a passive visitor of BeeperMD’s website and official pages. “Spokesman Eddie Mady says the company is staffing up and training as quickly as possible to meet demand,” the outlet reported. “‘We just hired another 80 people on Friday,’ he said.”

The next day, BeeperMD posted again, encouraging people to count on them for their holiday travel plans. “We’ve got you covered,” they wrote. “All you need to do is book the appointment and we do the rest.”

But Rolling Stone spoke with a holiday-time traveler that used BeeperMD, Ronan Counihan, who says he paid $188 for two rapid same-day antigen tests within a specific timeframe so that he could make a flight. He says he “called and called,” and was disconnected multiple times. When he got through, “the person on the phone told me directly that ‘nobody is coming today… your test will not be happening.’” Counihan says he did end up making his flight, but only after waiting in line outside of a clinic in 38-degree weather for three hours. “I had 25 minutes to spare from getting the results to leaving for the airport,” he says. “So much stress and anxiety.”

Counihan, who works in the service industry himself, says the situation was made worse by the rep’s “lack of care.” She apparently never apologized on behalf of BeeperMD. “She asked me if I would like a refund… as if I was going to say ‘no keep the money,’” he says. “I understand the nature of people who complain and how annoying it is. I’m sure they’re doing great work and are currently overwhelmed with the latest surge — but that shouldn’t come at the cost of missing flights, money taken, and just a huge waste of time.”