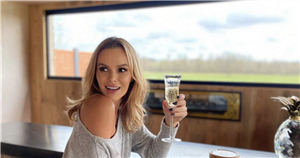 Amanda Holden looked to be having the time of her life as she sipped on some bubbly in the space of her lavishly transformed new garden shed.

The 51 year old was pictured holding up a glass whilst sitting beside a newly installed bar built with a marble top inside her impressive new outside digs, in a photo posted to her Instagram.

Amanda appeared relaxed in the snap as she wore a grey off-the-shoulder jumper with matching loose-fitting trousers and sported pretty make-up as her blonde hair was styled in loose flicks.

The radio host’s shed was presented in the picture lined with wooden panelling and looked very roomy as a giant horizontal window could be seen in the background of the photo revealing a vast view of the garden space behind the luxury construction.

“Thank you @intothegardenroom for making bubbles and snuggles in the back garden even better,” Amanda captioned.

“Perfect for a sneaky afternoon disco nap too! #BoughtAndPaidFor #SupportingLocalBusiness.”

A second snap shared by the Heart Radio star showed her shed from the outside perspective, as the building was seen set upon a wooden deck with more panelling displayed along the walls and roof and external lamps attached with plants placed alongside.

The front of the garden shed could be seen installed with floor-to-celling windows with black framing, giving another glimpse of the marble bar set up inside of the new space created for some downtime Amanda could enjoy just steps away from her home.

Amanda's shed reveal comes as she starred in Neighbours this week appearing as the aunt of character Harlow, who visits London seeking more information about her late mum Prue.

“They sent over a few lines and the premise of the plot, and the fact that she was this well put together, glamorous lady – that's always going to get me! They explained that there was going to be a bit of a twist and she isn't all she seems to be.”

The London episodes have aired just a couple of months before the Australian soap ends its 37-year TV run in June.

Speaking on her return to acting, Amanda promised that she has “lots of things in the pipeline this year” which she said was excited to embark on.