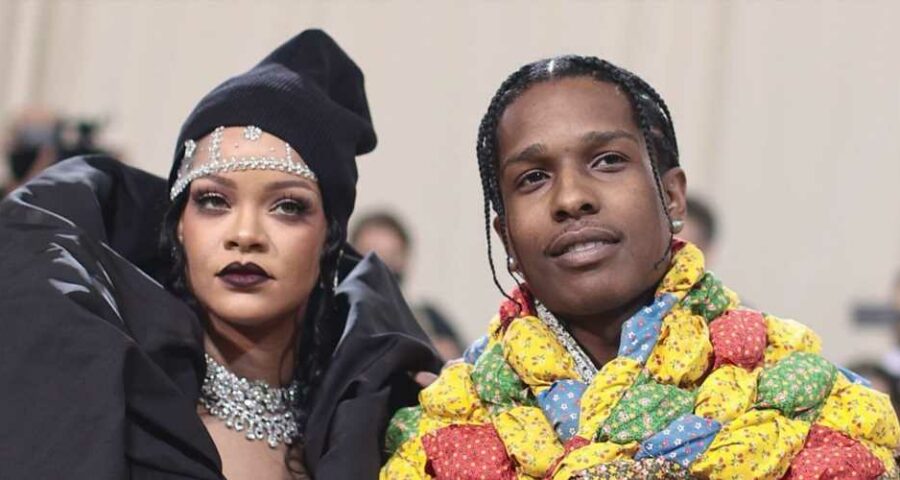 We'll spare you the obvious "love in a hopeless place" reference, because as long as there's Rihanna, there's hope. The multi-hyphenate superstar isn't quiet about much, with everything from her entrepreneurial pursuits and her oft-delayed upcoming album making headlines, but there is one thing she's managed to keep on the down-low: her love life. Though rumors never stop swirling around her highness Ri, she's always brushed off any mentions of her love life, until she took the narrative into her own hands and let the world know that she and her rapper beau A$AP Rocky were the real deal.

And while it feels like the two are still a new couple, they've actually known each other for over a decade — which might be why it feels like they've been with us forever. Here's everything that you need to know about the dynamic duo, from their first performance together to that showstopping Met Gala appearance, couture beanie and all. The next year, the two performed the song at the 2012 MTV Video Music Awards.

The relationship still seems to be strictly professional. She enlists Rocky to be her opening act on the North American leg of her Diamonds World Tour.

Things are quiet between the two for several years and while fans are hoping for some sort of romantic connection, the two keep those rumors at bay thanks to respective relationships. By 2017, Rihanna is linked to billionaire Hassan Jameel and Rocky is dating Kendall Jenner.

The two attend a Louis Vuitton fashion show during Paris Fashion Week and are seated together. A few months later, Rihanna invites Rocky to her annual Diamond Ball, which supports the Clara Lionel Foundation and raises money for education around the world. Rocky also attends the 2019 event. The British Fashion Awards mark the duo's first red carpet together, though it's as friends, not a couple. They both wore Fenty for the occasion.

After three years together, Rihanna and Jameel break up. Almost immediately, rumors of a relationship with A$AP start to make headlines.

"They shared a hotel suite during that trip in New York," a source told The Sun. "However, Rihanna is reluctant to put a label on it as it's so soon after Hassan. They're really enjoying each other's company and taking things easy as it's still early days."

Stories don't line up, however, because other sources claim that Ri is single (and loving it).

"Rihanna is single," another source told E! News. "She just got out of a long intense relationship with Hassan. She wants to be single and isn't going to jump into something. She's hanging out with ASAP Rocky, but she is not dating him."

Rihanna and Rocky work together again, only this time, it's for Fenty Skin.

The two film a video for GQ, where they talk about skincare and are generally just very cute.

"Men love their skin, and they take care of it, but they feel obligated almost to only use products that are for men because anything beyond that feels too feminine, it's not for them, they're not allowed, they don't have permission," Rihanna says in the clip.

"I had to discover face cleansing and skincare all at the same time when I was a young buck in the shower," Rocky added. "You can't wash your body with the same rag you wash your face with. I was lucky enough to be the type of guy that wants to wash my face."

The two are reportedly "inseparable," according to new sources.

"They've been inseparable the past few weeks," the insider told People. "It's a new relationship, but they both seem very into it. They've always seemed to have a great time together. They have a lot in common. … They both are very much about helping out in the communities where they grew up. A$AP is generous, and so is Rihanna. A$AP is known for being a great guy."

Neither party has officially confirmed the relationship, though it's pretty clear that they're the real deal when he spends the holidays with her family in Barbados. The two even took a romantic cruise on Christmas Eve, People adds.

"They've known each other for so long as friends and in a work setting, which makes it so easy for them to get along, travel together and be involved in each other's lives to the full extent," a source told Entertainment Tonight. "They always have such a good time together and definitely seem in love."

The couple is spotted out in Los Angeles together.

"Things changed over the summer and they finally hooked up. They've been together ever since," a source told Us Weekly when photos of them wearing matching leather outfits hit the internet.

Rocky officially declares his love for Ri in a GQ profile.

In the story, he calls her "my lady" and "the love of my life." He also told the publication that they both embarked on a "Great American Road Trip," which helped them really get to know each other.

"I met myself," he said of the trip. "Being able to drive and do a tour without feeling like it was an occupation or an obligated job agreement, I feel like that experience is like none other. I never experienced nothing like it."

When asked if Rihanna is "The One," Rocky went all-out, saying that she was much, much more: "So much better when you got the One. She amounts to probably, like, a million of the other ones. I think when you know, you know. She's the One."

Sources confirm that the two are serious.

"They are crazy about each other," a source close to the couple told People, adding that the two are both in it "for the long term."

"This romance evolved since they were friends first. They already knew and respected each other and it has just grown from there." An additional source added that the two had "[built] a great foundation" for their relationship thanks to their existing friendship.

"They loved to laugh and have a blast together before they even dated," the source noted. "All of that makes for a solid romance now."

The two hit the Met Gala red carpet together.