The following story contains spoilers for Mare of Easttown through Episode 6.

As we gear up for the thrilling conclusion of HBO’s murder mystery limited series Mare of Easttown, which will conclude with its upcoming Episode 7, everyone’s eager to find the answers to some of the mysteries which have not only befuddled Mare Sheehan (Kate Winslet) for the duration of the series, but the loyal viewers following along. Who killed Erin McMenamin? Who is the father of Erin’s baby? What is Dylan’s deal? Is Guy Pearce really just playing a nice writing professor?

But just when it seemed like we were starting to hone in and get down to brass tacks on solving some of those mysteries, Mare‘s Episode 6 gave us one last mystery. Just as Mare was told by her friend, Laurie Ross, that Laurie’s brother-in-law, Billy, had confessed to Erin’s murder, some clever cross-cutting showed that there was more to the story. The photo that Erin’s friend Jess had saved from the fire showed something big—so big, in fact, that Chief Carter needed to get Mare on the phone as soon as possible. 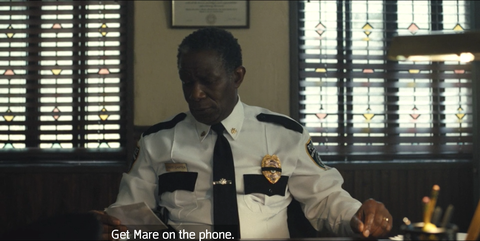 So, uh, what the hell was in the photo? It’s the question clearly on the minds of every Mare of Easttown head, and it only figures that it’s setting up something huge. And that figures to make sense—we’ve only barely gotten over losing our dear sweet Zabel, and Mare sets up a revelation in this photo that could potentially change the game.

If you’re interested in diving in super deep, there are theories aplenty—and probably some X-Ray vision analysis of the photo itself—over on the Mare of Easttown Subreddit. No X-Ray vision here—for our purposes, we’re just going to look at the evidence explicitly presented throughout the course of the show’s six episodes to this point, right up to the last few moments of the penultimate episode. AKA: the stuff the creators of the series want us to have right now. So, let’s talk about the possibilities of who—or what—could be in that photo.

This feels like the most clear, and obvious direction things are going. In Episode 6, John got his brother, Billy, to “confess” to Erin’s murder, and say aloud that he did it. But we only saw a part of that conversation; it sure seemed like he was coaching his brother—who may be either a blackout drunk or have mental illness—to reach that conclusion.

And when Billy got his morals about his perceived revelation and wanted to confess his crime to his authorities, John had a quick about face, quickly suggesting a fishing trip. As Billy discovered with John’s pistol hidden in his bait box, this fishing trip is actually planned to be a John-killing-Billy trip, probably to make it look like a suicide and, he hopes, to close the book on Erin’s murder. The only question now is if John—who we know has historically been unfaithful to his wife, Laurie—is the father of Erin and her killer (he could possibly be one or the other and not both), or if he’s helping cover for someone else.

Which brings to our next one. Maybe John isn’t the killer, but it’s someone he’s covering for. Who would he be more inclined to cover for than his son? There have been hints that Ryan has more than meets the eye, and this would make for an interesting conclusion to that arc, which hopefully would get filled in with more explanatory exposition in the final episode.

We also know that Ryan has known John’s “secret” for some time. Maybe that’s just general infidelities, but it’s also possible that he saw his father with Erin as far back as that family reunion, and has been troubled by it and silenced by his father ever since.

So we already know from the paternity test earlier in the season that Frank is definitively not the father of Erin’s baby. But we don’t know for sure that he doesn’t know more about the baby than he’s letting on, and this could potentially put him right in that picture. Which leads to our next possibility…

Chief Carter looked shocked when he saw that photo. He needed Mare on the phone pronto. And what would be more shocking than the son of Erin’s baby turning out to be Mare’s second grandchild, by way of a second—hidden—child from Kevin? This would make the whole Frank helping Erin out angle make more sense, if he in fact knew it was a secret child of Kevin’s.

Feels pretty definitive that while Billy—probably in a blackout drunk state—helped clean up some aftermath of Erin’s murder. But it also seems pretty definitive that he’s not the killer, and that John talked him into admitting that as a patsy. Hopefully Mare and others can help him get out of his current jam before its too late.

OK, full transparency—I have no idea what Dylan’s role is in all of this. Clearly it’s something; he and Jess didn’t burn those journals for no reason, and he didn’t threaten her after the fact for no reason either. If it’s any of the above people in the photos, why is he helping them cover? It’s not clear at all just yet, but the finale of the show should help us get there. But in the meantime we need to include him among the suspects because, well, he’s incredibly sketchy.

There is very little reason to believe that Richard, Mare’s love interest and by all means a nice man, is involved in any of the crimes at the show’s center. But he’s played by Guy Pearce, a big actor, who has so far just been…a nice guy who goes on dates with Mare. That would be fine! But there’s also a (very, very small) possibility that the show is saving one of its biggest names for an outrageous final surprise.