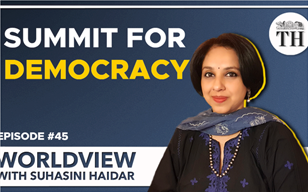 This week on Worldview: US President Biden Summit for Democracy — can global conferences promote democratic standards or is this a case of foreign policy overreach?

Over a two-day set of discussions, the U.S. hosted hundreds of world leaders, civil society representatives and rights activists at a virtual Summit for Democracy. Prime Minister Narendra Modi represented India, among 112 countries invited, where he gave a national statement on democracy. However, amidst a stream of criticism against the summit, many asked the question- should democracy, elections, human rights, media freedom be part of a foreign policy exercise.

What the organisers felt they had achieved:

1. The Summit for Democracy was part of a campaign promise made by U.S. President Joseph Biden during his election campaign in 2020, and was as much a reaction to American domestic politics, where former President Donald Trump was seen as destroying principles of U.S. democracy by questioning the elections, defunding American programmes, ignoring human rights in countries he strengthened ties with, and cutting access to free media operations. In his speech, Mr. Biden referred to “retreating democracies” globally- pointing to the rise in populist authoritarian leaders who come to power via elections. The move then, was as much about geopolitics as it was about domestic American politics.

2. By dividing the world into 100 plus democracies and the others, the U.S. is also aiming to draw a line between itself and allies against its two biggest rivals China and Russia, which do not qualify. As the summit goes forward, they hope to make democratic fence-sitter countries to pick a side as well.

3. By making each of the leaders that spoke to give commitments to democracy on the three key themes: Defending against authoritarianism, Addressing and fighting corruption, Advancing respect for human rights, the U.S. hopes to compile a list of commitments, somewhat like the UN CoP26 summit, where nationally determined contributions on climate change were announced, and hold countries accountable to them.

4. In its “Next Steps” the U.S. government says it hopes that after consultation, coordination, action, and delivery of results, the U.S. President will host an in-person Summit approximately one year later. During the second Summit it will take stock of the progress made and forge a common path ahead.

6. The Summit for Democracy plan ties in with the Biden administration’s plans to enforce democratic values in other countries- like human rights. The summit coincided with International Human Rights day, when the U.S. state department announced sanctions against  officials in Uganda, China, Belarus, Bangladesh, Sri Lanka, Mexico, Myanmar and North Korea for “violations of human rights," using various domestic laws including the Global Magnitsky Act.

Why was it criticised?

1. Clearly those who were not invited had a number of reasons to criticise the event. The Russian and Chinese envoys to the U.S. wrote a joint op-ed in the national interest website.

Asking how the U.S. could arrogate to itself the right to decide who is a democracy and who is not, and accusing Washington of seeking to divide the world with a new cold war mentality.

2. Even Pakistan, which was invited but declined the invitation said that it would discuss issues of democracy in its bilateral dialogue with the U.S. at a future date…of course many pointed to Pakistan’s China ties as the reason for Imran Khan’s refusal.

3. Then there were those who should have been there, but were not. According to the invitee list released- 39 countries in Europe and 27 in North and South America were called, but only about 17 from Africa and 25 from all of Asia- which included just 4 from the entire South and Central Asian region. In India’s neighbourhood, India Pakistan Nepal and Maldives were invited, but democracies like Bhutan, Bangladesh and Sri Lanka were not.

When asked about the exclusions, here is what a senior U.S. official said.

4. The U.S. government’s announcement of sanctions against officials in Bangladesh and Sri Lanka also made it appear that the invitee list was political. The timing of the announcement seemed particularly strange as Bangladesh was just beginning its celebrations of 50 years of liberation, and festivities that included President Kovind in Dhaka. India did not issue any statement questioning the U.S. sanctions, which is significant.

5. The U.S. move to speak of democracy globally is timely, but it also raises the question- in a year that has seen the fall of democracy in two of the newest entrants to the club- Afghanistan and Myanmar, can such summits really make any difference? In the case of Afghanistan, the U.S. practically triggered the crisis with its troops pullout, and no amount sanctions and statements since February have deterred Myanmar’s Tatmadaw from its actions of overturning the Suu Kyi government and imprisoning all. As almost an open challenge- Myanmar announced prison sentences for Suu Kyi in the same week.

6. Isn’t the United Nations the correct forum for the exercise? If the idea is to grade democracies and set baselines for what constitutes a good democracy, the event may have found more takers if it was UN-sponsored. The UN already has the Universal declaration of Human Rights, that every country signs on to, and the UNSC has the mandate to enforce these. In fact, the U.S. has been criticised for unilateral attacks on countries rather than for UN-mandated interventions for precisely this reason.

7. Finally the basic premise, that democracies have better relations with each other than with other forms of rule is really not scientifically borne out by anything- Relations with Gulf monarchies are a case in point.

The truth is, the grading of values is always relative- do elections make a democracy, or is it representation, rights, freedoms that do? It could be argued that the real threat to democracy is not the countries that choose other systems- Monarchies, Military rule and dictatorships, but countries that hold elections, but are in fact majoritarian, hypernationalist republics, where the rights of minorities and women, press freedoms, space for NGOs and criticism of the government are all trampled upon. Finally, can these ills be removed by external interventions, or is democracy the only healer, with the hope that the will of the people will vote for a more just country?

Clearly, more questions than answers came from the U.S. summit, and we will track the next steps for you.

Here are some books I recommend:

1. The Retreat of Western Liberalism by Edward Luce

2. Twilight of Democracy: The Seductive Lure of Authoritarianism by Anne Applebaum

3. Unthinkable: Trauma, Truth, and the Trials of American Democracy by Congressman Jamie Raskin

4. How to Be a Dictator: The Cult of Personality in the Twentieth Century by Frank Dikotter

5. What Is Populism? by Jan-Werner Muller

6. Healing Broken Democracies: All You Need to Know About Populism by Mark Brolin

7. Global Discontents: Conversations on the Rising Threats to Democracy by Noam Chomsky

There are also the Freedom House Reports and International Institute of Democracy and Electoral Assistance that the U.S. President refers to in his speech.