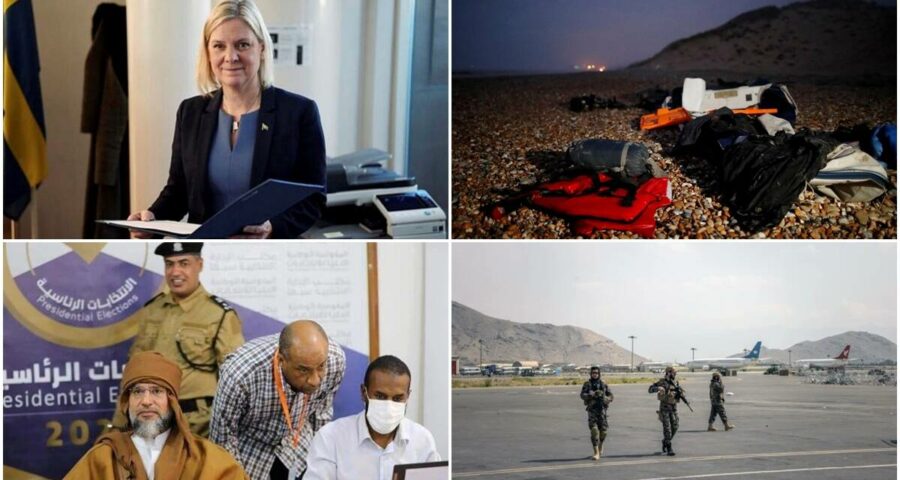 Good morning! Begin your day with five key overnight stories from around the world. Here is a round-up of the top developments around the world today.

British and French officials traded blame on Wednesday after 27 migrants died when their dinghy deflated as they made a perilous crossing of the English Channel.

The accident was the worst disaster on record involving migrants in the narrow seaway separating the two countries. France had earlier stated 31 people lost their lives, but the number was later revised down to 27, government officials said.

But Andersson said she had told the speaker of parliament she hoped to be appointed prime minister again as the head of a single-party government, and the prospects of that happening appeared fairly strong given support from other parties.The Green Party quit after parliament rejected the coalition’s budget bill.

Three men were convicted of murder Wednesday in the killing of Ahmaud Arbery, the Black man who was running empty-handed through a Georgia subdivision when the white strangers chased him, trapped him on a quiet street and blasted him with a shotgun.

The February 2020 slaying drew limited attention at first. But when video of the shooting leaked online, Arbery’s death quickly became another example in the nation’s reckoning of racial injustice in the way Black people are treated in their everyday lives.

Libya’s election commission said on Wednesday that Saif al-Islam Gaddafi, the son of the former ruler and a major candidate in December’s planned presidential election, was ineligible to run, compounding the turmoil surrounding the vote. Gaddafi was one of 25 candidates that it disqualified in an initial decision pending an appeals process that will ultimately be decided by the judiciary.

The United Arab Emirates has held talks with the Taliban to run Kabul airport, going up against Gulf rival Qatar in a diplomatic tussle for influence with Afghanistan’s new rulers, according to four sources with knowledge of the matter. UAE officials have held a series of discussions with the group in recent weeks to discuss operating the airport that serves as landlocked Afghanistan’s main air link to the world, the foreign diplomats based in the Gulf region told Reuters. The talks demonstrate how countries are seeking to assert their influence in Taliban-ruled Afghanistan even as the hardline Islamist group largely remains an international pariah and its government not formally recognised by any country.