Wealthy nations in Europe and North America have secured the bulk of limited stocks of vaccines, positioning themselves for starkly improved economic fortunes. Developing countries — home to most of humanity — are left to secure their own doses. The end of the pandemic is finally in view. So is rescue from the most traumatic global economic catastrophe since the Great Depression. As COVID vaccines enter the bloodstream, recovery has become reality.

But the benefits will be far from equally apportioned. Wealthy nations in Europe and North America have secured the bulk of limited stocks of vaccines, positioning themselves for starkly improved economic fortunes. Developing countries — home to most of humanity — are left to secure their own doses.

The lopsided distribution of vaccines appears certain to worsen a defining economic reality: The world that emerges from this terrifying chapter in history will be more unequal than ever. Poor countries will continue to be ravaged by the pandemic, forcing them to expend meager resources that are already stretched by growing debts to lenders in the United States, Europe and China.

The global economy has long been cleaved by profound disparities in wealth, education and access to vital elements like clean water, electricity and the internet. The pandemic has trained its death and destruction of livelihood on ethnic minorities, women and lower-income households. The ending is likely to add another division that could shape economic life for years, separating countries with access to vaccines from those without.

“It’s clear that developing countries, and especially poorer developing countries, are going to be excluded for some time,” said Richard Kozul-Wright, director of the division of globalization and development strategies at the United Nations Conference on Trade and Development in Geneva. “Despite the understanding that vaccines need to be seen as a global good, the provision remains largely under control of large pharmaceutical companies in the advanced economies.” 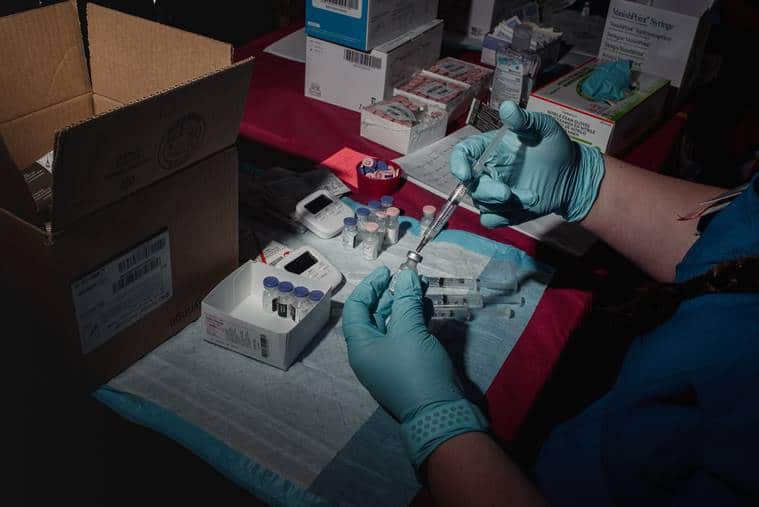 International aid organizations, philanthropists and wealthy nations have coalesced around a promise to ensure that all countries gain the tools needed to fight the pandemic, like protective gear for medical teams as well as tests, therapeutics and vaccines. But they have failed to back their assurances with enough money.

The leading initiative, the Act-Accelerator Partnership — an undertaking of the World Health Organization and the Bill and Melinda Gates Foundation, among others — has secured less than $5 billion of a targeted $38 billion.

A group of developing countries led by India and South Africa sought to increase the supply of vaccines by manufacturing their own, ideally in partnership with the pharmaceutical companies that have produced the leading versions. In a bid to secure leverage, the group has proposed that the World Trade Organization waive traditional protections on intellectual property, allowing poor countries to make affordable versions of the vaccines.

The WTO operates on consensus. The proposal has been blocked by the United States, Britain and the European Union, where pharmaceutical companies wield political influence. The industry argues that patent protections and the profits they derive are a requirement for the innovation that yields lifesaving medicines.

Proponents of suspending patents note that many blockbuster drugs are brought to market via government-financed research, arguing that this creates an imperative to place social good at the heart of policy.

“The question is really, ‘Is this a time to profit?’” said Mustaqeem De Gama, councilor at the South African mission to the WTO in Geneva. “We have seen governments closing down economies, limiting freedoms — yet intellectual property is seen to be so sacrosanct that this cannot be touched.”

In the wealthy nations that have secured access to vaccines, relief from the economic disaster brought on by the public health emergency is underway. The restrictions that have shut down businesses could be lifted, bringing meaningful economic benefits as soon as March or April.

For the moment, the picture is bleak. The United States, the world’s largest economy, has suffered death tolls equivalent to a 9/11 every day, making a return to normalcy appear distant. Major economies like Britain, France and Germany are under fresh lockdowns as the virus maintains momentum.

But after contracting 4.2% this year, the global economy appears set to expand by 5.2% next year, according to Oxford Economics. That forecast assumes annual growth of 4.2% in the United States and a 7.8% expansion in China, the world’s second-largest economy, where government action has controlled the virus.

Europe will remain a laggard, given the prevalence of the virus, according to IHS Markit, with the continent’s economy not returning to its precrisis size for two years. But a deal struck between Britain and the European Union on Thursday, preserving much of their trading relationship after Brexit, has eased the worst fears about a slowdown in regional commerce.

But by 2025, the long-term economic damage from the pandemic will be twice as severe in so-called emerging markets compared with wealthy countries, according to Oxford Economics.

Such forecasts are notoriously inexact. A year ago, no one was predicting a calamitous pandemic. The variables now confronting the global economy are especially enormous.

The production of vaccines is fraught with challenges that could limit supply, while their endurance and effectiveness are not fully understood. The economic recovery will be shaped by questions of psychology. Following the most profound shock in memory, how will societies exercise their freedom to move about once the virus is tamed? Will people liberated from lockdowns pack together in movie theaters and on airplanes?

Any lingering disinclination toward human congregation is likely to limit growth in the leisure and hospitality industries, which are major employers.

The pandemic has accelerated the advance of e-commerce, leaving traditional brick-and-mortar retailers in an especially weakened state. If an enduring sense of anxiety prompts shoppers to avoid malls, that could limit job growth. Online retailers like Amazon have aggressively embraced automation, meaning that an increase in business does not necessarily translate into quality jobs.

Many economists assume that as the vaccines ease fear, people will surge toward experiences that have been off-limits, thronging restaurants, sporting events and holiday destinations. Households have saved up as they have canceled vacations and entertained themselves at home.

“If people’s spirits are eased, and some of the restrictions are lifted, you could see a spending splurge,” said Ben May, a global economist at Oxford Economics in London. “A lot of this will be about the speed and degree to which people go back to more normal behaviors. That’s very hard to know.”

But many developing countries will find themselves effectively inhabiting a different planet.

The United States has secured claims on as many as 1.5 billion doses of vaccine, while the European Union has locked up nearly 2 billion doses — enough to vaccinate all of their citizens and then some. Many poor countries could be left waiting until 2024 to fully vaccinate their populations.

High debt burdens limit the ability of many poor countries to pay for vaccines. Private creditors have declined to take part in a debt suspension initiative championed by the Group of 20.

Promised aid from the World Bank and the International Monetary Fund has proved disappointing. At the IMF, the Trump administration has opposed an expansion of so-called special drawing rights — the basic currency of the institution — depriving poor countries of additional resources.

“The international response to the pandemic has essentially been pitiful,” said Kozul-Wright at the U.N. trade body. “We are worried that as we move into the distribution of the vaccines, we are going to see the same again.”

One element of the Act-Accelerator partnership known as Covax is meant to allow poor countries to buy vaccines at affordable prices, but it collides with the reality that production is both limited and controlled by profit-minded companies that are answerable to shareholders.

“Most people in the world live in countries where they rely on Covax for access to vaccines,” said Mark Eccleston-Turner, an expert on international law and infectious diseases at Keele University in England. “That is an extraordinary market failure. Access to vaccines is not based on need. It’s based on the ability to pay, and Covax doesn’t fix that problem.”

On Dec. 18, Covax leaders announced a deal with pharmaceutical companies aimed at providing low- and middle-income countries with nearly 2 billion doses of vaccines. The arrangement, which centers on vaccine candidates that have not yet gained approval, would provide enough doses to vaccinate one-fifth of the populations in 190 participating countries by the end of next year.

India is home to pharmaceutical manufacturers that are producing vaccines for multinational companies including AstraZeneca, but its population is unlikely to be fully vaccinated before 2024, according to TS Lombard, an investment research firm in London. Its economy is likely to remain vulnerable.

Even if masses of people in poor countries do not gain access to vaccines, their economies are likely to receive some spillover benefits from wealthier nations’ return to normal. In a world shaped by inequality, growth can coincide with inequity.

As consumer power resumes in North America, Europe and East Asia, that will drive demand for commodities, rejuvenating copper mines in Chile and Zambia and lifting exports of soybeans harvested in Brazil and Argentina. Tourists will eventually return to Thailand, Indonesia and Turkey.

But some argue that the ravages of the pandemic in poor countries, largely unchecked by vaccines, could limit economic fortunes globally. If the poorest countries do not gain vaccines, the global economy would surrender $153 billion a year in output, according to a recent study from the Rand Corp.

“You need to vaccinate health care workers globally so you can reopen global markets,” said Clare Wenham, a health policy expert at the London School of Economics. “If every country in the world can say, ‘We know all our vulnerable people are vaccinated,’ then we can return to the global capitalist trading system much quicker.”