Unlike protesters in Ukraine, who in 2014 waved European Union flags and cursed Putin as they toppled their own president, Belarusian demonstrators are not fighting to join Europe and reject Russia. 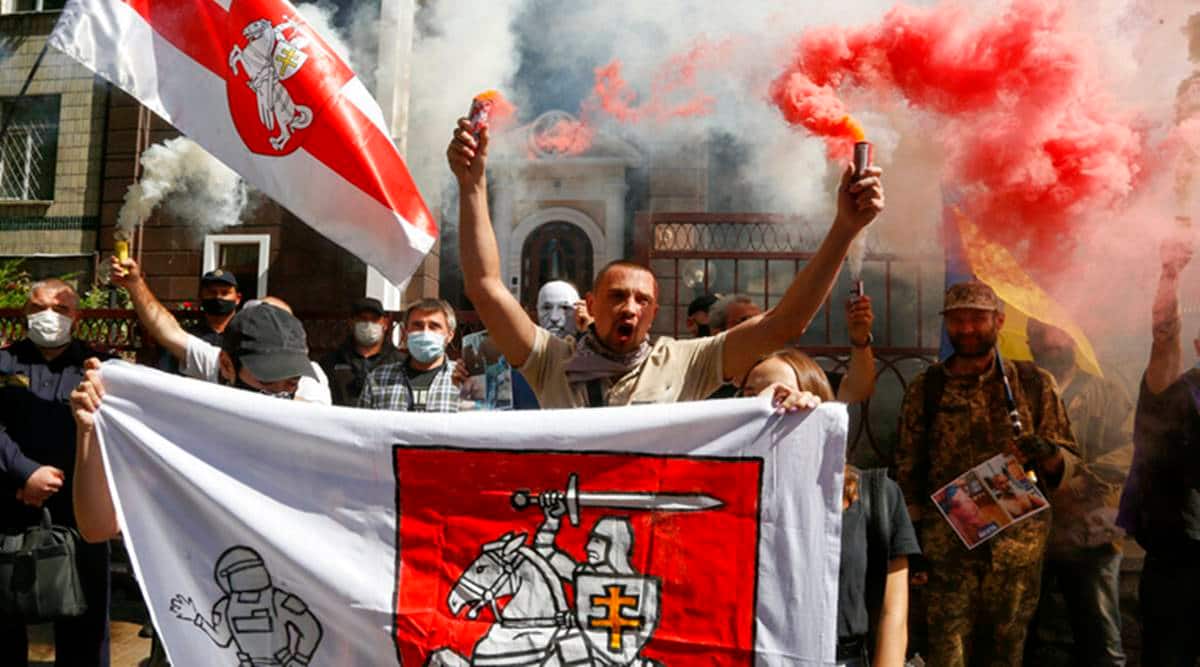 By Ivan Nechepurenko and Andrew Higgins

As protests against his rule have grown and intensified over the last week, the man known as “Europe’s last dictator” turned in desperation Monday to the once reliably loyal workers at a tractor factory. But instead of being showered with their support, he was shouted down with chants of “Go away! Go away!”

Until he claimed a landslide victory on Aug. 9 in a fraud-tainted election, few leaders appeared stronger and more secure than Lukashenko, a former state farm director who has ruled Belarus for 26 years, backed by an expansive, brutal and unwaveringly loyal security apparatus.

Now, in scenes recalling the popular uprising that came out of nowhere to topple Romania’s seemingly invincible dictator Nicolae Ceausescu in 1989, the Belarus capital of Minsk, long known for its cowed calm and order, has shed decades of fear and raised its voice with a simple, insistent demand: The dictator must go.

“At the moment, the only issue that matters to us is the president,” said Sergei Drilevsky, the leader of a strike committee at the Minsk Tractor Works. Calls for a new election, the release of protesters detained last week and other demands all flow from the need to address “the dictator’s attempts to stay in power,” he said. Former bastions of support for Lukashenko, like state-owned factories and state-controlled television stations, are now wavering, outraged by a frenzy of police violence last week directed against those protesting the blatantly rigged presidential election.

The security services have not yet broken ranks but have, at least for the moment, mostly retreated from the streets.

Flailing around in search of a savior, Lukashenko has turned for help to a fellow strongman, President Vladimir Putin of neighboring Russia. The two leaders spoke twice over the weekend by telephone.

But Putin, while anxious to avoid Belarus going the way of Ukraine and embracing the West, has so far shown little interest in throwing Lukashenko a lifeline. He did promise help if Belarus should be attacked by foreign armies. But that possibility is considered so unlikely that, despite claims by Lukashenko of NATO forces gathering on the border, Putin provided scant real comfort.

Lukashenko’s enemies are domestic, not NATO tanks and troops. In what looked like a sign of increasing desperation, Lukashenko said Monday, in remarks to a huddle of workers at the tractor factory, that a new election could be possible after the adoption of a new constitution. Just a few minutes earlier, in a speech at the factory, he had said the opposite: “We had elections. Until you kill me, there will not be any more elections.”

Unlike protesters in Ukraine, who in 2014 waved European Union flags and cursed Putin as they toppled their own president, Belarusian demonstrators are not fighting to join Europe and reject Russia. They are waving the red and white banner that Lukashenko scrapped as the national flag and that has become a symbol of opposition to him. 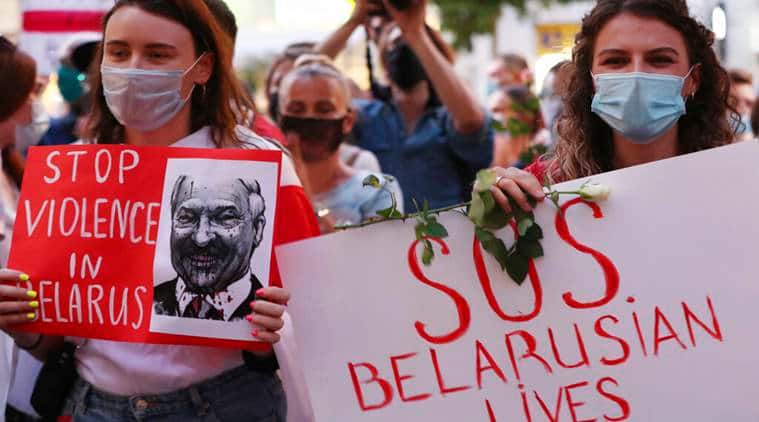 Nearly everyone in Belarus speaks Russian, not Belarusian, a related Slavic language that is rarely heard outside villages. While some Ukrainian nationalists sided with the Nazis during World War II, Belarusians resisted Hitler’s army with such ferocity that a quarter of the population died, making what was then the Byelorussian Soviet Socialist Republic the biggest Soviet victim of the war.

Putin, who last month engineered what was widely viewed as a rigged vote to prolong his rule until 2036, is no more open to free and fair elections than Lukashenko.

But Putin “would dump Lukashenko immediately if he was sure that people he thinks are friendly to Russia were ready to take over,” said Dmitry Trenin, the head of the Moscow Carnegie Center and an expert on Russian foreign affairs. A military intervention by Russia to save Lukashenko, he added, would “lead to an utter and complete disaster. Everyone understands that.”

But there is still anxiety in Europe that Putin could foment such a disaster.

“Putin will not let Belarus go,” said Ulrich Speck, an analyst with the German Marshall Fund in Berlin. “He went to war for Ukraine, and he’ll do the same for Belarus if necessary. I can’t see him accepting Belarus turning away and becoming a democracy and turning to the West. It’s too essential to his own rule at home.”

Like Russia, the European Union has been caught by surprise by events in Belarus and is unsure how to respond, mindful that its strong support for protesters in Ukraine in 2014 deeply alarmed Moscow and helped turn Ukraine’s internal political struggles into a dangerous geopolitical confrontation.

Europe’s leaders have already denounced the election as rigged and set in motion sanctions against those responsible for the fraud and subsequent violence against protesters, and it is unclear what more they can do.

They want to defend democracy, fair elections and the rule of law as bedrock Western values. But they also want to avoid playing into Lukashenko’s narrative that the West intends to intervene with military force or to provide intelligence support for the Belarus opposition.

“The dilemma is that we cannot stay outside, given our values, but we cannot be part of the story, especially as this is not about the EU,” Speck said. “It’s totally different from Ukraine in that regard.”

So long as the Belarus opposition avoids turning the struggle against Lukashenko into a fight against Russia or the Russian language, something some Ukrainians did in 2014 when they put Putin’s face on rolls of toilet paper and doormats, the Kremlin would probably refrain from drastic measures. One possible substitute for Lukashenko is Viktor Babariko, a popular would-be candidate in the recent presidential election who was arrested before he could run. For two decades, Babariko headed a Belarus bank owned by Gazprom, Russia’s state-controlled energy giant.

Lukashenko reviled the former banker, labeling him a Russian puppet, a claim for which there is no evidence but one that could make Babariko appealing to the Kremlin.

In a video statement on Monday, Sviatlana Tsikhanouskaya, the main opposition candidate in the presidential election, put herself forward as an interim leader until new elections can be held. But she is likely to be viewed with suspicion by the Kremlin since she has spent the last week sheltering in Lithuania, the NATO member to which she was forced to flee last week.

Lukashenko has sought to present himself as the only leader who can halt turmoil that he said is “no longer just a threat to Belarus” but Russia, too.

But the leader of Belarus “was never really pro-Russian and was always just using Russia” as a supplier of cut-price oil and natural gas, said Trenin, the head of the Moscow Carnegie Center.

The spectacle of mass protests in Minsk certainly alarms the Kremlin. Since Putin came to power 20 years ago, he has had an aversion to so-called color revolutions, popular uprisings in former Soviet lands that Russia has always seen as the work of Western intelligence agencies, rather than the result of any genuine local grievances.

Adding to this alarm have been weeks of protests in the Russian Far East, where protesters in the city of Khabarovsk have, of late, sometimes waved the red and white flag of the Belarusian opposition. “Belarus, we are with you,” a group of Khabarovsk protesters chanted last week.

Lukashenko has worked hard to play on the Kremlin’s phobias, claiming variously that the unrest in Belarus has been orchestrated by Poland, a member of NATO; by Ukraine; by the Russian opposition leader, Alexei Navalny; and by Open Russia, an organization financed by the self-exiled Russian oligarch and long-standing Kremlin critic, Mikhail Khodorkovsky.

The effort has partly worked, at least with Russian state media and with the great number of Russian politicians who are prone to view the world through the prism of conspiracy theories.

Television has featured a parade of pro-Kremlin analysts denouncing Lukashenko’s opponents as stooges of the West and victims of an “information war” led by Poland. (Poland is the base of an influential social media account widely used by the opposition to spread news, some of it fake, about the protests and police brutality.)

But some of the Kremlin’s most faithful voices in the state news media have openly challenged Lukashenko’s fitness to govern. Last week, a prominent pro-Kremlin politician, Konstantin Zatulin, denounced the Belarus leader as “deranged” and his reelection as “a total falsification.”

Vladimir Solovyev, a talk-show host who often channels the Kremlin’s views, on Saturday broadcast video footage that clearly contradicted claims by Lukashenko’s government that a protester killed last week had died from self-inflicted wounds after an “unidentified explosive device” blew up in his hands. The footage indicated that he was actually shot by the security forces.

“There was no explosive device. This is a total lie,” said Solovyev. He also questioned the veracity of stories put out by the opposition.

Workers at the factory visited by Lukashenko on Monday gave their own verdict on whether what their president says is true. “Liar, Liar,” they shouted.