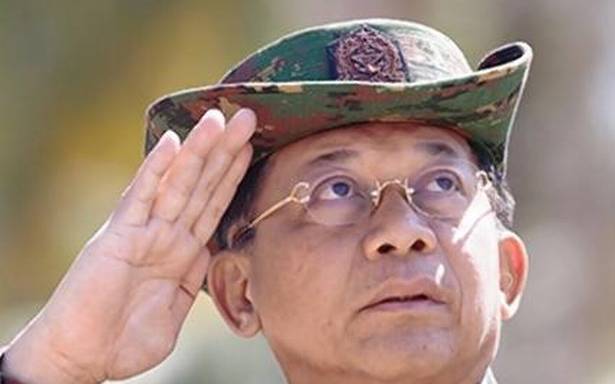 It vows to abide by law, says chief’s remarks misinterpreted

Myanmar’s military on Saturday vowed to abide by the country’s Constitution, in an apparent backtracking after its commander-in-chief spurred fears of a coup when he suggested the junta-scripted charter could be repealed.

Tensions ramped up on Tuesday when a military spokesman refused to rule out the possibility of a coup.

A day later, Army chief General Min Aung Hlaing — arguably the most powerful person in Myanmar — said revoking the 2008 Constitution could be “necessary” under certain circumstances.

His comments — translated into English and published in Army-run Myawady newspaper — sent shockwaves through the nascent democracy, only a decade out of the grips of a 49-year military junta.

On Saturday, the Army released a statement claiming its commander-in-chief had been misunderstood, though the statement did not directly address fears of an imminent coup.

“Other organisations and media misinterpreted the commander-in-chief’s speech and framed it from their point of view,” said the statement.

“Tatmadaw is abiding by the current Constitution… and will perform within the law by defending it,” it added, referring to the Army by its official Burmese name.

The last time the country saw its Constitution revoked was in 1988, when the military reinstated a junta after a popular uprising.

The General’s comments on the Constitution drew alarm from more than a dozen foreign missions and the UN, while smaller political parties called for a resolution between Ms. Suu Kyi and the military.

The country’s highest Buddhist authority even stepped in, with the senior monks of the State Sangha Maha Nayaka issuing a statement late on Friday calling for negotiations to prevail “instead of heated arguments”.

The military is alleging 10 million cases of voter fraud in November’s polls, and is demanding the Election Commission release the electoral roll for cross-checking.

The Election Commission has denied fraud, though it has conceded that there were “flaws” in the lists of voters.