Museum of London director Sharon Ament said it would also like to display a similar Sadiq Khan balloon, which had depicted the London Mayor in a yellow bikini during demonstrations last year. 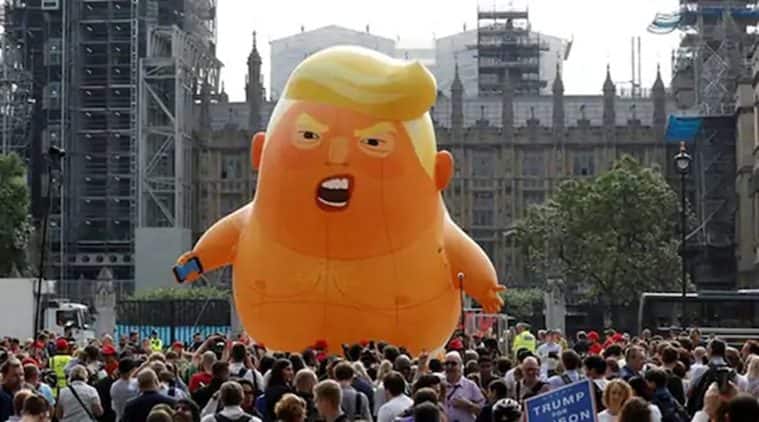 The Museum of London is in talks to acquire the giant orange balloon depicting Donald Trump as an angry baby, which is set to soar above London to coincide with the US President’s three-day UK state visit starting Monday.

The huge inflatable so-called Trump baby blimp, clad in a nappy and clutching a mobile phone, first took to the skies during the president’s last UK visit in 2018. The effigy is once again set to join hundreds of demonstrators as they take to the streets to register their protest against the state visit.

In the interest of balance, Museum of London director Sharon Ament said it would also like to display a similar Sadiq Khan balloon, which had depicted the London Mayor in a yellow bikini during demonstrations last year.

“They’re both really important and of their time. They characterise a satirical characteristic of British people, the way in which we sometimes respond to big issues using satire. They acknowledge the social discourse and dialogue in society at the moment,” said Ament.

She revealed that the museum began talks with the owners of the famous Trump blimp last year.

“We are in an open discussion and they are very warm (to the idea). They would like it to come to the museum,” Ament added.

The free to visit museum tells the story of the British capital from 450,000 BC to the present day. The massive size of the balloons means they would go on display only once the museum has moved from its current central London site to a larger space in West Smithfield area of the capital by 2024.

The Trump blimp was first flown over Parliament Square during the US President’s working visit to the UK in July 2018. Campaigners raised almost GBP 18,000 to pay for the 19.7-foot inflatable and the London Mayor had given permission for it to fly.

“It’s extraordinary how some objects can capture the public imagination; certainly the balloon really did,” said Ament.

The Stop Trump Coalition and Stand Up to Trump protest groups said they expect large turnouts for their demonstrations this week.

The Metropolitan Police said it had “a very experienced command team” leading the operation to deal with the visit.

“We are anticipating a number of protests to take place across central London throughout the duration of the President’s visit,” a Met Police statement said.

“This is a multi-faceted security operation, and whilst the Met has a responsibility to ensure the right to peaceful protest, this needs to be balanced with the complex requirements of this policing plan,” it added.