With temperatures of 33 degrees Celsius (91 degrees Fahrenheit) or higher predicted for the devastated areas in Okayama and Hiroshima prefectures, attention was turning to preventing heat-stroke among rescue workers and in evacuation centres where thousands of people sought shelter.

Prime Minister Shinzo Abe headed for the flood-stricken western part of Japan on Wednesday as the death toll from the worst weather disaster in 36 years passed 160 and health worries increased amid scorching heat and the possibility of new floods. Torrential rain unleashed floods and landslides in western Japan last week, bringing death and destruction in particular to neighbourhoods built decades ago near steep slopes.

At least 161 people were killed and 57 are missing, NHK national television said, in Japan’s worst weather disaster since 1982. Abe, who cancelled an overseas trip to deal with the disaster, has been criticised after a photograph circulated on Twitter showing him and his defence minister at a party with lawmakers just as the rains intensified. He was set to visit Okayama prefecture, one of the worst-hit areas, later on Wednesday.

Abe is up for re-election as party leader in September and has seen his support rates edge back up after taking a hit over a cronyism scandal earlier this year. His government pledged an initial $4 billion towards recovery on Tuesday, with the chance of a special budget later if needed.

Scorching sun beat down as rescuers combed through heaps of wood and thickly caked mud in an increasingly grim search. With temperatures of 33 degrees Celsius (91 degrees Fahrenheit) or higher predicted for the devastated areas in Okayama and Hiroshima prefectures, attention was turning to preventing heat-stroke among rescue workers and in evacuation centres where thousands of people sought shelter. 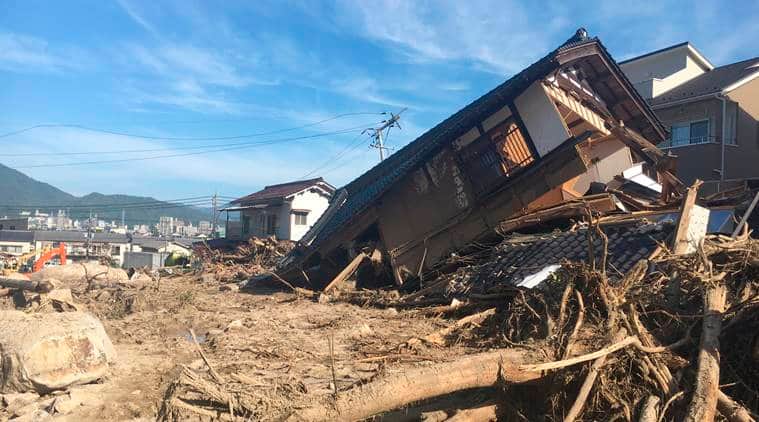 People sat cross-legged on thin mats on a gymnasium floor in one centre, plastic bags of belongings piled around them and bedding folded off to the side. Portable fans turned slowly here and there as children shrieked.

Officials turned to social media to warn of the additional danger of food-borne illnesses, counselling people to wash their hands and take other measures against food poisoning. Evacuation orders were issued for 25 households in the city of Fukuyama after cracks were found in a reservoir. Water accumulating behind piles of debris blocking rivers also posed a growing danger, as was seen on Monday when a swollen river began pouring into a residential area, prompting additional evacuation orders.

The intensifying heat was also contributing to unsettled weather conditions likely to lead to thunderstorms later on Wednesday, with authorities warning new landslides could easily be set off on mountainsides saturated with water.