After a remarkable 45-minute joint press conference, the White House struggled to explain why Trump aligned so closely with the Russian leader, a chief geopolitical foe.

President Donald Trump’s first summit with Russia’s Vladimir Putin left a wake of confusion and outrage in the US. After a remarkable 45-minute joint press conference, the White House struggled to explain why Trump aligned so closely with the Russian leader, a chief geopolitical foe. Several prominent Republicans expressed disappointment with the president’s performance. Intelligence officials publicly broke from the president’s comments about Russian meddling in the 2016 campaign.

The aftermath was a reminder of Trump’s singular, political positioning. After a year and a half in power, Trump still alienates both his party and some in his own government.

A look at what else we learned from their joint press conference:

Since the first intelligence assessment finding that Russia interfered in the 2016 campaign, Trump has zigzagged on whether he actually believes it. When pressed publicly, he says he accepts Russia’s involvement but then later suggests he has doubts.

The indictment Friday of 12 Russian officials on charges of hacking and other related crimes does not appear to have changed his mind.

“I don’t see any reason” why Russia would interfere in the election, Trump added, while then claiming he maintains confidence in the intelligence community. “I have confidence in both parties,” he said of Putin and US intelligence.

Trump’s comments Monday offered insight into why he’s so reluctant to acknowledge Moscow’s role. Asked about the finding, Trump quickly slipped into a defense of his legitimacy, calling his bid “a clean campaign.” For the president, it seems any conversation about foreign meddling is an attack on his claim to the office. In his remarks Monday, he proved himself unwilling to remove the issue from politics or view it as a security threat or a challenge to US democracy. 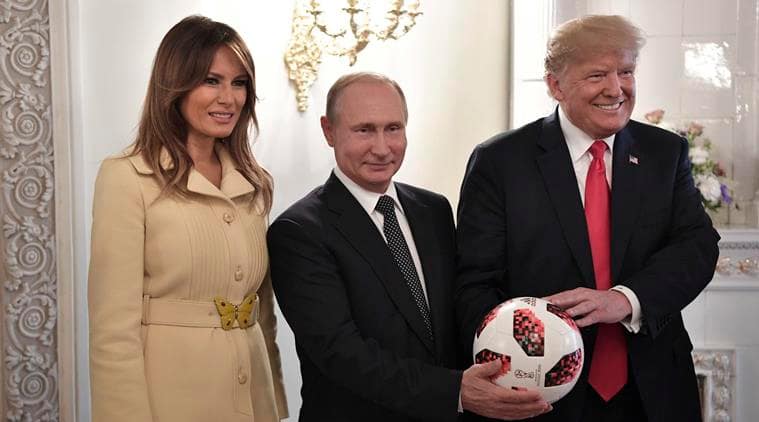 The Russian leader confirmed international suspicions and the assessments of the US intelligence community that he was rooting for Trump over Hillary Clinton during the 2016 US presidential election.

“Yes, I did,” Putin said, when asked if he wanted Trump to win. “Yes, I did. Because he talked about bringing the US-Russia relationship back to normal.”

After all, there was little love lost between Putin and Trump’s opponent, former Secretary of State Clinton, who had grown increasingly critical of his government’s actions in Ukraine and Syria.

Russia has used election meddling before to undermine public confidence in democratically elected governments. Even if Putin didn’t specifically order meddling to benefit Trump in 2016, US officials say Russia tried to undermine Americans’ faith in their government.

Putin appeared to poke at the sensitive subject Monday when he responded to a question about meddling by asking, “Do you believe United States is a democracy?”

Putin was in the driver’s seat during the news conference _ speaking first and easily parrying with reporters. Trump, whose opening remarks were delivered from notes, appeared uncomfortable at some points and defensive at others.

The leaders’ news conference was overshadowed by talk of 2016 and Russia interference, and as Trump remained focused on pushing back on questions about his election, the rest of the bilateral relationship was left to Putin to explain. Trump did not criticize Russia’s support for Syrian leader Bashar Assad, whom the US has called on to step down. Instead, Trump said the pair was committed to Israel’s security and maintained that the US and Russian militaries “do get along.”

Regarding Iran, Putin chastised the US president for weakening the Iran nuclear deal.

Trump did not communicate the US opposition to Russia’s annexation of Crimea, leaving it to Putin to note, when asked, the US position.

“(The) posture of President Trump on Crimea is well-known, and he stands firmly by it,” Putin said. “He continued to maintain that it was illegal to annex it.” PUTIN SAYS HE DOESN’T HAVE COMPROMISING MATERIAL ON TRUMP

Asked directly whether his government possesses embarrassing or incriminating material on the US president, Putin told reporters: “It’s hard to imagine greater nonsense.” He added: “Please get this rubbish out of your heads.”

Speaking to salacious claims about Trump’s business trips to Russia that first surfaced in an election-year dossier prepared by an ex-British spy, Putin said, “I did not even know he was in Moscow.” Trump has long denied the allegations and has used the partly unsubstantiated claims in the document, funded by Democrats, as a cudgel against the wider investigation of Russian interference.

Still in the afterglow of hosting the World Cup, Putin pulled out a red-and-white soccer ball and tossed it at Trump, whose country will co-host the 2026 tournament.

Praising Russia’s role as host, Trump said of the North American joint-host committee, “We hope we do as good a job.”

Trump said he’d give the ball to his 12-year-old son Barron, a soccer fan for whom he installed a soccer net at the White House. Then the US president tossed the ball to his wife, Melania, sitting in the front row.

Republican Sen. Lindsey Graham of South Carolina, an outspoken Putin critic who has an on-again, off-again relationship with Trump, tweeted: “If it were me, I’d check the soccer ball for listening devices and never allow it in the White House.”