For months now, pro-democracy protesters have gathered by the thousands to call for reforms to the monarchy and military, influential institutions that have dominated Thailand’s power structure for decades. 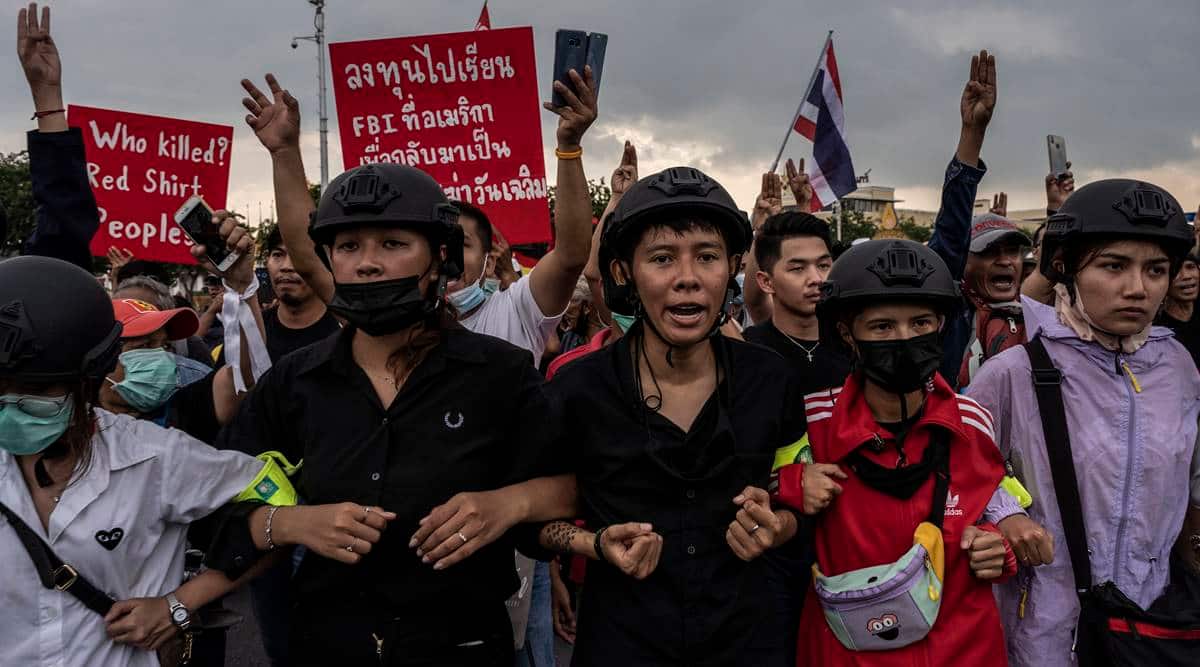 The cream-colored stretch Rolls-Royce limousine crawled past the angry crowds. The queen of Thailand smiled.

But what Queen Suthida Vajiralongkorn Na Ayudhya saw Wednesday, on a stately road in Bangkok, may have been sobering.

Anti-government protesters yelled “my taxes!,” referring to their personal contributions to royal coffers. The police held them back but could not hide the demonstrators’ defiant salutes.

For months now, pro-democracy protesters have gathered by the thousands to call for reforms to the monarchy and military, influential institutions that have dominated Thailand’s power structure for decades.

But the royal limousine’s route Wednesday was the first time that members of the nuclear royal family had gotten such a close look at the faces of Thais who are openly questioning the monarchy’s exalted position in the country. Thailand’s King Maha Vajiralongkorn Bodindradebayavarangkun and some of his immediate family — the queen, who is his fourth wife, and his youngest son, the heir apparent — live most of the year in Germany.

By Thursday morning, Prime Minister Prayuth Chan-ocha of Thailand, a retired general, had ordered riot police to clear the protesters from their rally site near his offices at Government House, where they had camped out overnight calling for his removal.

Officials imposed an emergency decree in Bangkok, and gatherings of five or more people were not permitted. The decree also banned news or online content that “could create fear or intentionally distort information” by compromising national security or damaging peace and order. 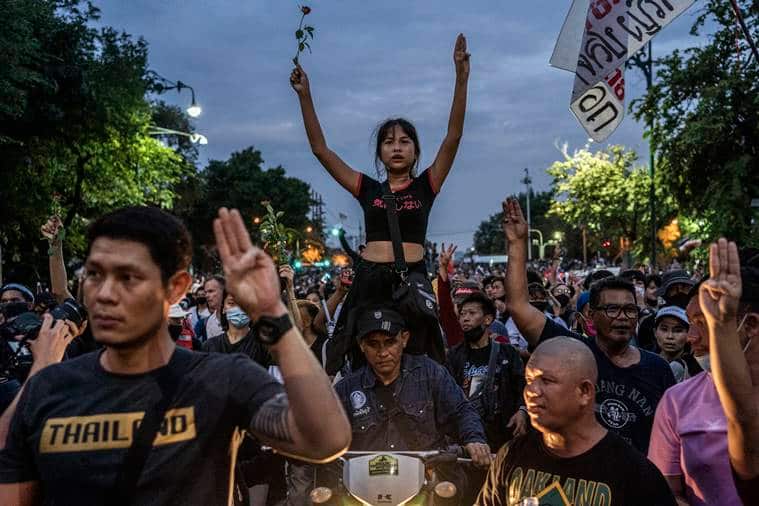 The government of Prayuth, who came to power in a 2014 military coup, was also given purview to declare any area off-limits to potential demonstrators. The protesters have vowed to regroup Thursday afternoon in a busy shopping district.

The simple act of a royal motorcade driving near an anti-government protest, and the swift crackdown that followed, might not seem a watershed moment. But Thailand is no ordinary constitutional monarchy. It is bound by some of the world’s strictest lèse-majesté laws criminalizing criticism of the crown. During public occasions, Thais are expected to stand for an anthem praising some of the richest royals on the planet. When politicians are given an audience with the king, they typically prostrate themselves and crawl forward in a sideways slither.

But as the protest movement has strengthened over the past three months, taboos surrounding the monarchy have fallen in rapid succession. In Parliament, opposition legislators are demanding an investigation of royal budgets. (After his father’s death in 2016, King Maha Vajiralongkorn took personal control of the crown’s assets.)

In cinemas, people no longer feel obliged to stand for a photo montage of the king that precedes each screening.

And protesters, old and young alike, have demanded that the 10th king of the Chakri Dynasty, who was formally crowned last year with a 16-pound Great Crown of Victory, not be positioned above the country’s constitution.

“We are going to fight for democracy, fight for freedom, fight for the equality of us as human beings,” a protest leader popularly known as Justin Samutprakan said Wednesday. “We will not bow, prostrate, crawl ever again.”

“As humans, no one is bigger than anyone,” he added. “No one has power more than others.”

Dozens of protest leaders, many students, have been arrested in recent weeks and charged with crimes like sedition that carry imprisonment for up to seven years. Early Thursday, at least three protest leaders, Arnon Nampa, Parit Chirawat and Panupong Jadnok, were arrested, according to the Thai Lawyers for Human Rights group. Each had been arrested before.

The rally Wednesday also brought out large numbers of royalist counterprotesters in yellow shirts symbolizing their loyalty to the king. Some had the matching buzz cuts often worn by members of the security forces, suggesting that their defense of the Thai crown was an official duty rather than a personal mission. 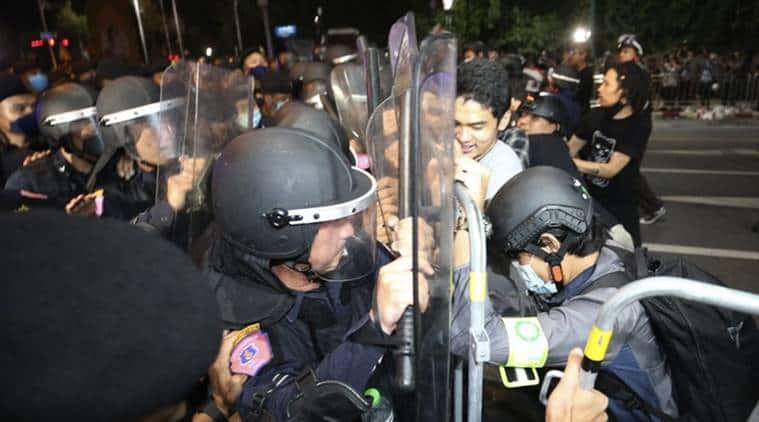 As the crowds for both sides swelled Wednesday, some people in a country conditioned to regular bouts of political violence feared that clashes might break out. But aside from a few scuffles, the anti-government rally, which pushed past barricades to march toward Government House, was peaceful.

King Maha Vajiralongkorn is now back in Bangkok for weeks, a rarity for a monarch who normally spends no more than a couple of days in the country he reigns over.

“We have made it clear that politics concerning Thailand should not be conducted from German soil,” Maas said in a parliamentary session.

Street protests have regularly gripped Thailand over the past two decades. The security crackdowns on some of those mass rallies have been bloody, with dozens of people killed. Over the past few years, outspoken dissidents who fled overseas after criticizing the monarchy and the military have disappeared. Some of their bodies have washed up with obvious signs of foul play.

“Thailand’s international friends should call on the government to stop arresting peaceful protesters, listen to their views, and allow them to freely and safely express their visions for the future,” Brad Adams, Asia director for Human Rights Watch, said in a statement. 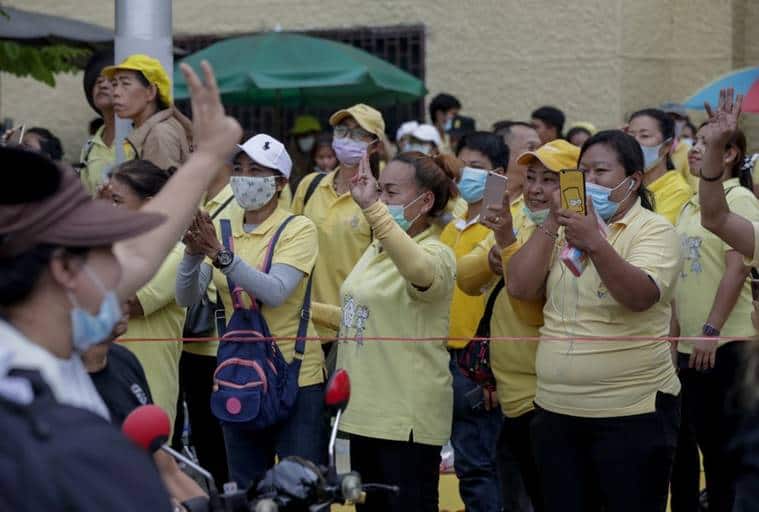 The security presence Wednesday was formidable. About 15,000 police were dispatched to the protest area near Democracy Monument, built to commemorate the end of absolute monarchy in 1932. Public buses were parked to block the path toward Government House.

Thai political history is littered with army coups that have nullified the results of national elections. The junta leaders that conceived of the past two putsches justified their actions as necessary to protect the monarchy from naysayers. The last coup, in 2014, was followed by the passage of an army-drafted Constitution that has eroded democratic institutions further. The Senate, for instance, is now entirely appointed.

The protesters have called for a new charter and for fresh elections, after a national vote last year that was dismissed by some international observers as neither free nor fair.

“We have been imprisoned in a special prison called Thailand for a long time,” said Attapon Buapat, another protest speaker.

The protest movement has woven together disparate strands of dissatisfaction, ranging from frustration with school uniform rules to anger at the lavish lifestyle of the king at a time when a coronavirus ban on international tourism has hit Thailand’s economy hard. The date of the protest Wednesday evoked a student-led uprising Oct. 14, 1973, that led to the toppling of a military dictatorship. During the turmoil, under the reign of the current king’s father, the gates to one of the royal palaces were opened to shelter students fleeing the gunfire.

On Wednesday evening, after dark fell, a group of protesters tried to extend part of the rally toward a royal palace. But rows of yellow-shirted royalists stood guard. The protesters fell back. By Thursday morning, they were all gone.

Panusaya Sithijirawattanakul, a protest leader who has been one of the fiercest critics of the monarchy’s role in Thai society, even as she has cautioned that she does not want the royal institution overthrown, said Thursday morning that the right to free assembly should be guaranteed in a democracy.

“It is the fundamental right of all human beings from birth,” said Panusaya, who was arrested later Thursday morning. “The emergency decree could be interpreted as the monarchy setting itself up as an opponent of democracy.”