‘In the end, you are left weeping not for the desh bhakt hero or his broken leg/heart, but because the movie is finally over and you can get back to your life,’ says Stanessa Fernandes. 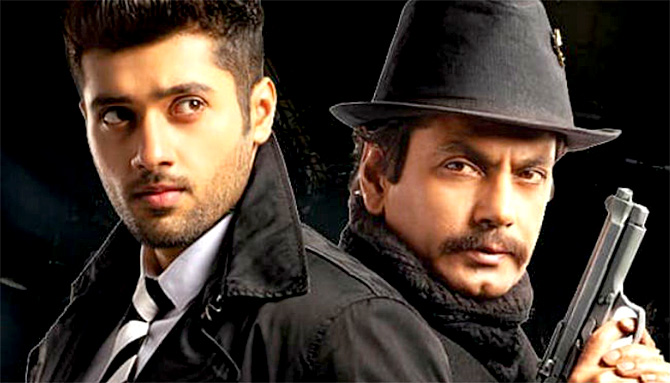 Anil Sharma’s Genius didn’t turn out to be a work of genius as the director had thought and planned.

The movie has a very confusing plot as it constantly flashbacks into the past.

Debutants Utkarsh Sharma and Ishita Chauhan’s performances are underwhelming, emotionally flat and hardly do justice to the film’s average script.

The dialogues are cornier than a corn field:

Take this, for example:

The story begins with Vasudev (Utkarsh), a ‘brilliant’ IIT student, who is offered a full-time job at R&AW.

He gets fired for being medically incompetent.

Later, we realise he had failed in a previous mission.

Vasudev finds his love interest Nandini (Ishita) while studying at IIT and ends up unhappily married.

The first half of the movie is slow and mundane. I found it difficult to stay awake.

The only good part of the first half is that we get introduced to MRS (Nawazuddin Siddiqui), who is part of the ISI, and involved in terrorism.

Genius is also a victim of Himesh Reshammiya’s music. Just when the audience tries to understand the plot, they are tortured with bad songs.

In the second half, the story tries to clarify the doubts and confusions created in the first.

Some scenes are plain bizarre and illogical.

Even strong performances from Mithun Chakraborty and Nawaz can’t save this film from being so tacky.

Genius is mostly unintentionally funny because your reactions are the exact opposite to the situations on screen.

In the end, you are left weeping not for the desh bhakt hero or his broken leg/heart, but because the movie is finally over and you can get back to your life.

Arvind Kejriwal: Second wave of COVID-19 hits its peak in Delhi, number of cases to decline in coming days

‘Want justice and only justice’: Son of killed BDC chairman in Budgam

Man jailed for constable’s murder booked for assaulting jail assistant
We and our partners use cookies on this site to improve our service, perform analytics, personalize advertising, measure advertising performance, and remember website preferences.Ok