Although not quite confirmation for any shared universe theories, one episode in the new animated series offers three beloved characters a quick cameo. Step forward Fry, Bender and Professor Farnsworth.

Check them out below: 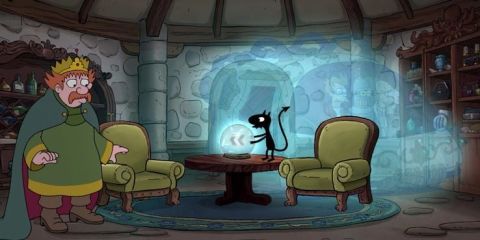 During episode 10 ‘Dreamland Falls’, Luci the demon offers King Zog a peak at historical events in Dreamland using a magical ball. It flicks between images of Bean and several periphery characters before a flash of Fry, Bender and the Professor appearing in their spacecraft.

Featuring in Futurama season 6 episode ‘The Late Philip J. Fry’, this spacecraft acts a time machine built by Farnsworth to travel forward into the future. Here, they discover the cyclical nature of time and loop around the whole of history and back to their starting point.

Now, Disenchantment‘s connection to Futurama extends in that this aforementioned flash represents the space crew’s visit to Dreamland on their way back to the present day (well, the 31st century). This throws Groening’s new medieval/fantasy show somewhere into the past of Futurama‘s universe. Cool right? 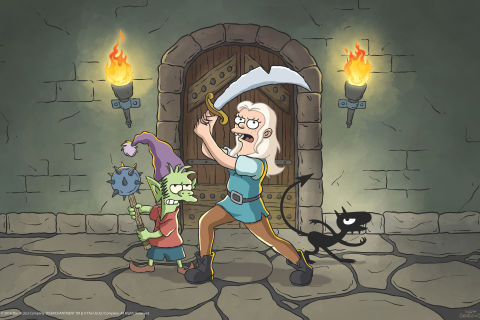 Meanwhile, The Simpsons star John DiMaggio has a close relationship with Groening, and recently teased the “filth” present in Disenchantment.

“I, unfortunately, am not that smart so I go to the gutter immediately. They paint a very beautiful picture of the gutter.”

Disenchantment is now available on Netflix.