Some films have franchise potential written all over them. After a hit first movie a sequel is quickly planned, only to vanish without a trace – sometimes for the strangest of reasons.

Here are eight times fate, folly or Jessica Rabbit-hating stopped a potential franchise in its tracks. 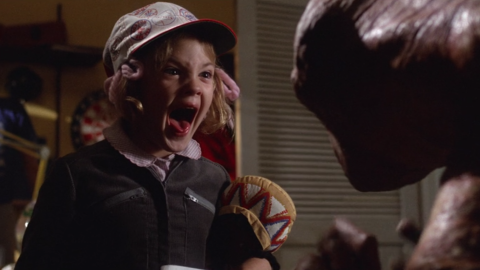 Over the years there have been peculiar rumours about the proposed E.T. sequel – notably that it would have been a horror film. The weird thing is, they’re true – sort of.

E.T. 2 – subtitled Nocturnal Fears – was never an outright fright flick, but it was certainly of a darker hue than the original. The proposal by Steven Spielberg and original screenwriter Melissa Mathison would have reunited us with Elliott, Gertie, Michael and the rest the year after bidding their little space pal farewell.

Rather depressingly, the treatment suggests that they’ve sunk into melancholy following his departure, so when another spaceship lands, they’re delighted. But these new E.T.s aren’t nice at all – they have red-eyes, kill cattle and eventually abduct and torture Elliott before the O.G. E.T. comes to the rescue.

Aside from the more gruesome tone, the truth is that Spielberg was never sold on the idea of making a sequel to, well, any of his films until Indiana Jones and the Temple of Doom. Specifically, he was worried that the movie “would do nothing but rob the original of its virginity”, whatever that means. Nocturnal Fears was never anything more than a sketched-out idea and, honestly, it’s probably for the best that it was abandoned. 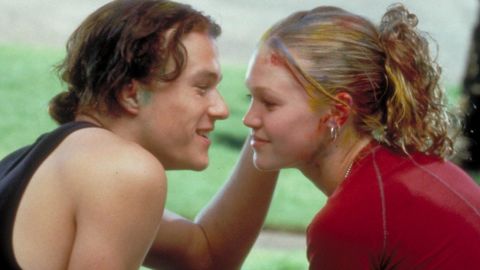 10 Things I Hate About You had a scorching cast (including Heath Ledger, Julia Stiles and Joseph Gordon-Levitt), bags of charm and made a solid dent in the box office. Still, there was little to suggest a sequel until 2012 when original director Gil Junger revealed that he was working on a new film, 10 Things I Hate About Life.

Rather than be a direct sequel, Life would be a new story with similar themes: a depressed boy and girl meet and fall in love. Initially, Hayley Atwell was attached to the project before being replaced by Evan Rachel Wood, alongside Thomas McDonell, Billy Campbell and Élodie Yung.

While filming was a month late in starting, it did start. December 2012 saw the beginning of principal photography, but production just two months later. It was anticipated that the film would be completed later that year, but it never was.

Depending on who you listen to either some gross financial stupidity, or Wood throwing a strop.

In 2014, the film’s production company, 10 Things Films LLC, sued Wood for some $30 million, after she allegedly walked away from the project without warning. For her part, Wood strongly denies this, calling the accusations “preposterous and simply a bullying tactic from financially troubled producers”.

The suit appears to have since come to nothing, but the film was never completed and looks unlikely to ever be. Still, some of it does exist: a trailer is online and half-an-hour of footage was shown at the American Film Market in November 2013. 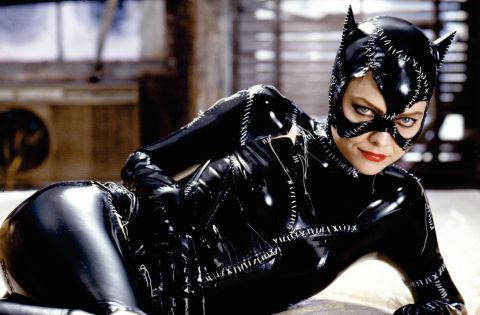 Whatever your thoughts on Batman Returns, few would argue that Michelle Pfeiffer’s take on femme fatale Selena Kyle was a standout performance that captured the look and the feel of the character to a tee. Indeed, Warner Bros were so enamoured with her, a standalone feature was quickly planned with Burton once again slated to direct. This was at the height of Pfeiffer’s power, so a film starring the actress packed almost guaranteed box office whammy.

It was canned for being “too gritty” in tone. Burton’s much darker second Batman film had proved divisive and the main franchise was handed over to Joel Schumacher. Burton remained attached to the Catwoman film, but in the wake of Schumacher’s neon-tinged Batman Forever, the spin-off was shelved. Warner Bros might have done things differently if they knew the embarrassment Schumacher’s Batman movies would ultimately cause. 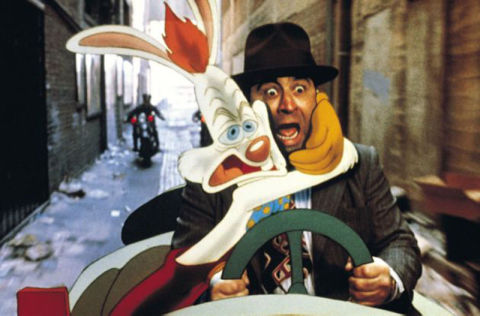 Ever since Who Framed Roger Rabbit reignited interest in animation in the late 80s, there’s been talk of a sequel. For his part, director Robert Zemeckis has always been keen to return to the noirish comedy, talking up various prequels and sequels from The Toon Platoon – which saw Roger take on the Nazis – to Who Discovered Roger Rabbit? which would see him search for his real mother. Nothing came of any of them.

Steven Spielberg’s refusal to include comedy Nazis stopped Toon Platoon in its tracks, while Zemeckis blames Disney’s aversion to Jessica Rabbit for the lack of a sequel, stating “the current corporate Disney culture have no interest in Roger, and they certainly don’t like Jessica at all”. 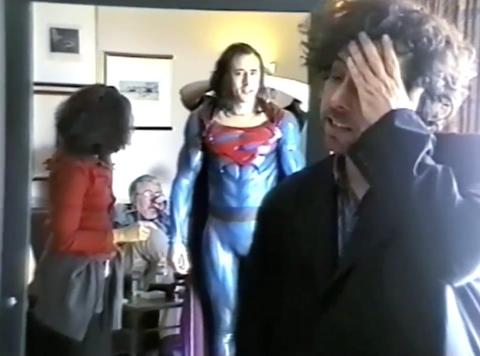 Perhaps the best known of all abandoned sequels, Superman Lives is so infamous, there’s even a documentary movie about it – The Death of Superman Lives: What Happened?

Originally titled ‘Superman Reborn’, this was an attempt to reinvent the franchise after the disastrous Superman IV: The Quest for Peace. Loosely based on the iconic ‘Death of Superman’ comic story (soon to be released as an animated movie), it went through many drafts and several screenwriters including Kevin Smith. Tim Burton was slated to direct the flick and Nicholas Cage – a hardcore Super-fan who owns a mega-rare copy of Action Comics #1 worth some $3 million – was cast as the last son of Krypton. All very promising…

It got very expensive, very quickly. Nowadays $190 million would be considered high, but not unrealistic, for a superhero film – the first Avengers cost an additional $30 million, for example. At the time, however, Warner Bros were not willing to stump up the cash and after spending a year in pre-production, Burton quit.

Added to that was the fact that the script – in its many iterations – was always a bit… off. Superman was portrayed as a brooding loner who had more or less rejected his human side, while the villains – Braniac and Lex Luthor – merged to form a single evil entity. Oh, and producer Jon Peters apparently insisted that the film’s climax had to feature Kal-El battling a giant spider for some unknowable reason.

The project stumbled along for a bit before being abandoned, replaced with Bryan Singer’s Superman Returns. Still, at least the hilarious photos of a long-haired Cage in the iconic costume are out there. 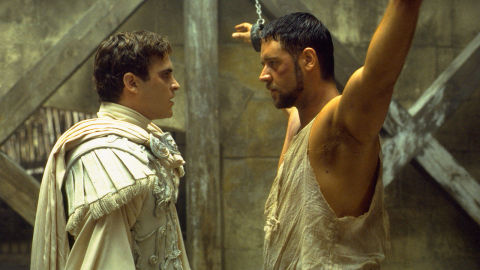 Wait… what? Well exactly. A few years after Gladiator briefly revived the swords and sandals genre, its star Russell Crowe decided that he wanted a sequel to happen. He knew screenwriter (and rock god) Nick Cave, gave him a call and asked him to pen a script that would resurrect the noble – and super-dead – Maximus Decimus Meridius.

Cave gleefully obliged with a script that saw the gods, vexed by the growing popularity of Christianity, resurrect Maximus and send him on a mission to assassinate Jesus. He would eventually become an immortal warrior fighting throughout all the great conflicts of history before ending up in the present day.

The whole script is online, in all its batshit glory. 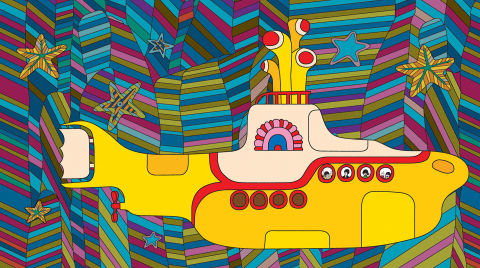 Not a sequel, but a reboot – and another casualty of cinematic trends. The original Yellow Submarine was The Beatles’ masterpiece of psychedelic animation. Having experimented with motion capture in The Polar Express and A Christmas Carol, Robert Zemeckis intended to use the same techniques to mount a dazzling 3D remake. He even hired tribute band The Fab Four to mo-cap the band, while David Tennant, Peter Serafinowicz, Cary Elwes and more were in talks to voice the moptops.

Mars Needs Moms happened. The 2011 mo-cap sci-fi comedy has the dubious honour of being the 12th worst opening of all time for a major movie. It was a cataclysm for Disney, who promptly binned the Yellow Submarine reboot in response. 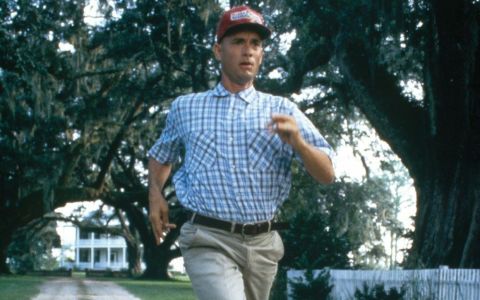 Forrest Gump was one of the ’90s biggest – and most critically lauded – hits. And while the ending doesn’t exactly scream sequel, there was still potential there. Winston Groom – the author of the original novel – certainly thought so.

He penned a novel, Gump & Co, that would act as both a sequel to his book and the movie. It saw Tom Hanks’ loveable savant stumble through the ’80s and ’90s, helping to bring down the Berlin Wall and fighting in Iraq along the way. Both Hanks and the original director, Robert Zemeckis (yes, him again) were interested in making the follow up.

Why didn’t it happen?

Somewhat grimly, 9/11 was responsible for the fim’s non-appearance. Screenwriter Eric Roth told Slashfilm, “I turned in the script the night before 9/11. And we sat down, Tom [Hanks] and Bob [Zemeckis] and I, looked at each other and said, we don’t think this is relevant anymore. The world had changed. Now time has obviously passed, but maybe some things should just be one thing and left as they are.”

Abrogation of Article 370 damaged India-China relationship
We and our partners use cookies on this site to improve our service, perform analytics, personalize advertising, measure advertising performance, and remember website preferences.Ok