Wimbledon Live Tennis Score, Novak Djokovic vs Rafael Nadal Live Streaming: The men’s semi-final will get play underway on Day 12 at Wimbledon with Novak Djokovic and Rafael Nadal resuming their matchup under the roof at Centre Court. Before the 11PM curfew time was breached on Friday, Djokovic had come through in a tense tiebreak. The winner goes on to play Kevin Anderson in the final on Sunday. Djokovic vs Nadal will be followed by the women’s final between Serena Williams and Angelique Kerber. It is a repeat of the 2016 final between the American and the German where Serena had triumphed. Catch live score and updates from Day 12 at Wimbledon.

Kevin Anderson and John Isner made plenty of records in their marathon match that was won 26-24 in the fifth by the South African. It last six hours and 35 minutes. All the numbers!

Hello and Good Evening! Welcome to our live coverage of Wimbledon 2018 from the All England Club. 14 hours after they went off court, Novak Djokovic and Rafael Nadal will be back, the roof will be closed and they would want to get the match done as soon as possible. For Nadal, the job will be doubly difficult as the conditions will be more suitable for Djokovic and he trails. Before the 11PM curfew, Djokovic defended set point opportunities for Nadal and grabbed one of his own. Final against Kevin Anderson on Sunday awaits.

Post that, Serena Williams and Angelique Kerber will take court for the women’s final. 10 months after Serena gave birth, nine months after Serena could barely move and needed support in mobility. And now, she is into the final of a grand slam. Queen? Super human! In her path of an eighth Wimbledon title stands Angelique Kerber. They had met in 2016 Wimbledon final as well where Serena had won. Repeat? 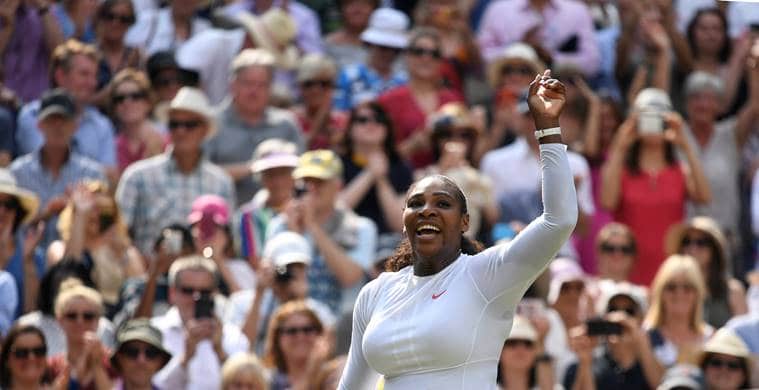 Wimbledon Live Score, Serena Williams vs Angelique Kerber Live: Serena Williams goes for her eighth Wimbledon title and first major championship since giving birth to daughter, Olympia, on September 1. The 36-year-old American takes on Angelique Kerber, who lost to Williams in the 2016 final. Williams, a 23-time Grand Slam champion, is playing just her fourth tournament since returning to action in March. Kerber, a two-time Grand Slam champion, is playing in her first major final since her triumph at the 2016 US Open. The German has rebounded nicely from a disappointing 2017, also reaching the semifinals at the Australian Open and the quarters at the French Open.