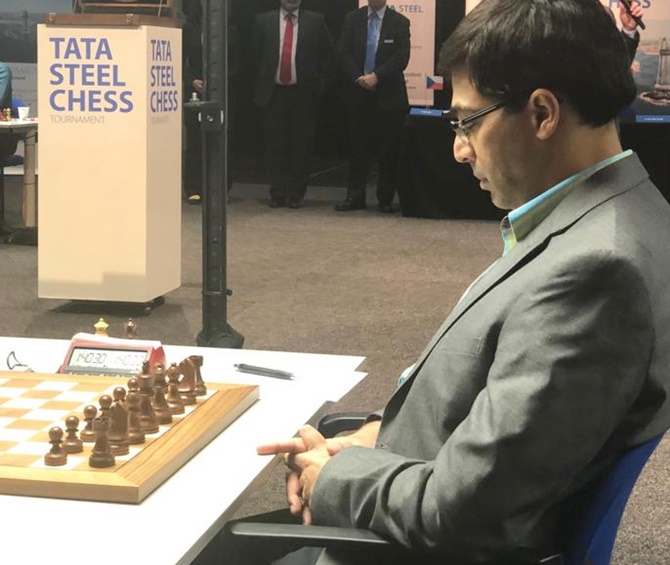 Five-time world champion Viswanathan Anand had to be content with a joint third place finish following a draw with compatriot Vidit Gujrathi in the 13th and final round of the Tata Steel Masters, in Wijk Aan Zee, The Netherland.

With three victories, a lone loss against winner Magnus Carlsen of Norway and nine draws, Anand ended the event on 7.5 points and will add six points to his existing rating. He is now sixth in world rankings.

Carlsen expectedly won the event after drawing rather easily with Anish Giri of Holland in the final round.

Leading by a half point over Giri, Carlsen started the day with black pieces and went for his recent pet Sveshnikov Sicilian.

Giri admitted he had not looked so deep and at one point sacrificed an exchange to spice things up.

Carlsen, who scored 9 points, thought if anyone was better it was black but simply chose a safer option to close the event. This was Carlsen’s seventh victory in the super tournament. Anand has won this event five times earlier.

The second place went to Giri who ended on 8.5 and it was a three-way tie for the third place shared by Ian Nepomniachtchi of Russia, Ding Liren of China and Anand respectively.

Gujrathi also proved that his elevation to the top group was not a flash in the pan as he ended a creditable sixth on 7 points.

Gujrathi lost two, won three and drew the remaining eight games. This result will also help the Nasik-based player to climb back in the 2700 rating club that he had temporarily left.

The final day did not provide much excitement. Anand opened with the king pawn and faced the Petroff defense which was also used by Jan Krzysztof Duda of Poland just a couple of days’ back.

Anand went for an old variation, resulting in a symmetrical pawn structure and Gujrathi equalized without much ado. The players decided to sign peace in 30 moves vide repetition.

Vladimir Kramnik of Russia became the biggest casualty losing a whopping 24 rating points and for the first time in 27 years the Russian will be out of top 15 in world ranking.

In the final round, Kramnik lost to Samuel Shankalnd of United States after stretching a drawn endgame.

In the only other decisive game of the final round, Richard Rapport of Hungary came good against Jorden Van Foreest of Holland.

In the Challengers section, Vladislav Kovalev of Latvia won yet another game to assure himself a place in the masters next year.