When Chennai Super Kings take the field, the franchise’S fans and staff can be rest assured that batting, bowling or fielding, Ravindra Jadeja is sure to make a contribution either way.

And it was a special night for the all-rounder on Tuesday, October 13, as he came good in all three departments, in a must-win match for the former champions.

Jadeja first contributed with the bat. Coming in at No 6 at the fall of Shane Watson’s wicket in the 17th over, Jadeja wasted no time. He got off the mark with a single, but in the next over three overs he played smartly while ensuring to log in the big hits.

He batted well with Mahendra Singh Dhoni, with whom he struck a 32-run partnership at the backend, allowing his captain to play his big shots while he hared down the pitch grabbing the singles and twos.

But once Dhoni was dismissed, Jadeja took charge. 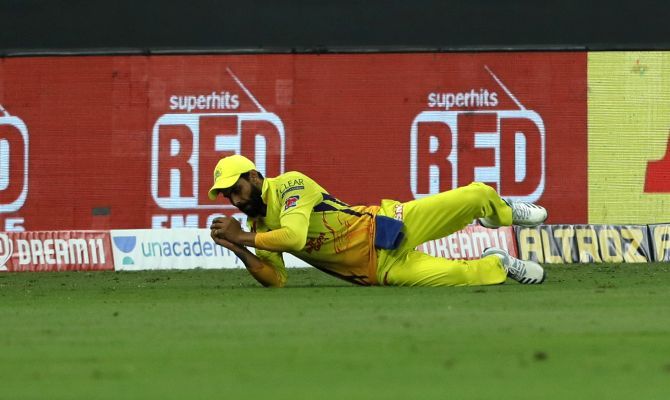 He struck two identical fours — between short third man and backward point — in consecutive overs in the 18th and 19th, before launching into Khaleel Ahmed in the last over. Jadeja took Ahmed to the cleaners with a six and a four before ending the over with a quick double to take CSK past the 160 mark.

When CSK came in to defend what was a par score, Jadeja once again struck the important blow with ball in hand. In his second over, he bowled Jonny Bairstow all ends up. This broke the crucial 32-run partnership between Bairstow and Kane Williamson and had SunRisers reeling at 60 for 3 at the halfway stage.

He also took two catches in the deep to see the backs of Priyam Garg and Vijay Shankar as Hyderabad failed to recover and Chennai won by 20 runs.