Manchester United’s Marcus Rashford said he spoke to Prime Minister Boris Johnson on Saturday and was briefed about the government’s plans to provide 170 million pounds ($220 million) of extra funding to the campaign.

Manchester United forward Marcus Rashford said he was overwhelmed by pride after the British government swung to support his call to provide free meals to vulnerable children during the winter holidays.

Rashford has campaigned for food vouchers during school holidays for children who normally receive free meals during term time if their parents receive welfare support.

Parliament last month rejected a Labour Party motion to extend free school meals until Easter 2021 from the cut-off before the half-term and winter holidays.

Rashford said he spoke to Prime Minister Boris Johnson on Saturday and was briefed about the government’s plans to provide 170 million pounds ($220 million) of extra funding to the campaign.

“There is still so much more to do, and my immediate concern is the approximate 1.7 million children who miss out on free school meals… because their family income isn’t quite low enough,” the 23-year-old said in a statement to British media. 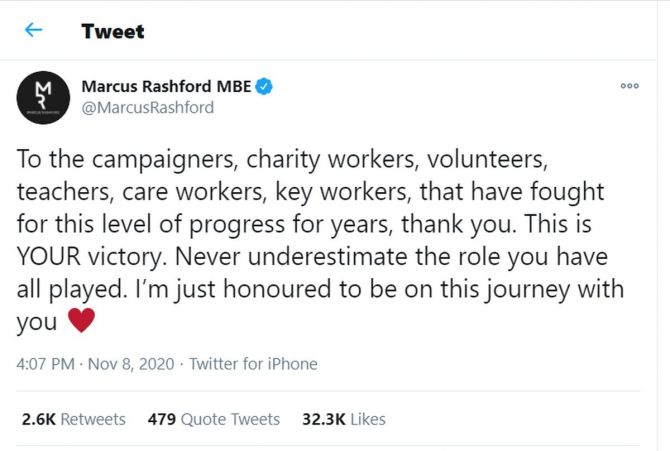 “But the intent the Government have shown today is nothing but positive and they should be recognised for that.

“The steps made will improve the lives of near 1.7 million children in the UK over the next 12 months, and that can only be celebrated.”

Rashford, who was awarded an MBE for his work in helping vulnerable children during the COVID-19 crisis, first forced a government U-turn in July when he won his battle to ensure free meals during school the summer holidays.

He then proposed extending the campaign for families receiving financial assistance from the government.

“As a collective we are so powerful and we all have a role to play in this. I’m overwhelmed with pride that we have made such significant progress. We will not give up on our children,” Rashford added.