It was Prajnesh’s maiden appearance at an ATP Masters event and he bagged 61 ranking points with his stupendous effort, which will catapult him to new career-best rank of 82. 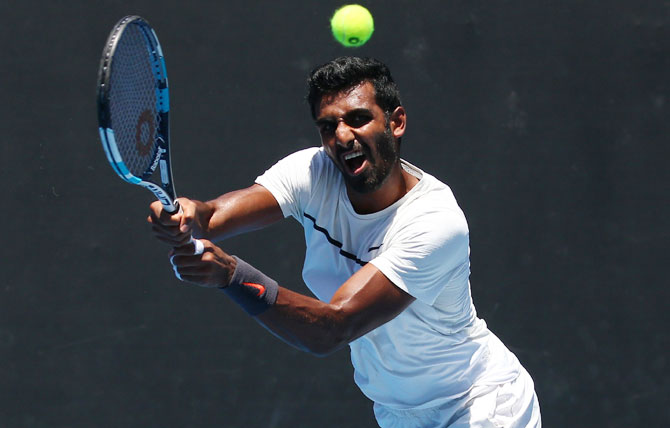 Prajnesh Gunneswaran’s terrific run at the Indian Wells Masters came to an end following a straight set defeat against big-serving Ivo Karlovic even as the left-handed Indian is confident of replicating success at the big stage consistently.

The Indian qualifier fought hard before losing 3-6, 6-7(4) in the third round to the tall Croat, who fired 16 aces in the one hour and 13-minute contest.

“It was very difficult to return his big serve. I had some chances, I did not take them and that’s pretty much what decided the match,” said Prajnesh, ranked 97, who could not convert any of the two break chances.

It was Prajnesh’s maiden appearance at an ATP Masters event and he bagged 61 ranking points for his stupendous effort, which will catapult him to new career-best rank of 82.

“Overall, it was very good run. I am confident I will be able to do this again. Obviously time will tell. Over a period of time I should be able to deliver such results consistently. I am not sure if it will always be at the Masters, or a 250 (tournament) or a Grand Slam. I hope it happens at the bigger events”

“At the end of the day, If I am consistently competing against these players and finding success then I am on the right track,” said the Chennai player, who earned a prize purse of $48,775.

The Indian youngster had a dream run at Indian Wells as he stunningly knocked out World No 18 Nikoloz Basilashvili in his previous match after he had got the better of fancied Frenchman Benoit Paire in the first round.

Meanwhile, India’s Rohan Bopanna and his partner Denis Shapovalov bowed out of the doubles after a 6-4, 1-6, 8-10 defeat against Novak Djokovic and Fabio Fognini in the second round.