The second innings in Old Trafford best illustrated his mastery of movements. 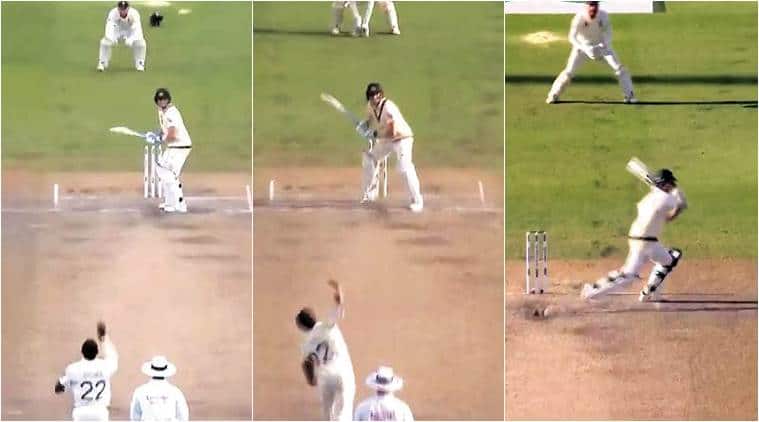 It’s usually the bowlers who manoeuvre the crease to create different angles, but Steve Smith prances and pirouettes in the crease like few other batsmen in history. The second innings in Old Trafford best illustrated his mastery of movements.

Usually Steve Smith makes a pronounced back-and-across trigger movement just as the bowler releases the delivery. He starts off with a middle and leg-stump guard, but by the time the ball reaches him, most of his back foot will be parallel to the off-stump while the toe will be outside it. When he completes the stroke, both his feet will be outside the line of the stumps. In fact, you can see all three stumps as he follow throughs. But in the frame above, where he was shaping up to face Stuart Broad during his 82 in the second innings at Old Trafford, Smith stood as still as he could at the crease, marginally moved his back foot, which is parallel to the middle-stump, while the front foot remained static, rooted to the line of the leg-stump, conceding an impression that he’s targetting the leg side, as is his wont. It’s as if he has put his a handbrake on his shuffle — he doesn’t twitch or fidget as he generally does. Only that he’s just playing around with the bowler’s line, as much as he does with his mind.

Most classical batsmen have minimalistic movements. But Smith is all over the crease, constantly shuffling and shifting,this side or the other, in the process creating unusual body positions, throwing bowlers off-kilter. However, he maintains impeccable balance. He barely falls over or over-balances. So is his head, which hardly wavers, his eyes closely tracking the ball. Also, he plays the ball right behind and under his eyes . A wide base when too helps. 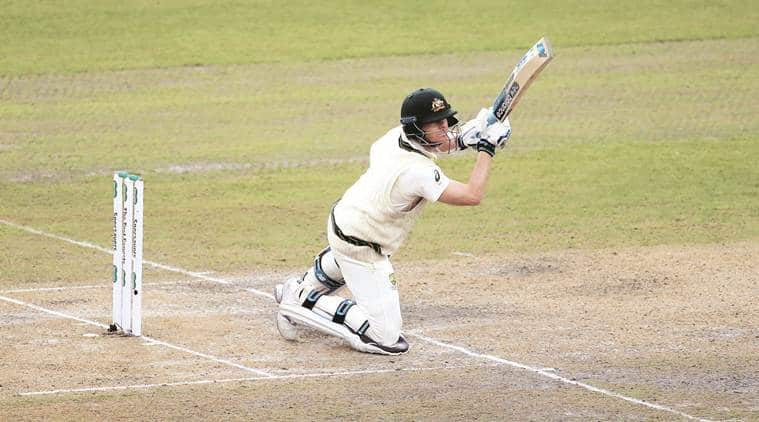 Second-guessing Smith’s intentions — a leg-side heave or a thump down the ground — Broad followed him with a shortish delivery at his body (or where Broad intended it to be). But Smith second-guessed Broad’s second guess, he cleared his front-foot away so pronouncedly that the curator could drive a mower through the space between his legs. Generally, the back foot remains still so that his base is stable, but here, as the ball started coming into him, he kept moving sideways. So massive was the movement that at the point the bat met the ball, just the toe of his back foot was in line with leg-stump. The front foot is closer to the edge of the leg-side line. By the time he completes the pull shot, he has swiveled so substantially that half his back-foot is outside the return crease, nearly hugging the adjoining strip, his body twisted almost 180-degree, ending up front-on with the square-leg umpire. Even the pull is not one fluid horizontal swish. It descends diagonally — giving him the option to change his plan at the last moment —before it gets fully horizontal. The mastery of crease-movements, late and decisive movements, makes Smith an incredibly difficult batsman to face. Validation arrived next ball. Pre-empting his leg-side shuffle, Broad ended up bowling a horrific leg-side wide. In the next over, against Jofra Archer, he shuffled across as he normally does, then opened up, conceding an impression that he was going downtown, but realising the length was fuller and Archer is much quicker than Broad is, he covers the stumps, goes deep back into the crease, crouches and digs the ball before wristing it through square-leg. The stumps, this time, were mostly covered by his pads — you could just see parts of the leg-stick.