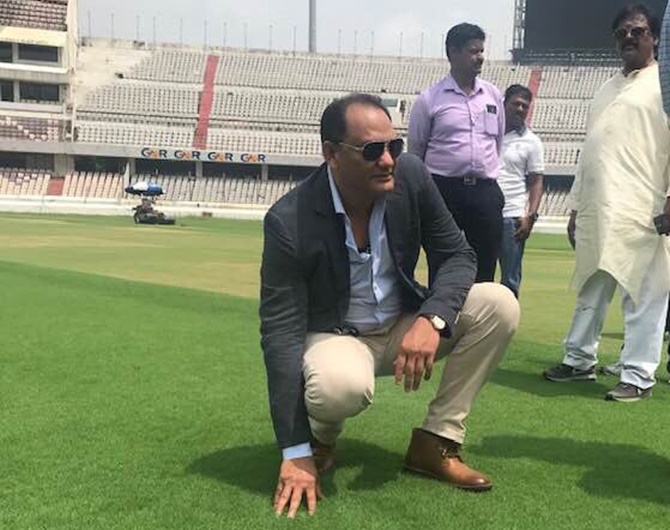 While Laxman cut the thread to mark the opening of the stand, former India off-spinner Noel David, Venkatpathy Raju and fast bowler Mohammed Siraj were also present on the occasion.

Talking about the moment, Azhar said he was honoured.

“I am extremely honoured to be bestowed upon such an honour. I have always played the game to the true spirit and will be striving to develop the game in Hyderarabad,” Azhar said.

Asked about the efforts required to arrange the first T20I in Hyderabad at such a short notice, Azhar said: “The day Mumbai showed their reluctance to host the first T20, I then and there said to my colleagues, we will host it no matter what.”

“I then contacted BCCI president Sourav Ganguly and the Mumbai Cricket Association officials and after a few parleys managed to convince that Hyderabad is ready to host the match.”

Azhar said during his tenure his prerogative would be to take Hyderabad cricket forward.

“I am here to serve the game which gave me what I am today. I involved with administration to take Hyderabad cricket forward and we are ready to host many more international matches in the future when the BCCI asks us come what may,” he said.

Hyderabad was earlier supposed to host the third T20I on December 11 but the BCCI was forced to shift the first game of the series from Mumbai after Mumbai police refused to provide security for the match as it coincided with the anniversary of the Babri Masjid demolition and the “Mahaparinirvan Din” of Dalit icon BR Ambedkar.

How will you measure your life? Charles Assisi pays tribute to a mentor

AIADMK seeks to reach out to Muslims, says it will not allow any measure against minorities in TN
India News

Budget on a tight leash
We and our partners use cookies on this site to improve our service, perform analytics, personalize advertising, measure advertising performance, and remember website preferences.Ok