Smith was seen wearing a pair of glasses while celebrating with his team mates in a huddle during Australia's victory celebrations after the visitors retained the Ashes with a 185-run win that gave them a 2-1 lead in the series. 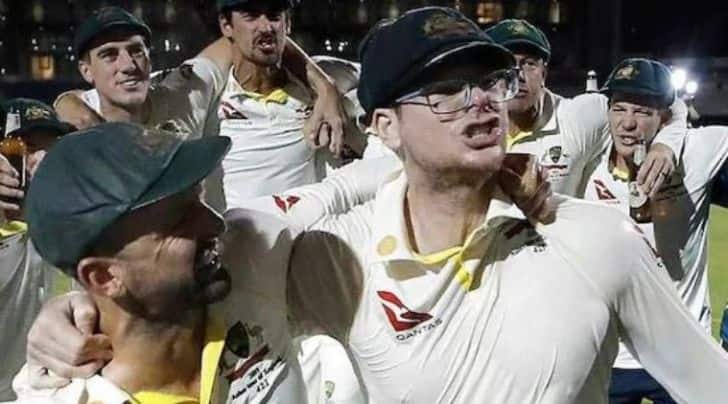 Smith was seen wearing a pair of glasses while celebrating with his team mates in a huddle during Australia’s victory celebrations after the visitors retained the Ashes with a 185-run win that gave them a 2-1 lead in the series.

Leach was an unlikely hero in the third Test at Headingley when he came in at number 11 and helped centurion Ben Stokes chase 359 to win. The spinner was seen repeatedly wiping his glasses between deliveries.

“Experience tells me, when you’re doing well people try and pick holes in you,” Langer told reporters. “I was there, I know the truth, they were talking about Chris Rogers who was here four years ago and that is actually the truth.

“Chris Rogers is a great mate of the squad and that’s what it was about. People can make of it what they like, we can’t do anything about what people make of it.

“I think everyone in this room, everyone around the world has seen the great spirit the World Cup and this series have been played in. There’s been great spirit throughout… People can make of it as they like but that’s the truth.”

While Smith is the leading scorer in the series with 671 runs in three tests, team mate David Warner has struggled, scoring only 79 runs in eight innings with three ducks. However, Langer said he was not worried about the opening batsman’s form.

“He’ll be fine… Davey hasn’t had a great series, there’s no secrets about that. But he’s also a world class player,” Langer added.

“I’ve said throughout the whole series if Davey has one good innings it will help us win the Ashes. He probably hasn’t been through this lean run before, so it’s going to be a good test of his character and we know what a great player he is.

“He’s had a huge World Cup, he had a huge IPL… He’s a world class player, he’s a match winner. He’s been brilliant around the group since he’s been back.” The final test at the Oval in London begins on Thursday.