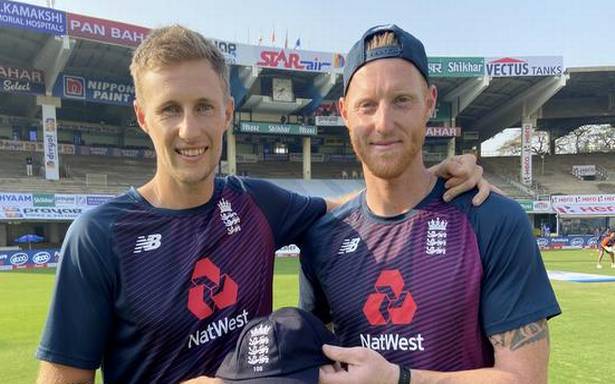 The England captain a stylish right-hander, got it from star all-rounder Stokes prior to the start of the Test at the M.A.Chidambaram stadium in Chennai

It was a special moment for England captain Joe Root as he received a cap from team-mate Ben Stokes for featuring in his milestone 100th Test in the first match of the series against India here.

The stylish right-hander was handed the special cap by star all-rounder Stokes prior to the start of the Test at the M A Chidambaram stadium.

He was also presented a special cap by England national selector Ed Smith on the occasion.

Root had made his debut against India in the 2012-13 tour and also played his 50th Test against the same opponent in Vishakapatnam in 2016.

The 30-year-old Root has scored 8,249 runs with 19 centuries and 49 half-centuries before this Test.

Wicketkeeper-batsman Jos Buttler, who is playing in his 50th Test, also received a special cap from Root.

The England players wore black armbands as a mark of respect for inspirational war veteran Captain Sir Tom Moore, who died aged 100 earlier this week after being admitted to hospital with coronavirus, the ECB media manager said in a statement.