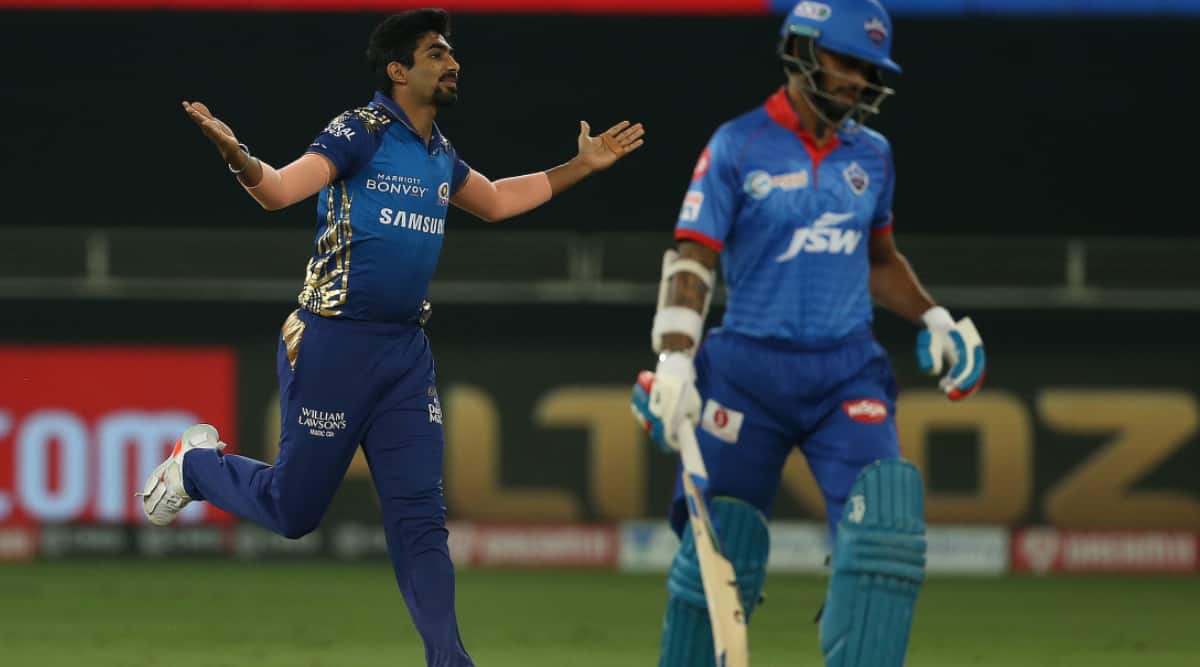 In the end, the much-anticipated, high-voltage encounter turned out to be anti-climatic. While fortunes waxed and waned during Mumbai’s innings, both teams seizing grip over certain passages of the game, Delhi’s reply ended in the first eight balls of their chase of 200. Two down in the first over, three in the second, without registering a single run on the board, Delhi Capitals were knocked out in the blink of an eye. Marcus Stoinis and Axar Patel resisted and dragged them back onto their feet, but it was a bridge too far for them to cross. The 57-run win taking the defending champions into another IPL final, while DC wait for the winner of Friday’s Eliminator.

On nights as these when Trent Boult and Jasprit Bumrah are in a destructive mood, batsmen could only curse that they took the wrong job. They make destruction look easy, with smiles that seldom leave the lips and glints in their eyes. They don’t stare, they don’t cuss, they don’t even care that batsmen exist. That is until they are at the top of their run-up sizing up the batsman.

Sometimes, a mere glance at the batsman would reveal what they need to do. No need of elaborate thinking or recalling sessions with the video analyst. Just like googling a celebrity on the net. Boult just looked at Prithvi Shaw’s feet. He saw the front foot facing long-off, the stance slightly open, indicating that he is pre-empting one of Boult’s fabled in-swingers. Boult just slipped one across him with the angle. Shaw nibbles and nicks.

Ajinkya Rahane is a far more pedigreed and experienced batsman than Shaw, who seems to be in the middle of a genuine struggle. But he could not decipher Boult’s plans either. The left-hander’s staple double-bluff. Two with the angle, drawing him to the drive and beating him, before the nip-backer that blasted his pads. If only cricket were this simple, one would think.

It was Bumrah’s turn to rattle next. A typical short-of-length ball followed-up by a searing, inch-perfect yorker, so perfectly designed that it seemed threaded through the eye of a needle. It swung in the air, moved a smidgen off the pitch, took a faint deflection off Shikhar Dhawan’s back leg and thudded into off-stump. The left-hander played a nothing shot. He didn’t have the time to think of a proper stroke.

If Boult’s wickets were the stuff of dreams, Bumrah’s belonged to the theatre. From 0/3, an escape route was non-existent. Even humiliation could not be escaped. In the next over, Bumrah snared a bemused Shreyas Iyer, the Delhi captain who seemed numb at the chaos unfolding in front of him. Bumrah still had time to come back and annihilate Delhi with a two-wicket burst when Stoinis had revived remote hopes of a heist. The combined figures of Boult and Bumrah read: 6-2-23-6. That’s T20 gold.

There is a ludicrous simplicity about Hardik Pandya’s big shots — the cross-batted swipes and heaves through midwicket and the flat-batted slaps through the off-side. He opens up his stance, goes across and back into the crease, so back that his back foot almost hugs the stumps, and then swings fluidly whichever way he wants.

The base is so strong, the balance so impeccable and the head so still that, the method opens up a large vista for him, the arc from point to square-leg. He could pull, he could heave over deep midwicket, and slash behind point or through the covers. He can even bludgeon it straight over the bowler’s head.

The initial movements empower him to swing his arms at length balls; they also enable him to get under fuller balls and hit through the line. Not that he can’t smack sixes off a straight bat, but in T20s, his preferences are different. The movements are so simple and seamless that he doesn’t get into awkward tangles. Beneath the simple method shone his clarity of mind and unflappable confidence. He seems totally immune to pressure and, in the future, could get an extended audition for the finisher role for the country.

Though Hardik’s methods are familiar to bowlers, it can disrupt as much as irritate them. Both Kagiso Rabada and Anriche Nortje would offer painful testimonials, as Hardik went on a carnage, smoking an unbeaten 37 off 14 balls, punctuated with five sixes, two each of the vaunted South African pair. It was the difference between Mumbai settling for a 160-thereabouts total or the daunting 200 they eventually finished at.

Spare a thought for Ravichandran Ashwin, though, whose exhibition of spin bowling was of the highest class. Rohit Sharma’s dismissal is worth repeat-binging. The ball arced and formed a lovely curve after it left Ashwin’s fingers. It curled into Rohit like a miniature frisbee, before it dipped and spun back to strike his pad. It was dreamy deception — an intoxicating concoction of drift, dip and turn. Thus for all the quality batting the night had witnessed, it belonged to the bowlers. Two fast men and a spinner.

Caught on the wrong foot
We and our partners use cookies on this site to improve our service, perform analytics, personalize advertising, measure advertising performance, and remember website preferences.Ok