Mumbai Indians vs Royal Challangers Bangalore has always been a star-studded encounter. From the days of featuring the likes of Sachin Tendulkar, Rahul Dravid and Anil Kumble, it has evolved into being billed as a battle between Virat Kohli and Rohit Sharma's sides. The 13th season of Indian Premier League (IPL) was originally scheduled to kick off on March 29. The Covid-19 virus played spoilsport, however, bringing the sporting world – and with it the IPL – to a standstill. With the IPL season postponed indefinitely for the time being, we at indianexpress.com decided to jog some memories and relive some of the best clashes between the franchises and standout performances. Mumbai Indians (MI) vs Royal Challengers Bangalore (RCB) was set to be the blockbuster match of the day (Sunday, April 5) according to the original schedule.

Mumbai Indians vs Royal Challangers Bangalore has always been a star-studded encounter. From the days of being billed as a battle between the dream Sachin Tendulkar-Sanath Jayasuriya opening pair and the cool-headed Anil Kumble-Rahul Dravid combination, it has evolved into being billed as a battle between two of India’s biggest cricketing superstars – Virat Kohli and Rohit Sharma.

Here’s looking back at a few unforgettable encounters between the Mumbai and Bengaluru franchises, records in this encounter and some whirlwind individual performances.

Head to Head: MI and RCB have met 27 times. MI have won 18 times and RCB have won 9 times. In recent years, the dominance MI have enjoyed over RCB has only increased. In fact, since the IPL 2016 season, RCB have managed to beat MI only once, while MI have beaten RCB seven times in this period.

The highest T20 score in AB de Villiers’s career and one of his four centuries in the shortest format occurred in the IPL 2015 match between RCB and MI. Joining Virat Kohli (82* off 50 balls) in the fourth over of the match, De Villiers embarked on his biggest T20 carnage. The pair added 215 runs in the remaining 16 overs, taking RCB’s score to 235/1 at the end of 20 overs. 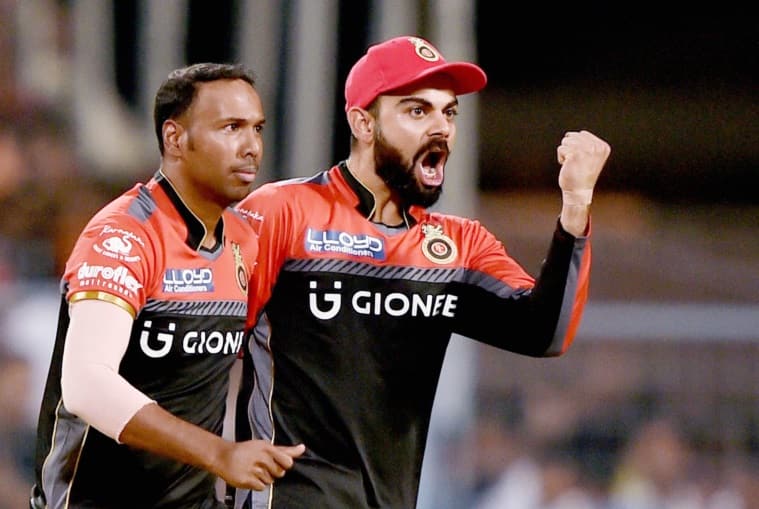 Samuel Badree’s one-man show in the IPL 2017 match against MI came in a losing cause, but showed the impact a spinner can have with the new ball in the shortest format. RCB, needing to defend a most total of 142, started their bowling with the West Indies spinner. Badree got a hat-trick in his second over, including the scalps of Parthiv Patel and Rohit Sharma. At the end of 3 overs, MI were struggling at 7/4. However, they would eventually recover, with Kieron Pollard taking them to victory. 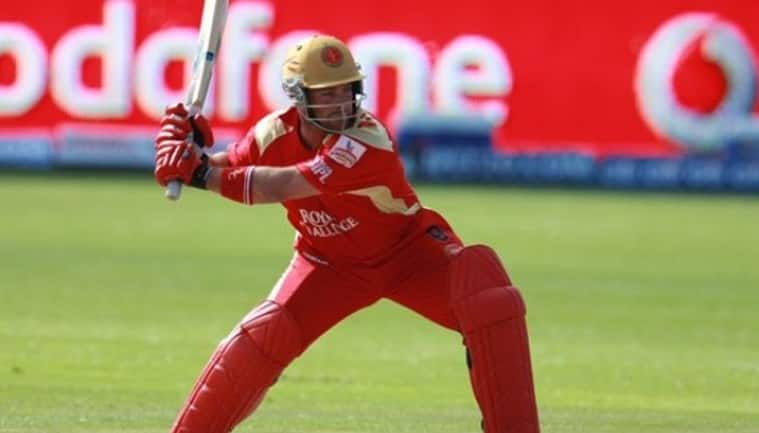 In this match dominated by South Africans, Mark Boucher and Jacques Kallis overpowered Shaun Pollock’s efforts to seal a thrilling win for RCB. Set a challenging 166, RCB rode on an unbeaten 39 from Boucher, and his 55-run stand with Kallis sealed a five-wicket win for them with two balls to spare.

Chasing 166 for a win, RCB were given a stable start by skipper Rahul Dravid (32 off 33 balls). However, with the match nearing a tense finish – 60 needed from 39 balls – and Kallis running out of partners, he finally found an able ally in Boucher.

With Kallis trying to take the match to the end, Boucher took up the proactive role. He creamed Harbhajan Singh and Sanath Jayasuriya for big shots and then pulled Ashish Nehra for four and then blasted him out of the ground for the biggest six of the game in successive balls, bringing the requirement down to 11 from 12 balls needed and eventually RCB to victory. 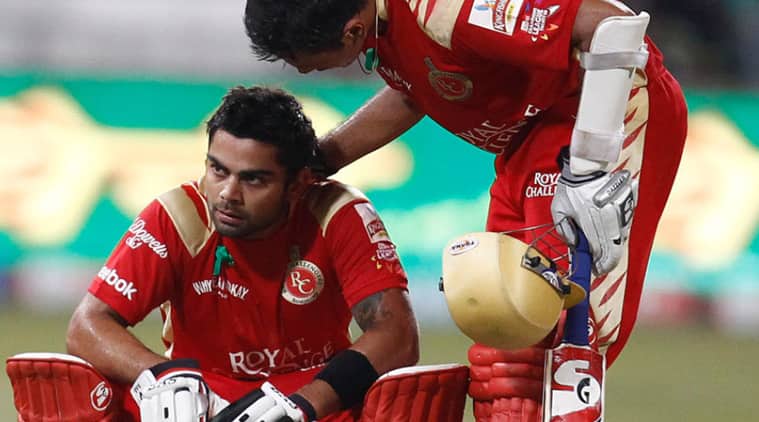 MI prevailed over RCB in this last-ball thriller, as the young Virat Kohli fell just short of pulling off a famous win.

Once again chasing 166 for the win, RCB were once again given a start by skipper Dravid (71* off 58 balls), even as wickets fell all around him. When Kohli joined Dravid in the middle, RCB needed 66 to win off the last 6 overs. Kohli exploded from the very start, with Dravid holding the other end.

Kohli’s 24-ball 47 then took the equation to 40 needed off 18 and then down to 13 required off the last over. Zaheer Khan, bowling for MI, began with two superb slower short balls, but two low full tosses were smashed by Kohli for two leg-side boundaries. Three required off the last ball. Zaheer bowled another low full toss but Kohli’s wrists turned a fraction of a second earlier and got the leading edge. Ambati Rayudu held his nerve when a drop would have produced a tie. Kohli went down on his haunches in disappointment. Dravid went up to him and lauded his effort. RCB fell short by 2 runs. This was a match dominated by the two respective lower orders after star batsmen from both the sides failed to turn up. This match also had various kinds of drama – delays due to rain, a floodlight failure, an unbelievable four free-hits in a row, a hit-wicket, and Munaf Patel being caned for 24 in the final over of the first innings by 21-year-old Mayank Agarwal.

Agarwal slammed a 30-ball 61, his first IPL half-century, to rescue RCB, but Ambati Rayudu and Kieron Pollard blasted fifties of their own to take Mumbai Indians to a last-over win.

RCB, having finished their main bowlers’ quota off early on, threw the ball to Chris Gayle for the last over, with 14 runs to defend. Gayle looked to fire everything flat and fast into the pads but Pollard effortlessly launched the second ball for six over midwicket, before a streaky four past third man and a pull over midwicket took Mumbai Indians home with two deliveries to spare. 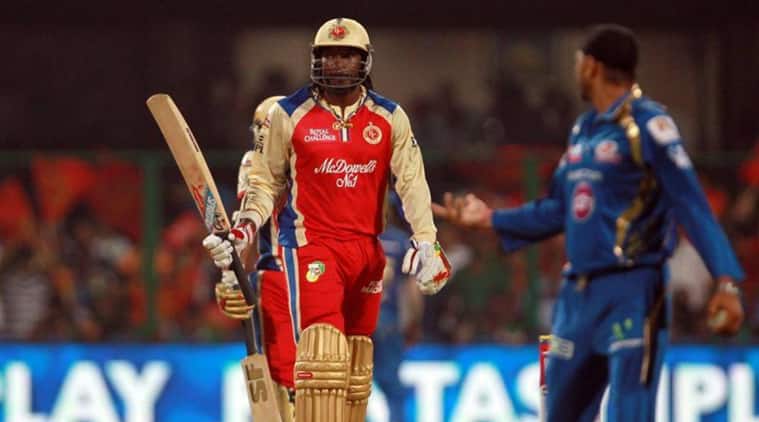 The 2013 IPL match between RCB and MI was a one-man show, with Chris Gayle playing one of his classic T20 knocks. His unbeaten 92 from 58 balls, even as nobody else in the side could get going, took them to 156 for 5. After Gayle, the next highest Royal Challengers score was 24, from Virat Kohli.

Gayle’s lone hand began with uncharacteristic reticence, as the Mumbai seam bowlers, led by Mitchell Johnson, found bounce and movement on the grassy Chinnaswamy Stadium surface. After the end of the first Powerplay overs, RCB only had 31 runs, off which Gayle had scored four runs – off 10 balls. It was only in the ninth over of the innings that Gayle shifted to higher gears and from then on there was no stopping him.

MI needed 17 runs from the last two overs of the chase. A terrific penultimate over from Jaydev Unadkat conceded only seven runs. Mumbai arrived in the 20th over only three wickets down, and needing 10 runs for victory, but a double-strike from Vinay Kumar tilted the tie effectively in RCB’s favour. Rohit Sharma masterminded the chase in this match to ensure that MI qualified for the playoffs. Rohit had been in indifferent form before this match, also having dropped himself down the order. However, with a lot on the line as teams rushed to collect a few final points from the league stage of the IPL 2017 season, Rohit Sharma signalled his newfound maturity by playing a responsible hand under pressure.

Dealing in calculated blows, Rohit ended up with 56 off 37 without taking any big risks as Mumbai won with one ball to spare.