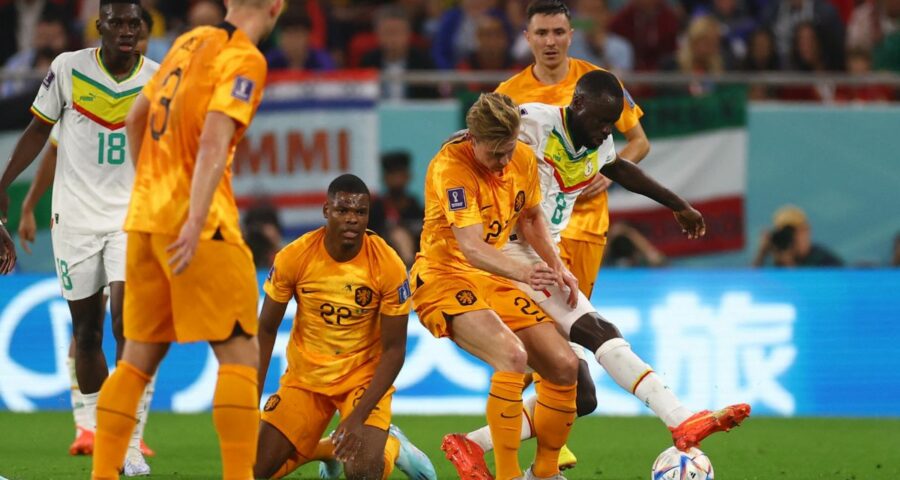 Two of the Netherlands’ brightest young talents were not at their best on Monday yet still combined to help produce a World Cup win as the Dutch beat Senegal 2-0 in their Group A opener.

Frenkie de Jong’s deft chip was expertly met by Cody Gakpo to break the deadlock late in the game and reflect the narrow margin of superiority the Netherlands held over the African champions across the 90 minutes at the Al Thumama Stadium.

It could either be an ominous sign of their potential that they were able to win despite being below par, or something that coach Louis van Gaal needs to work on if his side is to live up to his prediction that they could go far in this World Cup.

The 23-year-old Gakpo, one of the most sought-after talents in European club football who is almost sure to make a major move next year, was hardly involved in the game yet emerged as the hero of the victory.

His 36 touches in the match were only four more than goalkeeper Andries Noppert and not in keeping with the high-tempo, pass-filled football that is a hallmark of the Dutch approach.

De Jong, who has struggled at Barcelona this season, is the engine room of the Netherlands side, either driving them forward with clever passes or surging runs, but on Monday he was guilty of holding onto the ball too often, thereby preventing a flow to their attack. It also meant he was dispossessed and, once or twice, that resulted in dangerous situations.

But when the Dutch were able to turn up the tempo and combine, they swept into scoring positions and should have been two goals ahead in the opening 20 minutes. Ironically the chances were spurned by Gakpo and De Jong.

Gakpo was quick to agree they had been sloppy in his post-match analysis.

“We weren’t good on the ball, and we must go and have a good analysis of why,” he told Dutch television.

Senegal struggled without the influence of Sadio Mane although Ismaila Sarr, moved across to the left, valiantly attempted to make up for the absence of their injured talisman.

But he had none of the counter-attacking pace that makes Mane such a match-winner.

Senegal’s other top players will look back at the game with disappointment. Centre-back Kalidou Koulibaly was easily beaten at several set pieces by his Dutch counterparts and keeper Edouard Mendy must take some responsibility for the goals conceded.

He was late coming out to try and punch the ball away as Gakpo got his head to De Jong’s cross and then let Memphis Depay’s meek shot slip from his grasp for Davy Klaassen to add the Netherlands’ second deep in stoppage time.