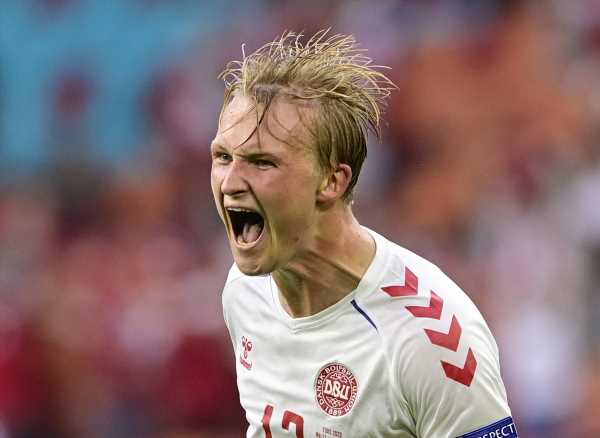 It was only fitting that Kasper Dolberg returned to his old stomping ground in Amsterdam, a place that shaped his professional career, to inspire Denmark to the European Championship quarter-finals with a 4-0 win over Wales.

Dolberg, a 23-year-old powerfully-built forward from Silkeborg, started out on the left wing before he found his shooting boots at Ajax Amsterdam under the watchful eyes of then assistant coach Dennis Bergkamp in 2015.

While his style has been often compared with another Dutch great Marco van Basten, Dolberg’s ability to find pockets of space in forward areas underlined the influence of Bergkamp – the gold standard for modern Dutch playmakers.

His playmaking ability was once again at the forefront at the Johan Cruyff Arena as he played a neat give-and-go with Mikkel Damsgaard between the lines, before using two Welsh defenders as a shield to curl the ball into the far corner. Dolberg nearly doubled the lead with a well-timed backheel flick that was saved by Wales goalkeeper Danny Ward, but made amends when he cashed in on a defensive error from Wales defender Neco Williams to score from close range.

In his first start of the tournament in the absence of the injured Yussuf Poulsen, Dolberg thrived as the focal point of Denmark’s attack to give coach Kasper Hjulmand a selection headache before the quarter-final.

With his team in the driving seat against The Dragons, Dolberg was substituted in the 69th minute and received a standing ovation from thousands of Danish fans who made their first away trip of the tournament after three games in Copenhagen.

“I actually don’t know how I feel. This is total madness,” said Dolberg, who won a league title with Ajax before joining Nice in 2019.

“It was here it all started for me, and to play here again in this setting was insane,” he told Danish broadcaster DR. Denmark finished with an emphatic and deserved win after weathering a Welsh storm in the opening 20 minutes.

They struggled for control at the start and were forced to switch from Hjulmand’s reliable 3-4-3 system to a back four, pushing defender Andreas Christensen up as a defensive midfielder to support Pierre-Emile Hojbjerg and Thomas Delaney.

Christensen slotted in effortlessly in the midfield as the Danes increased their tempo going forward while the defender was also quick to track back and bail out his defence in set-piece situations.

“We are able to be flexible. Everything wasn’t perfect during the game but we improved and that’s something we’ve done several times,” Hjulmand said.

Full back Joakim Maehle, another beneficiary of the new fluid system, made it 3-0 in the closing stages before Braithwaite got on the scoresheet as Denmark booked a place in the quarter-finals for the first time since 2004.

“The self-confidence and the courage we bring is something we must take even further,” Maehle told TV3. “We’re not worried who we’re going to meet. We are focusing on ourselves and our qualities.”