IMAGES from the English Premier League matches played on Wednesday 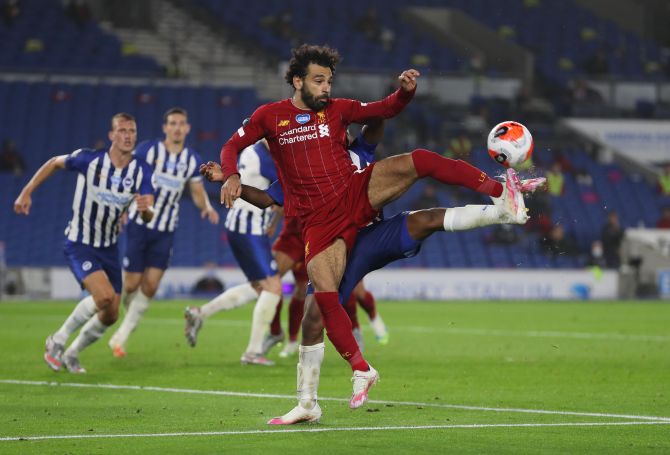 Mohamed Salah scored twice as champions Liverpool moved on to 92 points with a 3-1 win at Brighton and Hove Albion in the Premier League on Wednesday.

The victory kept Liverpool on target to secure a record Premier League points tally, with Juergen Klopp’s side needing nine from their remaining four games to beat the mark set by Manchester City, who amassed 100 points in 2017-18.

Liverpool were 2-0 up within eight minutes after Brighton paid heavily for sloppy work in their attempt to play the ball out from the back.

Naby Keita robbed Davy Propper and slipped the ball to Salah who confidently drove home to open the scoring in the sixth minute.

Two minutes later and Brighton were caught out again by Liverpool’s pressing, this time Salah setting up Jordan Henderson who finished with a perfect drive.

Graham Potter’s 15th-placed team pulled a goal back on the stroke of halftime with Leandro Trossard sweeping home a first-time shot after a pinpoint cross from Tariq Lamptey.

Brighton, who recovered well from their poor start, should have drawn level on the hour when the ball fell to an unattended Dan Burn at the back post but he failed to test Alisson with a poor connection.

Egyptian Salah wrapped up the win, Liverpool’s 30th in their 34th game of the season, with a superbly angled near post header from an in-swinging Andy Robertson corner.

Klopp had given a first league start to 19-year-old Neco Williams at left back but replaced him at the break after he picked up a yellow card.

The only negative for Liverpool was the loss of Henderson to a knee injury 10 minutes from the end.

Salah now has 19 goals, three behind Leicester City’s Jamie Vardy in the race for the “Golden Boot”.

Klopp said he was unconcerned about the chance to beat the points record.

“It’s not important for me, I’m not interested in any of this but I want to win football games. For sports people in general it might be important. We are champions and it could be softening but it is not – the boys go with everything,” he said.

“We now have 92 points and last season we had 97! We got five points more than this last season – that’s unbelievable, I have no idea how we did that.”

Liverpool host ninth-place Burnley at Anfield next, followed by Arsenal away, Chelsea at home and Newcastle United at St James’ Park in the final game. David Silva scored one goal and made two more as Manchester City put on a passing masterclass to overwhelm Newcastle United with a 5-0 Premier League victory on Wednesday.

Having announced that he will leave the club at the end of this season after a 10-year spell, the 34-year-old Spanish playmaker showcased all of his considerable skills as City demolished a rudderless Newcastle.

Boss Pep Guardiola heaped praise on City captain Silva, saying that fans would be given a proper chance to say goodbye at some point in the future.

“He’s coming back to make the farewell game in front of all the fans, because he’s an incredible legend,” Guardiola told BT Sport.

“He’s a huge competitor, in small spaces, in the pockets, I never saw a player like him.”

The victory moved second-placed City up to 69 points with four games of the league season remaining while Newcastle are 13th on 43.

Gabriel Jesus put the home side ahead in the 10th minute, stabbing home Silva’s clever pass, and Riyad Mahrez made it 2-0 in the 21st minute when Kevin De Bruyne pulled the ball back for him to sweep home from the penalty spot.

Things went from bad to worse for Newcastle in the second half when Matt Ritchie’s last-ditch attempt to dispossess Jesus hit fellow defender Federico Fernandez and flew into the goal to put City 3-0 up.

Silva got himself on the scoresheet in the second half, stroking home a beautiful free kick from the edge of the box in the 66th minute, and he would have had a second if not for a brilliant reflex save by Newcastle keeper Martin Dubravka.

Guardiola handed a Premier League debut to 18-year-old midfielder Tommy Doyle, both of whose grandfathers played for the club, in the second half.

Though the City players gave the teenager plenty of chances to make an impact, it was Silva that set up substitute Raheem Sterling for a simple goal in stoppage time to make it 5-0. The Hammers beat Chelsea and drew at Newcastle United last week, easing their nerves about the drop, but the loss to in-form Burnley left David Moyes’ side in 16th place on 31 points, just four points above 17th-placed Aston Villa who have a game in hand.

The winner came in the 38th minute when Charlie Taylor whipped in a cross from the left and Rodriguez’s glancing header flew in off the underside of the crossbar.

Michail Antonio missed a great chance to level moments later when he found himself one-on-one with Nick Pope but struck the outside of the post.

Pope, who has now kept 14 clean sheets this season, was in outstanding form, dominating his box and nullifying cross after cross thrown into the box by the home side.

Sean Dyche’s Burnley, who are in ninth place on 49 points, had an effort from substitute Chris Wood ruled out in the 76th minute for offside and the Kiwi also forced a good save out of Lukasz Fabianksi.

But the Clarets had to defend with tenacity in the final period as West Ham piled bodies into the box — only to come up against the inspired Pope, who caught or punched clear every danger.

“Right from the front we defend properly. Lads running until they can’t anymore. It gives defenders and me in goal confidence, it runs through the team,” said Pope.

“For a so-called not top-six team to get that many clean sheets, we go into every game pushing to win. It was wave after wave towards the end, sometimes you have to do that on the road,” he said.

Burnley have lost once in their last 12 Premier League matches and won three of their last four matches.