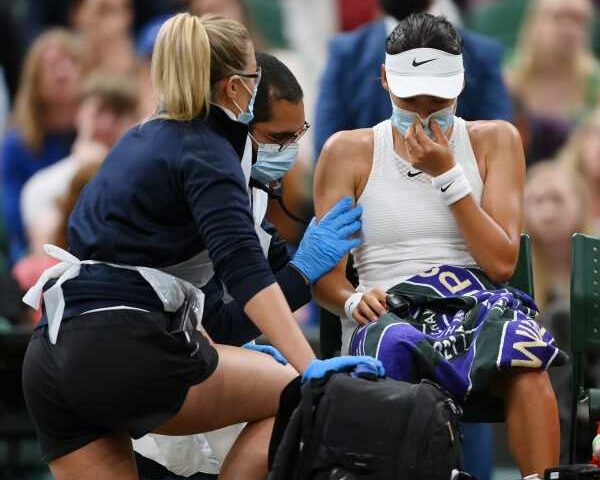 British teenager Raducanu’s run over as she quits against Tomljanovic British teenager Emma Raducanu’s fairytale Wimbledon debut ended in distressing circumstances as she was forced to retire against Australian Ajla Tomljanovic after suffering breathing difficulties in the fourth round on Monday.

The 18-year-old wildcard, ranked 338 in the world, went toe-to-toe with the experienced Tomljanovic in a brutal first set full of intense baseline exchanges.

But after being broken in the 10th game to lose the first set 6-4 she appeared to be struggling physically as she slipped 3-0 behind in the second set on a raucous No.1 Court.

Raducanu sat down on her chair where she was checked over by a medic before going off the court to receive treatment.

After several minutes the umpire announced that Raducanu was unable to continue, to groans of disappointment from the crowd.

The All England Club later confirmed that Raducanu retired from the match because of ‘difficulty breathing’.

World number 75 Tomljanovic, who played superbly to fend off the youngster in the first set, saving break points at 4-4, is through to her first Grand Slam quarter-final where she will face top seed and compatriot Ash Barty on Tuesday.

“I am actually shocked because Emma must be hurt if she came to the decision to retire,” the 28-year-old Tomljanovic said on court. “I am really sorry for her, I wish we could have finished it. I am wishing her all the best.”

“I thought I found my groove although Emma was hurt and not at her best which kind of explains it.”

Fourteen home players started out in the men’s and women’s singles, not including British number one Johanna Konta who was forced to pull out after a COVID-19 positive in her camp.

Few would have imagined Raducanu would have been the last one standing, but after three superb wins the London-based youngster had become the talk of the town with her eye-catching game and interesting family background.

She was made to wait until 8pm to start against Tomljanovic because of the preceding five-set men’s singles match between Felix Auger-Aliassime and Alexander Zverev.

With the roof closed because of rain the stage was set for the next thrilling instalment of Raducanu’s adventure.

Understandably there were nerves as she served two double-faults in her opening service game, but managed to hold.

Raducanu looked increasingly confident, however, and had a break point at 3-3 and another two at 4-4, punching the air and whipping up the crowd after a sublime backhand down the line.

But Tomljanovic showed great fortitude to wriggle out of the crisis and Raducanu came under intense pressure as she served at 4-5, one lung-busting rally leaving her leaning on her racket trying to suck in some air.

Tomljanovic then converted her first set point as Raducanu blazed a forehand long.

The effects of a gruelling first set had clearly taken a toll on the British player as she dropped serve at the start of the second set.

Raducanu threw everything at Tomljanovic to try and get the break back in the next game but was clearly in difficulties and a hooked forehand wide to go down 3-0 ended up being her final shot of a remarkable Wimbledon debut.