‘There was a visitor on the field to delay the start of the match.’ 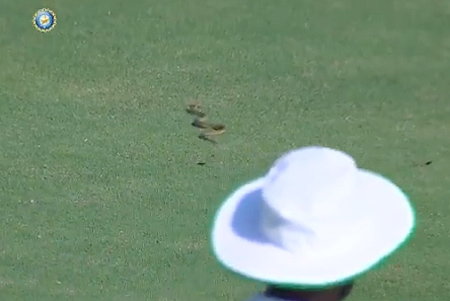 In a bizarre incident, the start of a Ranji Trophy match between Vidarbha and Andhra on Monday was delayed by a few minutes after a snake entered the ground in Vijaywada.

Vidarbha captain Faiz Fazal won the toss and elected to field. However, as the players made their way to the middle, a snake was spotted on the field and it resulted in a delay of few minutes.

“SNAKE STOPS PLAY! There was a visitor on the field to delay the start of the match,” BCCI Domestic tweeted a 13-second video.

The official Twitter handle of BCCI Domestic posted a video in which the snake can be seen gliding on the field while seven to eight groundsmen trying to ensure that it slithers away.

Image: A snake enters the cricket ground in Vijayawada

PM Modi visited 58 countries since 2015: MEA
We and our partners use cookies on this site to improve our service, perform analytics, personalize advertising, measure advertising performance, and remember website preferences.Ok