‘After his back injury, he needs to look after himself.’
‘He needs to keep working on his bowling.’ 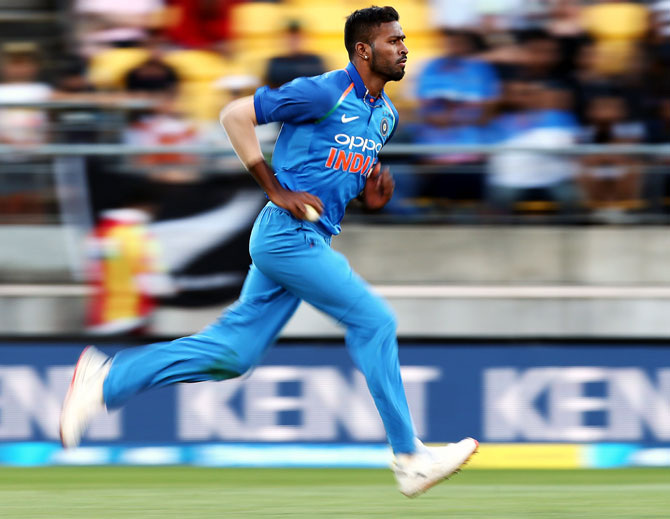 His cricketing career might not have gone to plan, but Irfan Pathan is ensuring that no young cricketer in the country suffers the same fate as he did, especially in strife-torn Jammu and Kashmir where he has taken a huge interest in reviving the sport in the last couple of years.

With Pathan in charge as the coach-cum-mentor, J&K have not only improved their showing in domestic cricket, but have also seen two of their young cricketers make it to the Indian Premier League in the last couple of seasons.

The Cricket Association of Pathans, an academy which he founded along with elder Yusuf Pathan, is also showing good results with its alumni playing district cricket. Some of them have gone on to play in the Ranji Trophy.

“I am glad that I left all the lucrative league offers and I chose Jammu and Kashmir cricket. Doing something for yourself is one thing, but making a difference in the lives of others is something that gives you a lot of satisfaction,” Irfan Pathan tells Rediff.com‘s Harish Kotian in the final segment of a four-part interview:

One of the guys you have seen come up in Baroda must have been Hardik Pandya, who is also a seam bowling all-rounder like you.
Do you see him playing an important role for Team India in the next few years?

Any all-rounder is an important part of their team because they are very rare.

As long as he keeps his head cool and as long as he looks after his body, he will be an asset.

In terms of bowling, I really believe he needs to keep working at it.

Talking about his batting, the big hitting ability has always been there even at that time when he first came to Baroda to play domestic cricket.

Injury management is very crucial because Bumrah is a guy who had some injury history. But injuries are part and parcel of the game and every fast bowler goes through it.

And after the recovery, you should play a lot of matches at domestic level before you play for the Indian team.

I did that same mistake after my injuries because the team management requested me to come back quicker. I did that and it really affected me in some part of my career.

During your playing days, did you ever face any racist comments or any comments on the field on your skin colour or religion?

When you play cricket, these things keep happening.

Some people cross the line, some people show their character, some people try to play mind games, so I used to take it as it came.

Sometimes I used to answer them back, but majority of the times I just focussed on my game.

Under your guidance, the fortunes of the Jammu and Kashmir team has changed. How satisfying has it been to coach kids in the valley?

I would have loved to do that job for Baroda which I kept doing without even having the mentorship tag on me. I did that for 10 years.

So, I wanted to retire, go out and play leagues. But when this opportunity came in — at that meeting, Kapil paaji (Kapil Dev) was there as well. Venkatesh Prasad and Ashiq Ali Bukhari (Jammu and Kashmir Cricket Association CEO) were also present.

They wanted me to take up that challenge and make a difference to Jammu and Kashmir cricket. They needed someone to come there and help the cricketers in the state.

I am glad that I took that opportunity.

I am glad that I left all the lucrative league offers and I chose Jammu and Kashmir cricket and made a difference to some of the guys who are now playing the IPL.

I am really glad that I took up that opportunity and challenge and made a difference to these guys.

It has been the most fulfilling two years of my career because it came after lot of hard work as well. It was not an easy place to work, a lot of complications are there. Despite that, a lot of players are coming and that gives me the greatest satisfaction.

Doing something for yourself is one thing, but making a difference in the lives of others is something that gives you a lot of satisfaction.

You also started the Cricket Association of Pathans with your brother Yusuf. How is the academy coming along?

We are very happy because we are able to do some good work through the academy. A lot of young players are now playing district cricket and some of them have even played Ranji Trophy.

Two years back we had given scholarships to 17 kids for one year, some of them were army kids. We have a lot of female cricketers training at our academy.

It feels really great to get the academy going and be able to do something for the young cricketers in India.

What are you planning in your second innings?

I will keep fulfilling my role as the all-rounder.

I will keep doing everything I can. I have a Tamil movie coming up and I have other offers as well.

Maybe you could see me playing some cricket here and there.